A mechanic in Pune, Javed Sheikh, built a toy car in his garage fulfil his six-year-old daughter’s wish of having her own car.

It took the father-son duo four months to complete

Javed Sheikh made a toy car for his six-year-old daughter Tanjila which was made of metal. The car can be driven on a road, going up to 40 km/hr.

During India’s ongoing border tensions with China, Javed and his father Hussain Sheikh decided to abide by India’s PM Narendra Modi‘s initiative to ‘Make in India‘.

In September 2014, the Indian PM launched an initiative to expand the Indian manufacturing hub, and reduce imports.

Javed decided to build a car for his daughter in collaboration with his father. 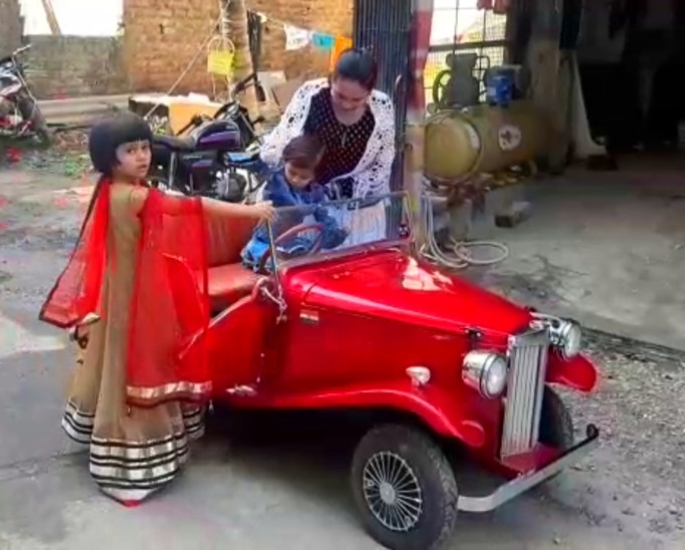 The production process cost Rs 40,000 (£400), with a red metal body unlike the plastic used in toys imported from China.

The car repurposed the engine of an old scooter which gave the car a top speed of 40 km/hr.

The toy car can hold up to 100 kg and can easily and safely drive Tanjila around where she wants to go.

Hussain declared that it was a prototype and there are more cars he will be building in time.

With an initiative like Javed Sheikh and the PM’s policies, India is soon looking to overtake China as the largest toy manufacturer of the world.

The Indian government has increased import tariffs by 20-60% to help local toymakers take back the industry.

“Consumption is not just a necessity but has become a language to express oneself.”

Attention deficit of working parents towards their children is certainly one of the reasons for the booming toy market, but keeping kids engaged is in itself a very big task.

So, here toys and gadgets come into play, Desai said.

Children are running the show, as working parents, richer and much busier than the previous generation, try to make up for their lack of time to spend with kids by pampering them and conceding to most their demands.

R Jaswant, marketing and sales head at Funskool, the second-largest toymaker in the country behind Mattel said:

“The influx of hi-tech electronic toys accompanied by electronic gaming gadgets is making the Indian toy market on its way to becoming one of the most advanced industries in the subcontinent.”

Akanksha is a media graduate, currently pursuing a postgraduate in Journalism. Her passions include current affairs and trends, TV and films, as well as travelling. Her life motto is 'Better an oops than a what if'.
Humza Arshad talks fighting Racism with Curry Powder
Is TikTok Making a Return To India?