Diary of a Badman star, Humza Arshad, and Neil Basu discuss growing up in a racist society and how the world can and must do better.

It was still a traumatic experience.

Youtuber star Humza Arshad sat down with Chief of Counter-Terrorism, Neil Basu. Together they spoke about racism, stereotypes and how his father fought racism using curry powder.

The much loved and famously known Diary of a Badman star, Humza Arshad, now uses his platform to aid the South Asian community as well as bring comedy and light to a dull world.

During his conversation with Neil, they both share stories about life in the 1980s and how it differs immensely from today’s society and culture.

Neil, whose father is Indian and mother is British, struggled growing up in a society where people judged him based on his skin colour.

He would get bullied at a young age but was completely oblivious to the harsh words said against him.

Although he stated that circumstances got better after high-school. It was still a traumatic experience. Especially to face it as a child and grow up with everyone treating you like you are different.

Humza agreed with him and explained that although he did not receive as much racism as Neil did growing up, he too has been subject to a lot of racial comments and slurs.

He then went on to tell a story about when his father was growing up.

At the time, there were people who would roam the street attacking Pakistanis. This was known as ‘Paki-bashing’.

Victims of such attacks were not just Pakistani. Anyone who had a tanned complexion was also labelled as a Pakistani despite being Indian, Bengali or of another race.

Humza’s dad was living with Humza’s uncle at the time. He had told his dad to always carry curry powder when leaving the house. He then said that if he was about to get attacked, he should throw the curry powder at the racist attackers and run.

Both Humza and Neil laughed at the unfortunate humour.

It is no secret that back in the era of his father growing up, society was much less accepting of other cultures. People of all faiths and backgrounds were labelled and attacked.

Although they both agreed that society has gotten better over time, Humza still exclaims that “it’s not good enough”.

Neil reminds Humza that in the 1970s and 1980s, life would be horrific. There were instances where a person of colour would walk down the street and hear tyres screech. Once they heard this they knew that an attack was to follow.

Neil went on to say that although we see our generation as having it rough, the generation before had it worse.

He referred back to Barack Obama’s speech where he tried to prove that the world is getting better.

They continue to discuss terrorism, South Asians within British politics and racism. 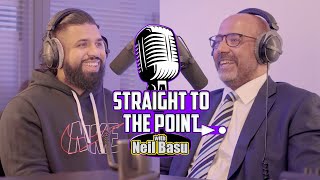 Ammarah is a Law graduate with an interest in travelling, photography and all things creative. Her favourite thing to do is explore the world, embrace different cultures and share stories. She believes, “you only regret the things you never do”.
Specially Created PUBG Mobile India Soon to be Launched
Indian Mechanic builds Toy Car to fulfil Daughter’s Wish