An Indian photographer from Karnataka has built a house which resembles a camera. The unique property has attracted online attention.

"It was our dream to build a house like a camera."

An Indian photographer has attracted a lot of attention for his newly-built house as it resembles a camera.

The unique house in Belagavi, Karnataka, has led to locals visiting it and taking pictures with it.

The three-storied creation by photographer Ravi Hongal is his expression of his passion for photography.

Ravi has been a photographer for over 30 years and while his love for the art is well-known in the area, his reputation has elevated following the completion of his house.

He and his wife Krupa revealed that it was their dream to build a house like a camera.

She said: “My husband is a photographer. It was our dream to build a house like a camera. We planned and built this house.

“We feel like we are living inside a different world, inside a camera. I am very proud of my husband.”

However, building the house was not easy.

Ravi explained: “I love photography and camera and everything related to it. Over the years a lot has changed in the area, but my love for it remains the same.

“It was my long-cherished dream to build a house that would look like a camera but I didn’t know how to build it, both in terms of executing the concept and monetarily.”

He said that he had to borrow money from friends and relatives.

“We also sold our previous house to build this house.”

After saving for years, he found some engineers and architects who could make his dream come true.

Key Concepts Interiors did the construction and interior designing which resulted in a large number of photography-related features inside and outside the house.

The house, named ‘Click’, has a window shaped like a viewfinder and another like a lens. It also has a wide film strip, flash and memory card. 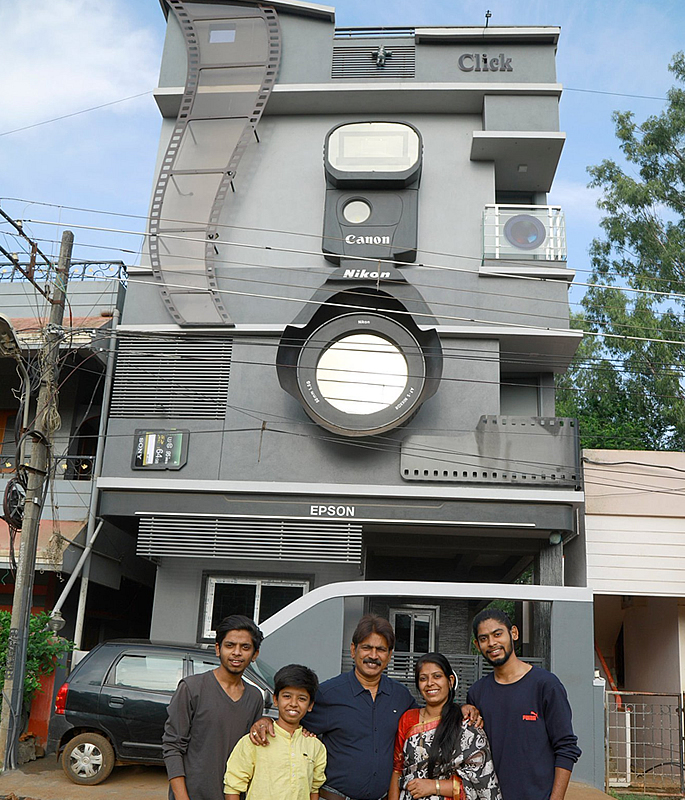 “There were challenges indeed, but they were open to my ideas and suggestions. I told them how I wanted a lens, lens hood and camera films in my designs, and while few were easier to achieve, others needed more work.

“I tried to help them with much input to get it just the way how I had imagined in my head. After two long years of many brainstorming sessions, finally, it became a reality.”

Ravi’s love for photography extends further than just the house. The Indian photographer even named his three children after camera brands.

Canon, Nikon and Epson each have a floor dedicated to them, with their names etched onto the wall.

“I have been photographing since 1986. Building this house is like a dream come true.”

“We also named our 3 children-Canon, Nikon and Epson. These all are three camera names. I love the camera and hence named them on camera companies name. My family were opposed to it, but we remain adamant.”

Eldest son Canon said: “My friends used to ask me whether it was my real name.

“Now, I tell them yes, photography is my father’s passion and hence he named me Canon.” 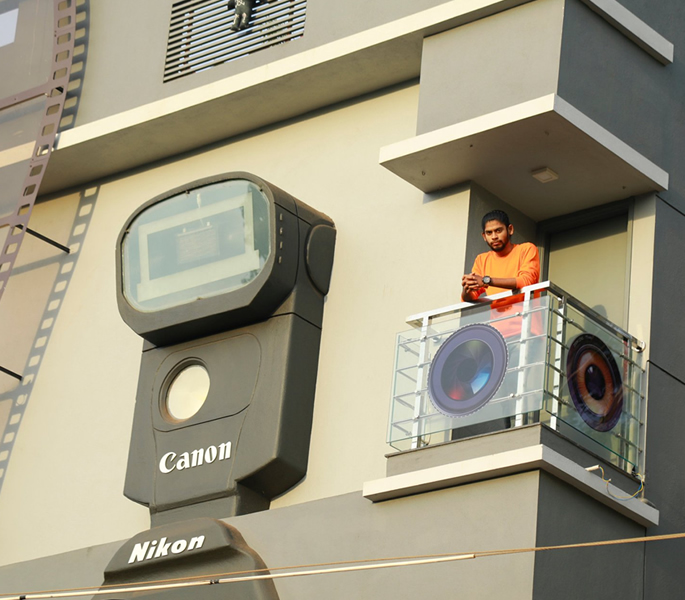 Pictures of the unique house have been shared on social media.

One person wrote: “This is called love for their passion.”

Another wrote: “A camera-obsessed photographer from India builds a camera-shaped house! 49-year-old Ravi Hongal has spent over $95,000 building the 3-story house, which looks like a camera in the town of Belagavi in India.”

“I didn’t anticipate it at all. It was my dream and I’m just happy that my passion is being recognised and people are enjoying it.

“I feel so happy and proud to see people stopping by to take photos and selfies.”

Dhiren is a journalism graduate with a passion for gaming, watching films and sports. He also enjoys cooking from time to time. His motto is to “Live life one day at a time.”
10 Amazing Indian Apps to Keep you Entertained
Pakistani Stars react to Pakistan’s Impending YouTube Ban