Man builds own Plane for Family Holidays to Europe

A London-based man takes his family on trips throughout Europe in a plane he built himself during the lockdown.

"This made me explore options"

A man has built his own four-seater plane to use for family holidays.

Now, Ashok and his wife fly around the UK and Europe with their two daughters.

Germany, Austria and the Czech Republic are just some of the countries they have visited.

Ashok is originally from Kerala. He moved to the UK in 2006 to pursue his master’s degree after earning his BTech from Palakkad Engineering College.

The mechanical engineer obtained his pilot’s licence in 2018. He rented a small two-seater aircraft, however, four-seater planes are hard to come by.

Ashok then came up with the idea of building his own aircraft.

He said: “Four-seaters are rare, and even if I could get one, they were very old. This made me explore options and learn about home-built aircraft.”

Ashok visited Sling Aircraft in Johannesburg and ordered an assembly kit so he could build his own plane.

He continued: “I learned about a Johannesburg-based company Sling Aircraft launching a new aircraft named Sling TSI in 2018.” 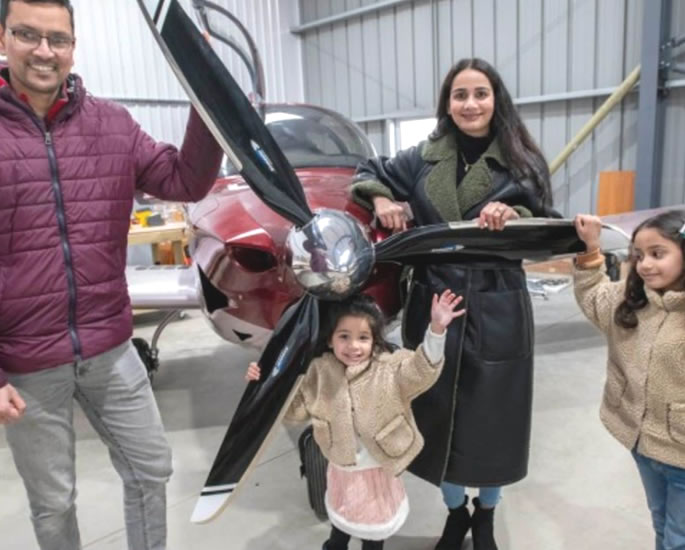 Ashok began building the aircraft during the lockdown in 2020 and the time gave him ample opportunity to work on the project.

From time to time, the construction was overseen by the UK civil aviation authorities.

It is reported that Ashok went on his first tip in the plane after completing the project in February 2022.

Discussing the experience, Ashok said: “It’s much more exciting than getting a new gadget.

“We started saving money during the first lockdown because we had always wanted our own plane.”

“Since we had been saving a lot of money in the beginning, we decided to try it out.”

Ashok and his family have travelled to various countries in Europe.

Laws in Europe and the United States allow for travel in home-built aircraft. Ashok now hopes the laws in India will allow for such travel.

Dhiren is a journalism graduate with a passion for gaming, watching films and sports. He also enjoys cooking from time to time. His motto is to “Live life one day at a time.”
Have Gender Roles changed in British Asian Homes?
The impact of Sania Khan’s Death on Divorced South Asian Women