The Indian Contribution to World War One

Commemorating the 100th anniversary of World War One, DESIblitz takes a look at the fearless contribution made by the Indian army to the British war effort; dubbed as the ‘forgotten heroes’.

“Seek ye first the recruiting office, and everything will be added unto you.”

World War I broke out on August 4, 1914. A devastating 4-year-long battle between the Allied powers and Germany, WWI cost almost 9 million lives, and was considered one of the deadliest wars of the modern world.

The effects of WWI were not limited to Europe and its inhabitants; they extended to all of the Commonwealth nations and territories across the globe that lived under colonial rule.

In 1914, the Indian Army was the largest trained volunteer army ready to go into battle, with 240,000 men at its peak.

They were bigger than the British Expeditionary Force, who although highly skilled, were limited in number, and were still awaiting the training of patriotic British volunteers who had only recently signed up. 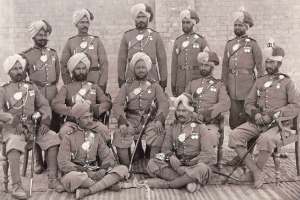 An incredible 1.4 million Indian combatants and non-combatants were recruited by the Indian National Congress to help with the war effort on behalf of Britain.

The army itself was mainly made up of Pashtun and Punjabi communities of Northern India. One third comprised of Muslim soldiers, and one fifth Sikh.

Traditionally these communities were a ‘warrior people’, and were believed by the British to be physically stronger than South Indians.

The different communities made up separate regiments in the army – and their individual food preferences such as no pork or no beef were respected. Atta was even imported to make chapattis. 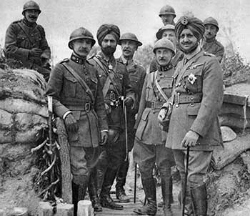 But these troops were also victim to racist attitudes of the colonial powers. Many even questioned the role of these ‘Orientals’ in the war, and why these ‘savages’ should be sent to fight opposite ‘civilised’ nations.

Despite this, the Indians felt a fierce and loyal sense of duty to their colonial rulers, the British, and they were a key component to keeping German forces at bay.

They first arrived in Marseilles on September 30, 1914. They stayed until the end of 1915 where they were then withdrawn and taken to the Middle East. In particular, they had a significant role in the First Battle of Ypres.

But trench life was far different to the colonial wars that they were used to; they were unaccustomed to the cold climate. 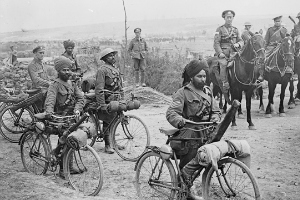 This long-distance fighting led to a heavy loss of  life – much more than any of the Western powers could have anticipated.

Dubbed as ‘faceless killings’, it removed the patriotic heroism and glory of war that many of these 19th and 20th century soldiers had been brought up with.

In total, 60,000 Indian troops lost their lives, and the injured were sent to Brighton for treatment.

Many Indians in hospital wrote letters back home to rural Punjab to share their experiences. But as many were illiterate, the army recruited clerks to scribe letters for them.

Censorship meant that soldiers were not allowed to openly express their feelings, and a lot of the time their letters were changed to appear more vague.

In letters kept by the British Library, one soldier in November 1915 wrote: “Government has made excellent arrangements for the sick and wounded. There is no trouble of any kind. We pass our days in joyful ease while government showers benefits upon us. We bless God continuously and pray for his bounty.”

Another letter unearths the racial oppression that some of the Indians felt: “Alas we are not free to go about at will. In fact we Indians are treated like prisoners. On all sides there is barbed-wire and a sentry stands at each door.

“If you ask me the truth, I can say that I have never experienced such hardship in all my life. True, we are well fed, and are given plenty of clothing but the essential thing – freedom – is denied.”

Injured Indian soldiers were kept together, and nurses who attended to them were chaperoned. There was a fear of mixing British women with these exotic Indian men, and many regulations restricted interaction between Whites and Asians.

Approximately 9,200 medals were awarded as well as a dozen Victoria Crosses, with the first VC awarded to Khudadad Khan. Despite such an extraordinary effort made by them, little is mentioned in modern history books detailing their sacrifices. 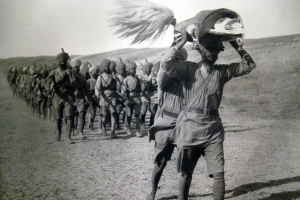 As well as the army, the Royal Indian Marine, also served in Mesopotamia and Indians also played a significant role in nursing via Queen Alexandra’s Imperial Military Nursing service (QAIMNS). They served in Flanders, the Balkans and the Middle East.

Following the aftermath of war, tensions between India and its Imperial father worsened – India had suffered great economic hardship, not only of troops but also livestock and supplies.

At this point Mahatma Gandhi stepped up famously saying: “Seek ye first the recruiting office, and everything will be added unto you.”

Yet the British were unwilling to let go of their rule and let India move towards independence, and the Indians became increasingly restless. It would be almost 30 years and another World War until they would be given the freedom they wanted.

These unsung heroes of the Indian Army were vital for the war effort. Their loyalty to the British crown ensured that the Allied forces could overcome their aggressors and their sacrifices should never be forgotten.

Aisha is an editor and a creative writer. Her passions include music, theatre, art and reading. Her motto is “Life is too short, so eat dessert first!”
Bobby Walks across India for Charity
Indian Girl cuts off Penis of Rapist