An Indian World War II Veteran named Darbara Singh Bhullar has been awarded a special veteran’s medal for his service for the Allied Forces. He was presented with the medal at an event welcoming the Indian Team to the Commonwealth Games.

An Indian World War II veteran named Darbara Singh Bhullar has been awarded a special medal by the British Army.

Bhullar served in both Burma and Singapore, and was presented with a veteran’s medal at an official event held to welcome the Indian Commonwealth Games Team to Glasgow on the evening of Monday 21st July.

This year’s Glasgow ceremony was run by the Association of Indian Organisations and the presentation was made before an audience of 350 guests, which included 200 Indian athletes and officials, and there was also a special dinner held at River Palace in Glasgow.

The Indian Army of course played a crucial role in World War II, which is only beginning to be recognised by the British Army. 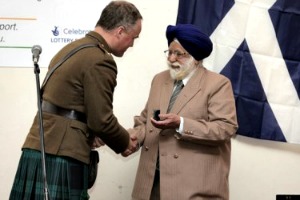 Though the British could celebrate what they called the end of World War II with VE day, there was still much fighting in Asia after this. The Japanese Army had taken most of the British Empire in the east, and had not yet surrendered.

The Indian Army was the main section of the Allied Forces which fought to drive back the Japanese Army. Though many in Britain forget the role of the Indian Army in World War II, it is remembered by those who fought.

In 2005 gates were built on Constitution Hill in the middle of London, commemorating the sacrifices of the subcontinent soldiers, and also those from Africa and the Caribbean who fought for the Allied Army, marking a step towards proper recognition for Indian veterans.

The Association of Indian Organisations is an institution which joins up all of the Indian charities and groups around Scotland.

It provides support for the members of Scotland’s Indian community and helps them with any issues which concern them. They give help with passport and visa questions, and also deal with domestic problems such as health and education.

This Association is also part of the Federation of Indian Associations in Great Britain, which was formed in 1943 and launched a campaign to highlight how the British were implicated in Bengal famine problems.

At the event on Monday 21st July presentations were also made to Amrit Paul Kaushal, former Vice-President of the Association of Indian Organisations, and Dilawar Singh Benning. Both these men received MBEs this year as a way of recognising their commitment to community cohesion in Scotland. 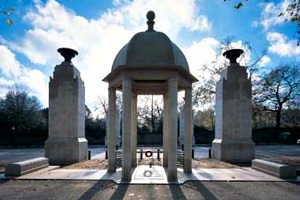 “On behalf of all the member organisations, I would like to congratulate Darbara Singh Bhullar on his presentation and extend a warm welcome to all the athletes and officials representing India at the 20th Commonwealth Games.”

As well as senior representatives from the Association of Indian Organisations and army personnel, there were guests from the Scottish government and senior dignitaries from the High Commission of India in London.

This recognition of an Indian World War II veteran is an important gesture for community cohesion in Scotland, between the Indian community and the rest of the country.

The presentation to Bhulla marks another step towards fully recognising the contribution of Indian soldiers, both collectively and on an individual basis, in World War II.

The giving of this medal as Scotland welcomes the Indian athletes to the Commonwealth Games emphasises its importance as a gesture of recognition and integration.

Eleanor is an English undergraduate, who enjoys reading, writing and anything media related. Aside from journalism, she is also passionate about music and believes in the motto: “When you love what you do, you’ll never work another day in your life.”
HS2 Railway to be built in Birmingham
Revenge Rape of Girl in rural India