Bobby Walks across India for Charity

The 79-year-old pensioner, who is Chairman of the India Association, has announced that he will walk across India. Balwant ‘Bobby’ Grewal intends to walk 2,600 miles and raise £1.5 million for charity.

Grewal begins his trek in December at Kanyakumari, at the southern most end of India.

A 79-year-old pensioner named Balwant Grewal, known to his friends as Bobby, is preparing to walk the ‘circle of India’ in a 2,600 mile trek across the country. The aim is to raise £1.5 million through this ambitious feat.

He is hoping to complete the challenge over 5 months to raise money for the charities Save the Children and the India Association, who will then distribute the money to charities in the UK and also abroad.

Grewal is in fact the Chairman of the India Association, which is a charity dedicated to raising funds for a variety of worthy causes.

He will begin his lengthy journey in December in Kanyakumari, at the southern most end of India.

Grewal will then take a route along the east coast of the country, through Chennai and Kolkata and Chandigarh, to reach New Delhi where is planning to end his trek in late April of 2015.

The pensioner, who is also a father of three children, will have to cover 25 miles every day in order to reach the milestones which he has planned throughout his journey.

In addition to the physical demands of this epic trek, Grewal will also have to contend with the difficulty of India’s terrain and the extreme heat which he will experience. 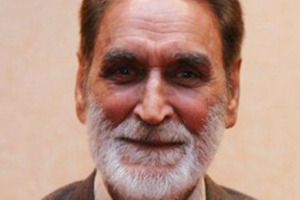 Despite the daunting prospect of this mammoth walk, Grewal is excited by the challenge:

“I feel extremely blessed. I have always enjoyed walking and will have the privilege of fulfilling my dream of walking the ‘circle of India’, whilst raising money for extremely worthy causes.

“The India Association has always considered the plight of needy children worldwide as their highest priority. Save the Children’s efforts in saving lives, realising potential and fighting for the rights of children globally aligns perfectly with the Association’s vision.”

This epic project has attracted the support and patronage of many notable personalities, including Lord Bilimoria CBE, who is the Chairman of Cobra Beer Ltd, as well as a crossbench peer in the House of Lords.

Other patrons include MPs such as Ed Miliband and the Attorney General Dominic Grieve.

In addition to these big sponsors, the renowned explorer Sir Ranuplh Fiennes OBE has offered his support, saying:

“I am delighted to offer my support to Bobby and the India Association, as a patron for Bobby’s Walk Full Circle.

“I admire Bobby’s determination to carry out such an impressive feat at the age of 79 and I appreciate just how challenging the walk will be for him, both physically and mentally.” 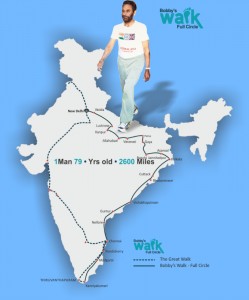 This is not the first time that Grewal has completed this incredible journey since reaching retirement age. In 2004 he walked over 2,500 miles all the way from Amritsar at the northern western point of India, down to Kanyakumari.

This meant that he trekked across 10 states in India within 5 months. In this journey, he managed to reach a figure of over £100, 000 in sponsorship and donations for Northwick Park Hospital to fund their Cancer and AIDS research units.

When Grewal completes his latest trek, in April 2015, it will mean that he has walked a complete circle of India.

To ensure he remains in good health throughout his walk, the pensioner will be accompanied by one support vehicle and a team of four people.

There will be a chef, a physiotherapist, a PR manage and a driver.

Grewal’s journey will take him through seven states in India, a massive country which is home over one billion people.

If you want to learn more about Grewal’s trek, you can visit Bobby’s Walk Blog at the India Association website here.

He will be posting updates about his training and progress across India throughout the five month walk.

Eleanor is an English undergraduate, who enjoys reading, writing and anything media related. Aside from journalism, she is also passionate about music and believes in the motto: “When you love what you do, you’ll never work another day in your life.”
Government targets Modern Slavery in Britain
The Indian Contribution to World War One