Kangana Ranaut walks all over Karan Johar like a Boss

Actress Kangana Ranaut said what no outsider in Bollywood has ever dared to say; she called Karan Johar the “flag bearer of nepotism” on his own chat show.

All hail Kangana Ranaut – Bollywood’s uncrowned queen – for she beat Karan Johar at his own game like it was nobody’s business.

It’s not every day that an actor, particularly an ‘out-of-towner’, calls out one of the most powerful filmmakers of Bollywood on TV and still sits confidently across him through the entire show. And that’s exactly what happened on the latest episode of Koffee with Karan.

Fearless and not one to mince words, Kangana went all guns blazing at the Ae Dil Hai Mushkil director leaving him in a rather uncomfortable state as well as her co-guest on the show, Saif Ali Khan.

In an industry known for its bias towards star kids (aka film royalty) and which is infamous for actors cozying up to filmmakers in order to be cast in their next film, Kangana did not shy away from calling KJo “the flag bearer of nepotism” and someone who is perhaps the leader of the movie mafia and is “intolerant to outsiders”. 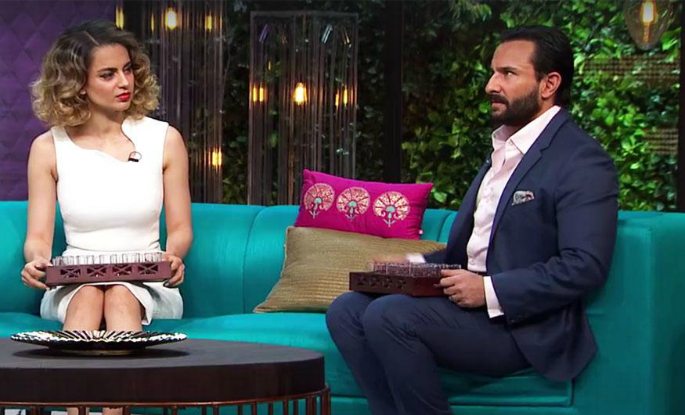 She unapologetically reminded him of how he made fun of her English on this very show and that, even though he may be a potential antagonist in her biopic, she is not the one to deter.

In fact, Kangana credited KJo for being the driving force behind her transformation as an actor; had it not been for all the rejections and blatant mocking, she wouldn’t have come this far.

From calling KJo “frivolous” to refusing to work with the Khans of Bollywood, Kangana pulled off the impossible in the diplomatic, often pretentious world of Bollywood and that, too, with a nonchalant smile on her face.

It sure takes a lot of guts to stand up to your critics and shake up the status quo given how it can adversely affect your career. But here she was, with her blonde curls, bold red lipstick and a no-nonsense attitude giving these power men one reality check after the other.

Since the episode, Kangana Ranaut has surely emerged as an inspiring woman of strength for many of her fans, if she hadn’t already. For the rest of us, our girl crush has definitely intensified.

Image courtesy of Star World and Koffee with Karan