Asian fashionistas and brides-to-be piled into London’s ExCel for a weekend of culture and clothing at India Fashion Week and National Asian Wedding Show.

BRAUN India Fashion Week and the National Asian Wedding Show took place between October 15 and 16, 2016, at the heart of London at the ExCel Exhibition centre.

The weekend began with an instant buzz as guests flooded through the entrance into the event. Being handed tote bags to collect leaflets and more throughout the day, it was sure from the start that no one would be going home empty handed.

Four catwalks were put on and every seat was taken for each. Host and special guest presenter, Anushka Arora, looked stunning in Abha Choudhary.

BRAUN India Fashion Week London is a fantastic platform that celebrates British and South Asian designers. The theme for 2016’s event was a fashion fusion between the East and West. South Asian designers were able to delicately melt the two opposing sides of the world together to create a perfect mix of styles.

The lovely collection by Bhumika & Jyoti stood out as floaty and feminine. They used a clean white and gold colour scheme for their long-length garments, whilst garnishing them with drapes of jewels and traditional style turbans. 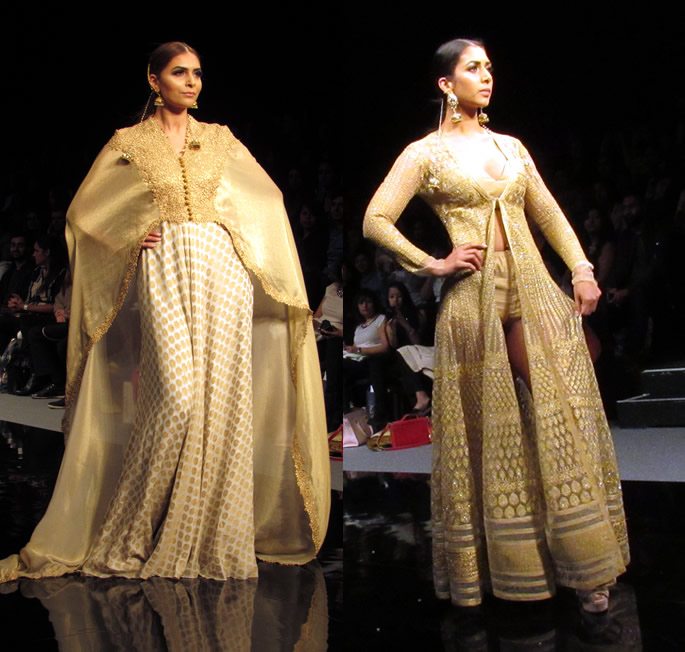 DESIblitz managed to catch up with designers, and lifelong best friends, Bhumika and Jyoti after the show. They told us that their collection ‘Mother Earth’ was “inspired by the desert… the golden textures of the sand that a lot of people don’t normally see.”

We also had a chance to speak with the lovely Seetal, designer of J’adore Adorn. Starting by creating a luxury crystal phone cases, she designed a line of headsets which are in Selfridges and Harrods. They are “necklace-style headsets that handmade with Swarovski style elements” that are Bluetooth connected to your phone to play music.

A crowd favourite was Studio AV. Again, using floaty clothes, Studio AV had a playful collection of nature inspired pieces with woodland embroidery, such as trees, birds and flowers. The cream, brown and green garments were very Tinkerbell chic!

In regards to the India Fashion Week shows as a whole, themes included darker colour schemes, draped or pleated fabrics, maxi dresses and a general look of class for the modern woman. 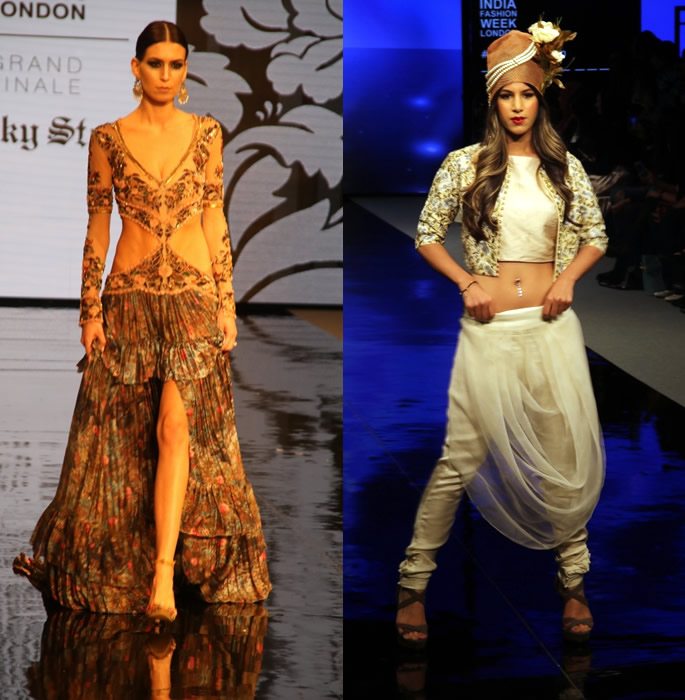 Style Rooms displayed some glamourous fishtail dresses and lenghas with emphasis on the detailed borders. Common fabrics amongst the bunch were mesh and velvet. Also, showing a westernised influence the dresses, were clearly Indian yet, used waist belts – a normal feature in British fashion.

Satin and lace were used a lot and the backs were detailed with buttons. The button-up back has been a very popular bridal trend since Kate Middleton, Duchess of Cambridge’s Alexander McQueen dress featured them in 2011.

For the National Asian Wedding Show, themes brides can look forward to seeing included A line skirts, cheeky mesh details to show a bit of skin, a lot of sparkle and waistcoat style dresses or overlays. 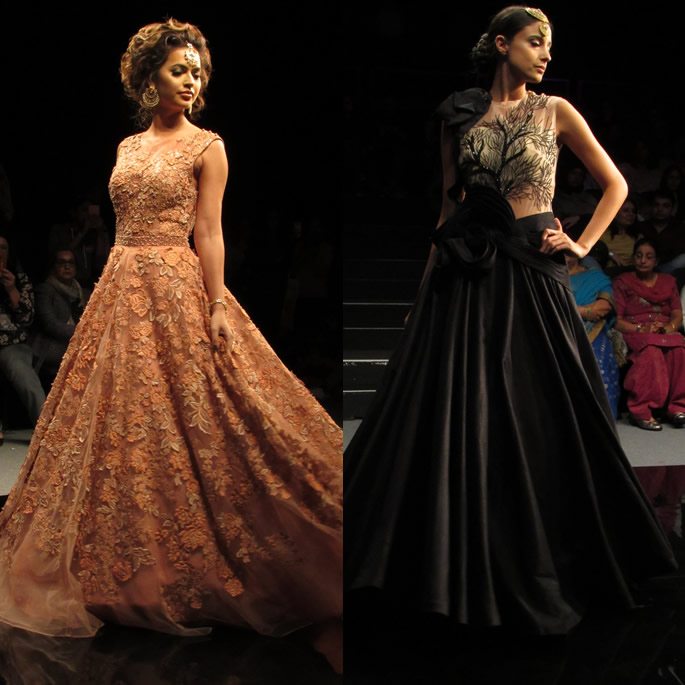 Stalls were very varied. From Asian makeup artists to event caterers, there were hundreds of places for everyone to visit. A company mobile throughout the day was Asian Wedding Mascots. Everyone was warmly welcomed for a picture with Raj and Simran, who attend and perform at any event.

Solitaire Weddings, a husband and wife run decoration company, stole the show with a massive marquee filled with their tables, centerpieces and arrangements.

Cute and quirky, The Dessert Boutique is lovingly owned and a specialist in homemade miniature desserts for all occasions. Not to forget, Chauffeur Driven who bought along a Ferrari and a Lamborghini to entice potential customers.

A standout stall included that of Official Charity Partner, the British Asian Trust, whose current campaign is the #giveagirlafuture appeal. Guests were highly encouraged to donate just £5 and be entered into a raffle for some amazing prizes.

India Fashion Week official sponsor BRAUN were hosting a competition to win some of their luxury products. 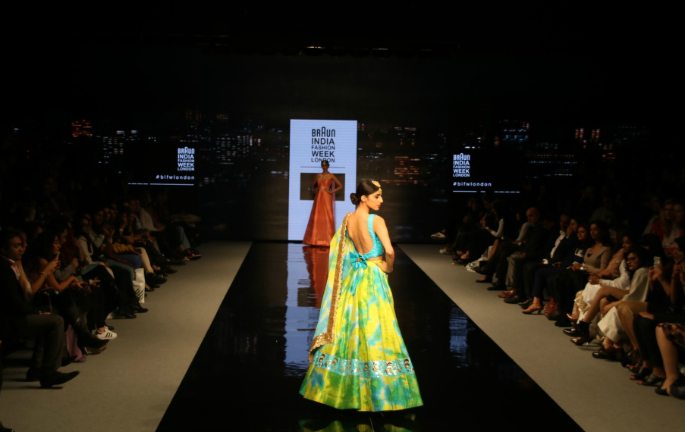 Guests enjoyed the event mostly because of “the amazing catwalk shows” and happy that there were “so many to go to.”

Also, crowd favourites were Krazy Memories as they were giving out popcorn and allowed visitors to use their photo booth, fun props and even take a picture home for free!

Overall, the event was absolutely spectacular. The designers did not fail to impress an eager audience, the stalls were manned by cheerful and helpful staff and the whole show ran very smoothly.

Thanks to the freebies, competitions and handfuls of leaflets, guests left with huge smiles.

DESIblitz are already looking forward to next year’s event!