Bangalore Fashion Week 2016 took centre stage from the 4th-7th February, and unveiled some spell bounding collections. DESIblitz has the highlights.

The 14th edition of Bangalore Fashion Week took place between February 4 and 7, 2016, and presented an array of talented designers and collections.

The Sheraton Grand Bangalore Hotel was centre stage for a variety of celebrities and fashionistas, who showcased an eclectic abundance of gorgeous designs, from the bizarrely brilliant, to the stylishly chic.

The weekend extravaganza set the bar for upcoming fashion shows this year, and most definitely lived up to its much anticipated hype.

DESIblitz brings you the highlights of the entire expedition, shortlisting the best collections that were presented from the 46 designers. 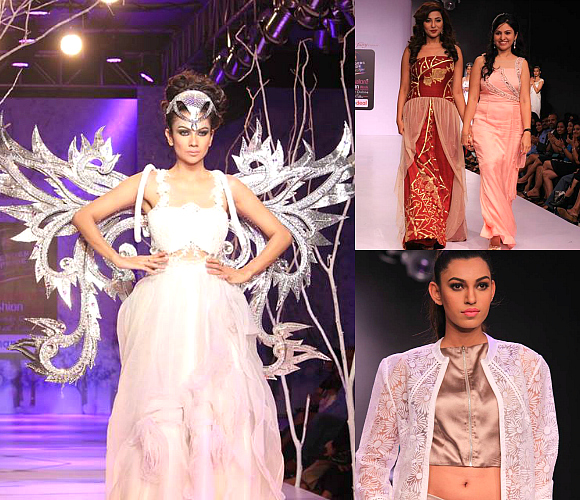 The first day of Bangalore Fashion Week saw designers such as Michelle Salins and Ramesh Dembla send models down the catwalk in exquisite ensembles.

The showcase even saw actress, Parvathy Nair turn showstopper for her final design, which was rich in colour, threading, and embroidery.

Oxolloxo was also another eye catching segment on day one.

Simple, sophisticated outfits redefined fashion through its collection, which saw hints of a slightly Westernised style.

Blazers, jumpsuits, and mini dresses were vivid in geometric, floral and linear prints which offered a truly encapsulating sight.

But perhaps the highlight of the day came from ace designer Mr Ramesh Dembla, who unveiled a truly enchanting collection.

In what seemed to follow a fairy tale premise, each piece was futuristically grand.

From elaborately designed head pieces to angel wings, and even body armour, it was everything we could have wished for and more.

A silver colour palette dominated the entirety of the show, which was also draped with mystical branches either side of the catwalk.

Many designs had voluminised layerings on the skirts, which created stunningly striking silhouettes. 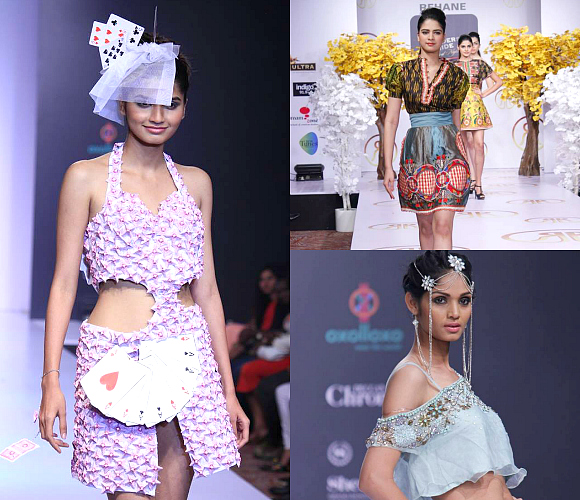 As well as traditional attire, we were presented with an array of abstract, cut out attires.

Feathered skirts, playing cards, and even world maps were incorporated into the collection, which truly enticed onlookers with curiosity.

Amidst the artistically enthusiastic designs were modest, sophisticated ensembles.

Soft mint colours prevailed throughout their presentation, with the occasional royal blue making an appearance.

This collection was entirely for the modern day woman. Sheer net materials sashayed over a selection of tops, creating a hint of sensuality within specific outfits.

Heavy embroidery was a defining factor of the collection, which in turn constructed a look of grandiosity and elaboracy.

Rehane also put together an elegantly vibrant array of designs, presenting a compilation of prints and silhouettes. 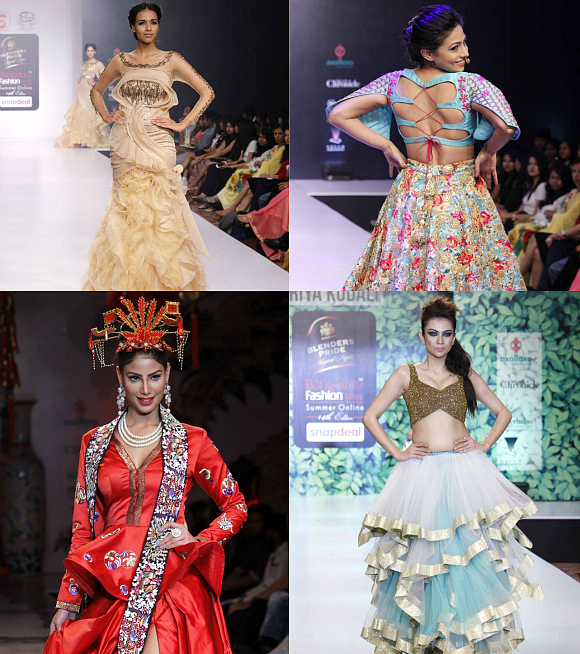 Indian embroidery was fused together with Western patterns on a variety of materials.

The collection was an amalgamation of glamour, grandeur, and sophistication, which dazzled fans and fashionistas alike.

Bijay Gupta then presented his creations which were inspired by French Arabic culture.

Pastel colours prevailed throughout, which only heightened the beauty of the swarovski crystals and pearls that were embellished onto each drape and cut.

A definite defining moment of the entire weekend was Ashok R Maanay’s collection.

Stunning headpieces, intricately designed borders, and beautifully created lehengas appeared one after the other, and made this collection one to beat.

Layering and texturising was a key feature for Riya Kodali, who showcased a dreamy collection of ensembles.

With dresses hand crafted by Indian artisans, the embroidery was maximally perfect, with sparkle and glamour pouring from every design.

One avatar which caught our eye was the blue and gold ruffled skirt. The blend of white and sea blue formed a perfect fusion of light and dark, which was beautifully met with a golden border. 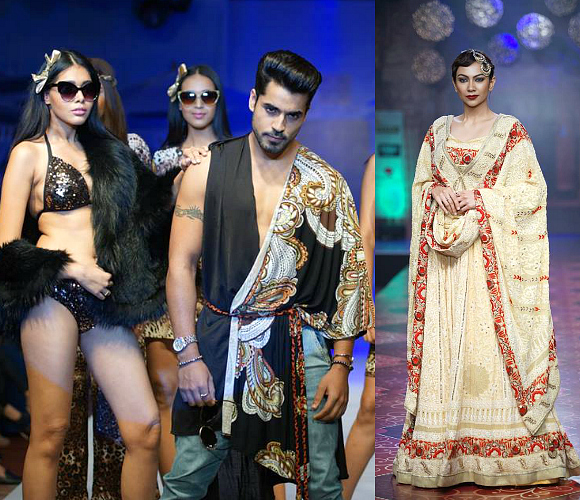 The final day of the extravaganza saw a show stopping appearance of the gorgeous Gautam Gulati who strutted his stuff for designer, Pria Kataria Puri.

Draped in a printed cut out creation, the actor gave his best walk alongside supermodel Waluscha De Sousa.

The two completely rocked Pria’s designs, which leaned towards a rural, animalistic theme.

Aanchal Jaggi released an array of stunningly chic ensembles which were rich in colour and detailing.

Her finale piece was perhaps her most dazzling, with gorgeous golden prints enthralling the outfit from head to toe.

From one gorgeous collection to another leads us on to Faconner, by Arshi Jamal.

Ranging from creams, white, pinks, and reds, each design varied in style, yet maintained the ever present grandeur which Arshi so desired to portray.

It had it all, from elaborate, westernised designs, to traditionally chic lehengas.

With so much selection, this may have been the best Bangalore Fashion Week we have seen to date.