From India to UK and from Handsworth to Bollywood, Hip Hop and Bollywood artist, Hard Kaur has had a musical journey laced with hardships, challenges and above all, success. DESIblitz got close to the ‘Supa Woman’ to find out more about her.

Hard Kaur is a Bollywood artist known for her Hip Hop and Rap music influences on popular Bollywood tracks and songs of her own. She has stuck to her guns through many life challenges to achieve the success that has come her way in recent years, especially, her recognition by Bollywood.

Born as Taran Kaur Dhillon in 1979, in Kanpur, Uttar Pradesh, India; she lost her father in the 1984 anti-Sikh riots when she was the tender age of five.

At the time, her mother ran a small beauty parlour in their house which was burnt down by the unrest, forcing them to move to Ludhiana to their grandparents home. Her brother, mother and her lived there until 1991 when they left India for a new life in the UK.

Her mother re-married and the family moved to Handsworth in Birmingham, UK. This is where her mother worked on continuing her beauty and business skills and opened a beauty salon. The new marriage did not turn out well, her mother was physically abused by her step father and subsequently, it meant her mother becoming a single parent to provide support for both children.

A strong reason why Hard Kaur feels her mother is the ‘real’ Hard Kaur.

Hard Kaur attended school and with influences of different cultures around her began to developing interest in Hip Hop and Rap music. However, she was bullied at school and often called a ‘freshie’ and told to go back to India. With her big love and talent for dancing, she impressed many of her black school friends and won her popularity amongst them. 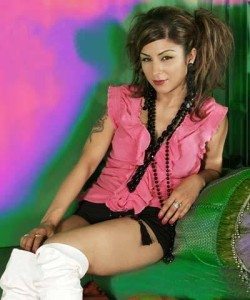 With an appetite to perform, Hard Kaur attended many studio complexes in Birmingham, including Mick St. Clair studios, where she was regularly spotted wanting to engage in the British Asian music scene which at the time was primarily male dominated and biased towards Bhangra music.

Many did not understand her passion for dance and music which led her not to be taken seriously and especially, being Indian and female; it meant she was labelled as a ‘nachan wali’ (dancing girl) a term usually given to courtesans. 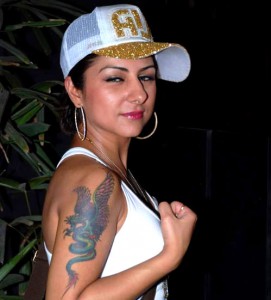 Determined to carry on despite the negativity, Hard Kaur developed an outwardly tough persona which had a ‘Desi’ street vibe, and she actively pursued her dream and passion for Hip Hop.

She worked with many artists including Punjabi MC who named her ‘Hard Kaur,’ performed at Glastonbury and was the opening act for a Justin Timberlake concert in the UK.

Her first break came in 1995 when she did the track ‘Ek Glassy’ with the Sona Family. The song was a huge hit globally, especially in India, and gave recognition to this Birmingham based Indian female artist.

The song led to performances in India, and in 2007, Bollywood music directors Shankar Ehsaan and Loy approached her to work with them to record her first Bollywood song, the big hit, ‘Move Your Body’ for the Sriram Raghavan’s Bollywood movie Johnny Gaddaar.

Remembering the time she said, ‘it was like winning the lottery,’ to have your first song recorded with such great music producers who gave her creative freedom too. Other Bollywood producers she’s worked with include Pritam and Anu Malik.

As well as having her own label, Hard Kaur got an offer from the Indian record label Saregama which fitted her musical freedom, and she recorded her debut album ‘Supa Woman’ which was released in 2007. The album had ten tracks which Hard Kaur wrote and performed, including the hit songs, Bombay Deewana, Sexy Boy and My Girls. The album musically defined what Hard Kaur grew up listening to and the songs reflected what she is about.

DESIblitz.com met up with Hard Kaur and talked to her about her music, life and success, including some cheeky questions which she had no problem answering! Watch the exclusive SpotLight interview to find out what she told us.

Hard Kaur’s love for Hip Hop gives her a special platform as a woman and an Indian female artist, giving her the control as she likes. She feels her music gives her the freedom to express herself,

“I want to do something that gives me the power to say whatever I want to say.” 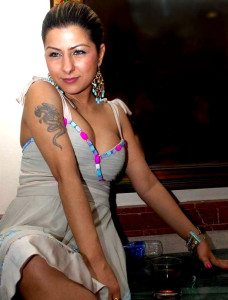 She knows not everyone may like her music and says, “You can’t expect everyone to like you because everyone has different tastes but I got a lot of love from the public.” But she does not feel that same way about the industry, especially, in the UK where she feels there are still ego problems and lack of direction, which is hindering success.

As well as performing on tracks, Hard Kaur has opted to do some acting in Bollywood too. Her debut appearance in Patiala House, features her with Akshay Kumar, Rishi Kapoor and Dimple Kapadia, mainly shot in the UK. 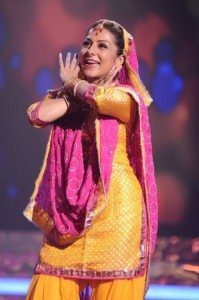 Away from Bollywood, Hard Kaur has collaborated with Eminem’s group D12 from Detroit with whom she has recorded a single called ‘Desi Dance’ (August 2010).

Hard Kaur also made it to the semi-final rounds of the Indian television dance reality show Jhalak Dikhhla Jaa (Season 3) and has featured on many magazines and appeared on numerous music shows including co-hosting ‘IPL Rockstar’, a music reality show on the Colours TV channel.

This vibrant, loud and street aware woman has shown that with determination, passion and a relentless appetite to fulfil a dream anything is possible against all the odds. With a strong commitment to her roots and what she represents, she says, “I’ve done it my way and I’m glad I didn’t give up being who I am”

Hard Kaur has used her life experiences as the underlying strength to her ‘hard’ image, however, simply she is a woman on a mission to prove that she has got what it takes to be an ambitious performer with a unique talent.

Check out the photo gallery of Hard Kaur in her many guises.

DESIblitz wishes Hard Kaur all the best with her career and hope she aspires to realise her dreams.