A City Summer Jam is taking place at the Mustik nightclub in London in memory of Anjool Malde. The night will feature many popular names from the British Asian music scene known to Anjool. DESIblitz spoke to the organisers and performers about this special gig.

"He will always be fondly remembered by us"

It was a year ago that Anjool Malde, 24, jumped to his death from the eighth floor of Coq D’argent an upmarket restaurant in the square mile. The Oxford Graduate was a promising young stock broker at Deutschebank with his whole life ahead of him when he committed suicide.

Dressed in his best Hugo Boss suit Anjool ordered a glass of the best champagne at the restaurant before falling to his death from the rooftop. It was just two days before his birthday.

One year on The Anjool Malde Memorial Trust have organised the City Summer Jam to celebrate the life of the Oxford graduate. The club night has an all star line up bringing together the biggest talents in the Asian music scene.

Rishi Rich, the biggest name in the Asian music scene, talked to DESIblitz about performing at the jam, “It is an honour to be asked to attend the Summer City Jam for the Anjool Malde Memorial Trust as it was Anjool himself that introduced Rishi Rich productions and Mumbai Rouge to our partner Tiffin Beats Records. He will always be fondly remembered by us.”

DESIblitz gained exclusive access to the event organisers, Bhavesh Patel, a close friend of Anjool Malde and one of the organisers of Summer City Jam. 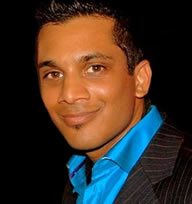 Bhavesh told us, “We have the music industry’s biggest names showing off their talent on the evening, so if you did not know Jools come down to soak up what promises to be an electric atmosphere. For those who did know Jools, to celebrate a young bright spirit who, according to the many, many tributes that flowed in on the news of his loss, inspired so many friends, even strangers, and helped them on their way to bright careers and entrepreneurial success, using no more than a helpful word, a brokered deal or a timely connection. He always found time for others even when he lived the fast lane himself and while always ready to help, he asked for nothing in return.”

Bhavesh told us about the important work the Anjool Malde Trust hopes to do,

“[The Trust] rewards and inspires talent exactly along the lines of Jools’ own spirit and philosophy.”

Bhavesh added, “He was always itching to stretch the boundaries, to tweak the status quo, to egg people on to go the extra mile, to appreciate the talent they had and the big things they could do with it if only they set their sights high. The enduring testimony to how a life should be led regardless of its span. Full, fast and fulfilling. An inspiring legacy. A focal point for his friends – particularly his family for whom he was their only son and meant more to them than anything or anybody – to help them keep his memory and legacy alive in a positive, celebratory way. The Trust will hopefully build on his special inspirational quality and scale new heights.”

The Anjool Malde Memorial Trust was set up to promote qualities which were important to the 24 year old stock broker. As an undergraduate he played a full part in life at Oxford, editing the Oxford student paper and taking part in the Oxford Union and Oxford Entrepreneurs. He was also a presenter for BBC Radio Oxford interviewing stars like Geri Halliwell and Pharrell Williams.

After graduating Anjool set up the Alpha Parties, a social events company for young professionals. He organised parties at the trendiest venues and nightclubs across London. His involvement with Alpha Parties made him a popular man at Oxford and the centre of Oxford student and graduate life. 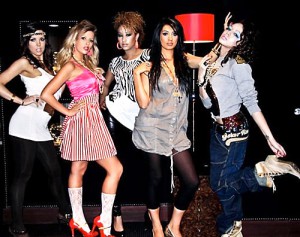 The Madam Project (TMP), latest girl band to hit the mainstream charts, will be performing an exclusive version of their song Hallelujah, written especially for the event, in memory of Anjool.

Anjlee Desai, the only Asian member from the girl band TMP, told DESIblitz, “It’s a complete honour to be asked to perform at this event. Anjool was a good friend of mine and supported me in my music from day one. I will be performing 2 numbers one of which was one of Anjool’s favourites ”hallelujah”.”

We asked Anjlee what the plans are for TMP, she said, “The Madame Project have a showcase performance on the same night where all 5 of us will perform together. However, the girls and I decided as the launch for Anjool Malde Memorial Trust personally meant so much to me, that it be best I performed without them. However, the girls will be there to support the cause.” 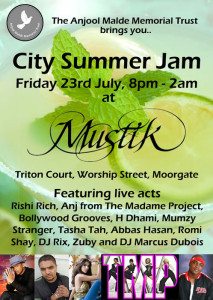 Anjlee added, “I think the Anjool Malde Memorial Trust is a wonderful idea. And a great way of making Anjools memory live on. The trust has been set up to inspire people and new projects. Just as anjool did himself. Anjool supported me with everything I did and was an inspiration to me and so many others and his memory will continue doing so for many years to come thanks to the AMT. He is deeply missed.”

The Summer City Jam is on Friday, 23rd July from 8 pm till late at the Mustik Bar, Triton Court, Worship Street, Moorgate, London, EC2A 1BR. By going to this unique event you will be supporting a worthy cause, in return for an evening of energetic music and entertainment.

S Basu wants to explore the place of Indian diaspora in a globalised world in her journalism. She likes being a part of contemporary British Asian culture and celebrates the recent flourishing of interest in it. She has a passion for Bollywood, Art and all things Indian.
Usher and Dido next for AR Rahman
Hard Kaur