Well known actress and presenter on the singing reality show, India’s Raw Star, Gauhar Khan was slapped by an audience member during the shooting of the show’s finale.

On Sunday 30th November 2014, well known TV personality Gauhar Khan, was shooting for the grand finale of the popular singing competition India’s Raw Star at Filmcity in Mumbai when she was slapped by an audience member for wearing revealing clothes.

Khan is a prominent model and actress with notable appearances in Rocket Singh: Salesman of the Year (2009), she is also a winner of the Indian Bigg Boss 7 show in 2013, the equivalent to the UK’s Big Brother.

Her attacker, Mohammed Akil Malik 24, openly shared his motive for the slap.

He said that he was offended by the model’s cutaway outfit and used this as an explanation and justification for his threatening behaviour on the show.

Malik was immediately overpowered by the quickly deployed security guards before more attacks on Khan could occur, after which the police were notified.

The Aarey Colony policy confirmed his explanation for the slap: “Being a Muslim woman, she should not have worn such a short dress.” 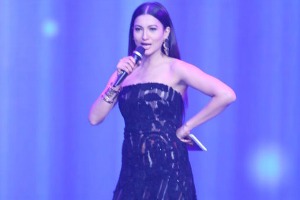 Malik was arrested and charged with molestation under Section 354 of the Indian Penal Code and is expected to appear in Borivali Court on December 1st 2014.

Speaking to The Hindustan Times, a police official shed more light on the events that occurred in the run up to the attack on stage:

“A preliminary probe has revealed that someone from the audience started teasing Khan to which she protested. An argument ensued between Gauhar and the man who was teasing her. Things turned ugly when the man suddenly slapped the actor.”

Reports say, the actress was shocked and in tears: “A stunned Gauhar didn’t understand what happened.

“Though the shooting was stopped, Gauhar took a break of an hour to gather her bearings and then reported back on stage to finish the leftover one hour shoot.”

Such a public display of anger towards women is sadly not an uncommon phenomenon in India. The country has been struggling with issues of gender equality for some time. Gauhar Khan can be seen as a representation of the new generation of the Indian woman.

A woman who is challenging traditional socio-cultural boundaries by being financially self-reliant, independent and a woman who asserts her own choice (in this case through her choice of dress).

Malik’s actions of assault, may be an example of some Indian men who use aggressive dominance to counter the power shift of these newly emancipated women. 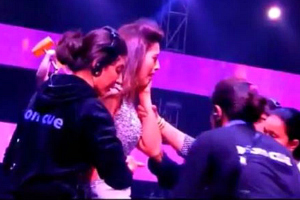 Following the horrific Delhi bus gang rape in December 2012, Narendra Modi has said the protection of women was of paramount concern and stressed that women deserved respect and dignity.

Positive changes are happening in India to help women. Currently, there are  five exclusive fast track courts set up to deal with cases purely of sexual violence against women.

The Parliament passed the Criminal Law (Amendment) Act 2013 which amends the Indian Penal Code, Indian Evidence Act and the Code of Criminal Procedure.

The Sexual Harassment of Women at Workplace (Prohibition, Prevention and Redressal) Act 2013 was also passed.

But while the law is changing, perhaps another approach is to tackle the mindset of people themselves.

Can we help spark a cultural change which bridges the gender gap and helps prevent attacks similar to Gauhar Khan’s in the future?

Natasha is an English Literature and History graduate. Her hobbies are singing and dancing. Her interests lie in the cultural experiences of British Asian women. Her motto is: "A good head and a good heart are always a formidable combination," Nelson Mandela.
Ungli ~ Review
Neeru Bajwa plays double in Proper Patola