Offending people in India is becoming easier than ever. DESIblitz investigates just how appetising AIB Knockout is to different Indian audiences.

Insult comedy is too new and perhaps far too raw for the cultural shakaharis of India.

But AIB Knockout seems to be having some major problems with those who like it ‘well-done’. Very well done.

For the newbies, AIB or All India Bakchod is a popular Indian comedy troupe. They are most widely known for their YouTube spoofs on Indian Politics and Bollywood.

Recently, in late December 2014, AIB hosted the Knockout Roast in Mumbai. It marked the glamorous entry of ‘insult comedy’ and roasting into India, especially Bollywood. 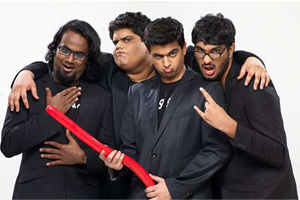 This genre thrives on people’s ability to ‘take-a-joke’ on themselves. Ironically, the intent of a roast is to honour the ‘roasted’.

Either because of its newness or an inherent cultural incompatibility, the Knockout is being busted. Badly.

Their films will not be released in Maharashtra until the show is probed on grounds of profanity, obscenity and immorality.

Salman Khan is miffed by jokes made on the Knockout about his sister, Arpita Khan. Anil Kapoor is upset that his own relatives present at the roast laughed heartily at jokes about him instead of reprimanding the comedian.

While the celebrities are disgruntled with each other, actors, Sonakshi Sinha and Deepika Padukone have been called ‘hypocrites’ on Twitter for laughing out loud when insulted at the roast. 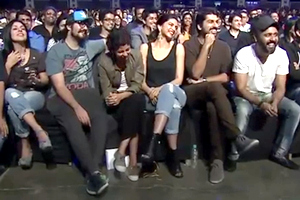 Many of this relates to the latter actor’s outrage at the Times of India Chennai Express photograph incident.

Himanshu Prashar tweeted: “#AIBNationalShame #DeepikaPadukone was seemingly enjoying the obscenity. Now we know her rant against TOI was just a publicity stunt.”

The actors also responded on Twitter. Sonakshi (@sonakshisinha) tweeted: “So nice to see twitter is filled with such angels who point out hypocrisy n never use foul language n have nvr laughed at dirty jokes (haw).”

Several FIRs have been filed against director and producer Karan Johar, actors Arjun Kapoor, Ranveer Singh and Deepika Padukone and 11 others.

The complaints were lodged by Akhilesh Tiwari, president of Brahman Ekta Seva Sanstha on grounds of ‘filthy and abusive language’, a CID inspector on the grounds of obscene behaviour, etc.

WARNING: The video below contains Adult language and is not suitable for minors.

The Maharashtra Navnirman Sena have demanded an ‘unconditional apology’ from the trio KJo, Arjun and Ranveer. Failing which, their films will be banned:

“We will not let any film featuring the actors present at the AIB comedy show to be released in Mumbai, until they apologise for their actions,” remarked Ameya Khopkar, president of Maharashtra Navnirman Chitrapat Sena.

Following the ban, the urban populace of India have been divided into those who are for this new age comedy and those against it.

Surprisingly, the AIB Knockout is not India’s first roast. Aaisi Taisi Democracy was held in Delhi in summer 2014 by stand-up comedians Varun Grover, Sanjay Rajoura and Indian Ocean singer, Rahul Ram. It was more of a political roast rather than a Bollywood one which spared it the trouble.

Its supporters have come back with, ‘if you don’t like it, don’t watch it’, implying a ‘freedom of choice versus freedom of expression logic’ to antagonists.

They also cite the 4o Lakh rupees charity AIB Knockout has generated. On the other hand, the antagonist are playing the ‘culture-is-at-stake’ card.

After reaching more than 4 million hits on YouTube in just 4 days, the AIB team pulled down the videos on February 3, 2015.

Do you think is wrong? Are people taking comedy too seriously? Or has AIB Knockout really crossed some sensitive lines?

Before we form opinions, let us have a look at what the troupe have to say for themselves. It’s only fair.

Whether the knockout was too sexual, obscene or ‘filthy’ is a different question. But it is clear that only adults who paid for it were allowed to watch it. In fact, the YouTube videos came with clear disclaimers with several age and content warnings. The show itself was classed ‘A’ and so were the resulting videos. That way, the team is not wrong.

But as for India, whether it is for consenting adults only or not – there is bound to be some backlash if it is not ‘Indian culture compliant’. That, ladies and gentlemen, is undefined territory.

The fact of the matter is, insult comedy is too new and perhaps far too raw for the cultural shakaharis of India.

If the government and local cultural intermediaries decide to step in and regulate such not-so-serious material, what happens to the non-vegetarians in India? Must they stay hungry… or turn vegetarians?

In a democracy as diverse as India, how do we please everyone? And if that is not possible, how do we not offend anyone?

Or do we, like the Indian constitution, impose reasonable restrictions on the absolute right to offend and be offended as we do to absolute freedom of speech?

The time has come to think or rather unthink what India really is. Where is the line? Or should there be one at all?

Simon is a Communication, English and Psychology graduate, currently a Masters student at BCU. He is a left-brain person and enjoys anything artsy. At his best when asked to do something new, you’ll find him dwell on “Doing is living!”
Deepika Padukone speaks about battle with Depression
Is Valentine’s Day a taboo in India?