Roast chicken is a very popular dish in the UK. We show you how to bring it to life with Desi style roast chicken recipes.

When cooked, it gives off amazing aromas and the taste is even better.

The roast dinner is a traditional British main meal usually eaten on a Sunday. But for Desi people, it can be any day!

Chicken is one of the most popular meats eaten in Britain. It accounts for half the meat eaten in the UK and is very popular amongst the South Asian communities.

Roast chicken is not an obvious choice when it comes to Desi households due to the popularity of making it traditionally as tandoori chicken, chicken tikka and of course, as a chicken curry.

In addition, often deemed as ‘bland’ (if you remember the Goodness Gracious Me sketch), which means cooking it in its traditional British way would leave some Desi palates in dire need of some spices.

So, why not cook roast chicken Desi style is what we say!

Turn this popular Sunday meal into a spice haven with the centrepiece bird ladened with flavours to rock any Desi household.

The spices are added to make the roast chicken come to life with a mouth-watering Desi flavour.

To show you how, here are some amazing recipes to make Desi style roast chicken. 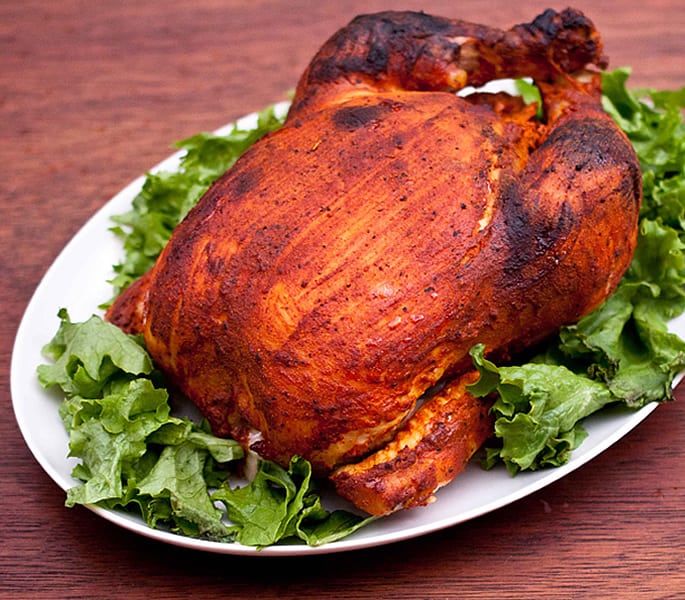 This recipe has a number of ingredients not usually seen in the preparation of a traditional roast chicken.

It also has an alternate gravy to accompany the meat to really bring out the intense tandoori flavours.

It mixes the strong spice of the chillies with the slight citrus taste of lemon in the marinade.

To really bring out the flavours, it is recommended to marinate the chicken 24 hours before cooking it.

At only one hour 45 minutes, it is a recipe which does not take long to make.

Inspired by the recipe at BBC Good Food. 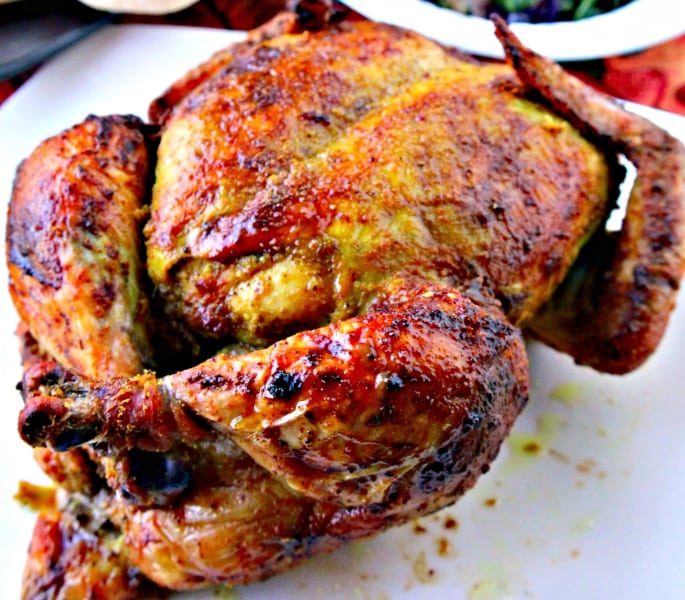 This spicy, juicy recipe is a great main dish for any table.

The method looks difficult but isn’t. It uses ingredients which will likely be on your kitchen shelf.

When cooked, it gives off amazing aromas and the taste is even better.

It will become a huge favourite among family members once they have tried this masala roast chicken.

Inspired by the recipe at My Food Story. 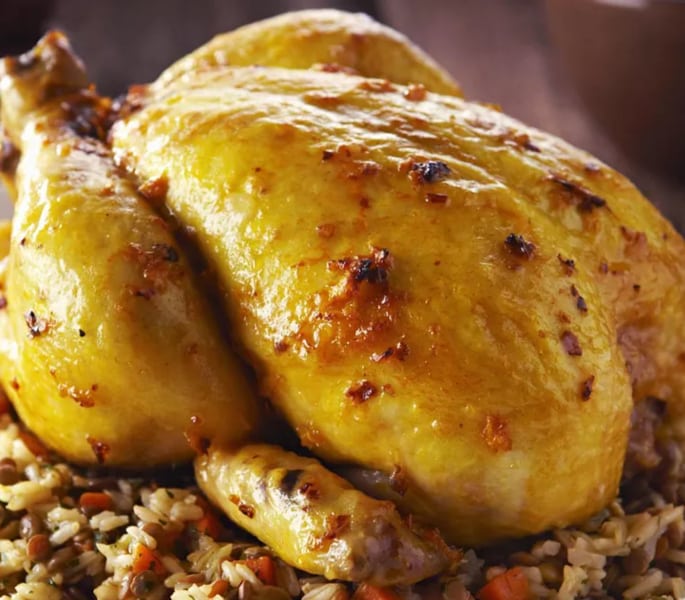 This style of roast chicken takes elements from both Western and Desi cuisine.

Stuffing a chicken is typically a Western tradition when it comes to roast dinners but this particular one combines a multitude of flavours.

It is a roast dinner which doesn’t need to be paired with roast potatoes and vegetables.

Instead, it can be served on a bed of whatever type of rice you like.

One thing to consider is that it does take a few hours to prepare and cook, but the wait will be worth it.

Inspired by the recipe at Spruce Eats. 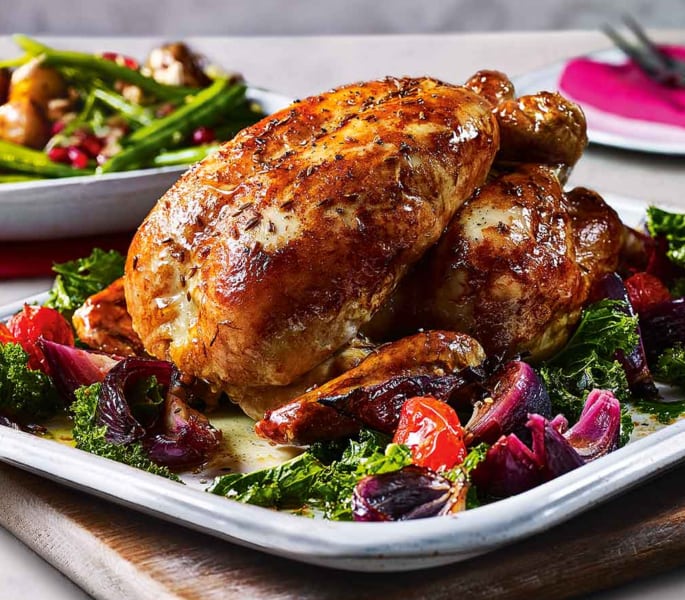 This chicken recipe uses simple ingredients for the marinade.

On their own, they are nothing special but when combined, they pack a punch.

When used as a marinade for chicken, the end result is a juicy, tender and flavourful centrepiece fit for a roast dinner.

This too can either be served with mixed vegetables and potatoes or with a salad and naan bread for a fresh take on a roast chicken meal.

It also does not take too long to prepare, so you will be enjoying the succulent flavours of the chicken in no time.

Inspired by the recipe at Simply Delicious. 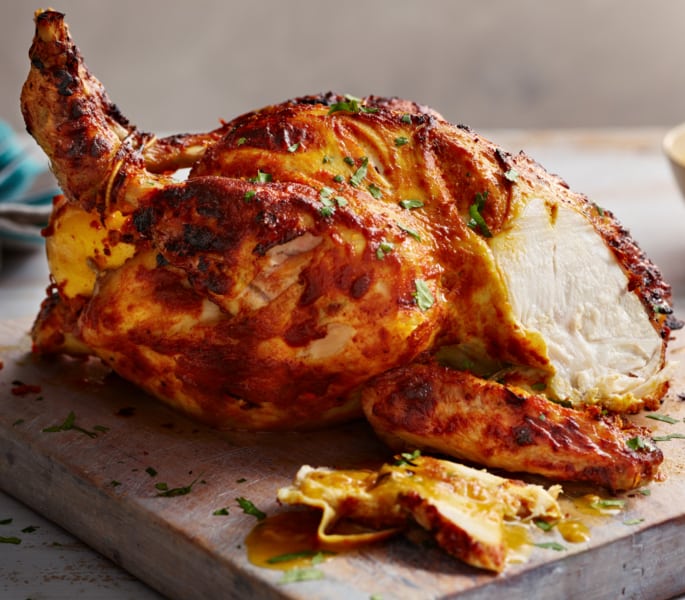 This is a roast chicken with a twist. As well as making the chicken flavourful, it also shows that yoghurt can be used in more ways.

The marinade is simple, yet spicy as it uses ingredients which are usually found in your cupboard.

It is also very healthy as it is only 653 calories and has only had 7.6 grams of saturated fat.

The recipe may use a lot of chillies, but the heat is mellowed with the cooling yoghurt.

Inspired by the recipe at Olive Magazine. 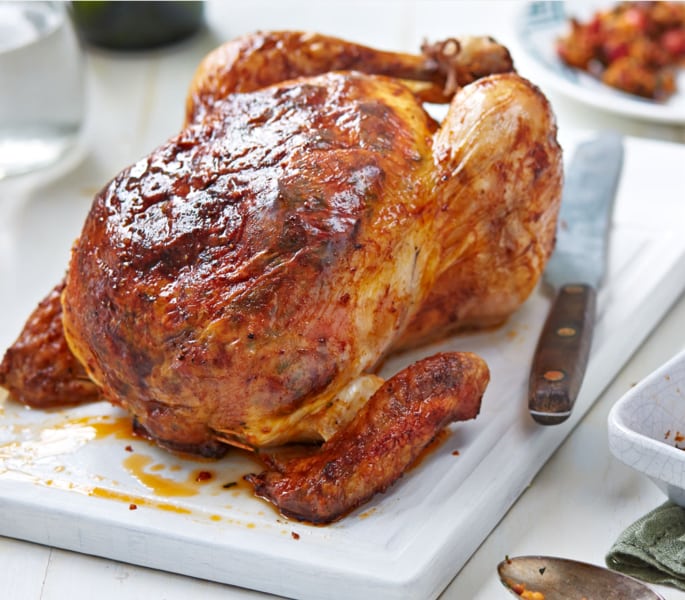 The balti is a well-known curry dish originating from Sparkhill, Birmingham. Through time its popularity swept across the UK and also made its way to cook-in sauces using the balti ingredients.

This recipe makes use of the Patak’s Balti Spice paste available from good supermarkets. You can use another balti paste instead too, suited to your preference.

With the use of the paste and other key ingredients, this roast chicken recipe boasts a ton of flavour

The recipe takes one hour and 45 minutes, therefore, making sure it combines the flavours of spice and sweetness within the tender chicken.

What is great about this recipe is that there is a Desi-style gravy to go alongside it.

Inspired by the recipe at Pataks. 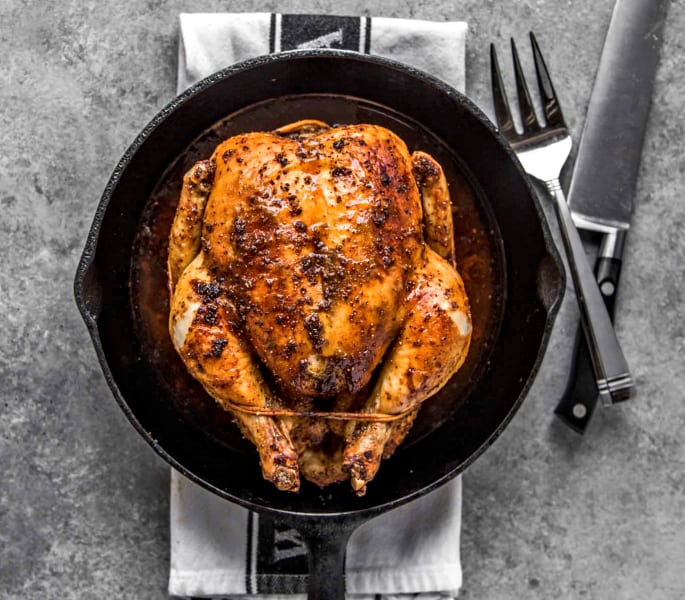 This great Indian take on a British classic is marinated in a spicy yoghurt to give a cooling aftertaste to the initial spice.

Once cooked, the chicken is incredibly tender.

At only 90 minutes, it doesn’t take long before you can experience the wonderful chicken.

As well as the chicken, whatever vegetables you like can be cooked in the same roasting tray, making it a simple recipe to master.

Inspired by the recipe by Donal Skehan.

These are just a sample of roast chicken recipes filled with a combination of spices, typically seen in many Desi foods.

Desi style roast chicken is simple to make with these step-by-step guides and promises to make your roasts all the more delicious and tasty.