Is Valentine’s Day a taboo in India?

Valentine’s Day is at the heart of a cultural war in India between the modernisers and the traditionalists. DESIblitz reports.

The celebration of Valentine’s Day is increasingly popular in India, especially in the metropolitan cities which are experiencing rapid cultural change.

Freer from the constraints of rural feudalism, there has been a breakdown of traditional mores and societal structures.

The cities are witnessing greater female mobility, a freer media which is broadcasting more sexual imagery in films and TV adverts, a decline of arranged marriages, and a rise in premarital sex.

However, India is still a socially conservative society, where people are uneasy about public displays of affection, and where a kiss can land you in jail. 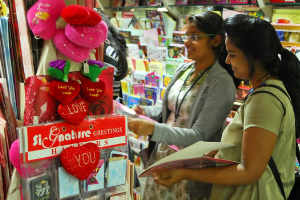 You can be arrested for ‘obscenity’ under the Penal Code 294 (a), with a maximum sentence of three months.

In September 2008, a married couple were arrested for doing just that, only for the Delhi High Court to throw the case out six months later.

India is a country where riots started in many cities and effigies were burned, after Richard Gere planted kisses on Shilpa Shetty at an Aids awareness rally in Delhi in 2007.

Concerned at the pace of cultural change that globalisation is bringing to India, many view Valentine’s Day as a form of cultural imperialism, and the very antithesis of Indian culture.

For some, private feelings of concern and indignation are not enough, and they feel the need to make their views public, or enforce them upon others. 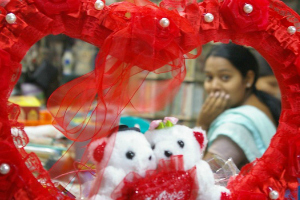 Parts of India have witnessed rallies against Valentine’s Day, and moral policing by the state or by self-appointed groups.

In 2010, Maharashtra state police were reported to be targeting Valentine’s Day celebrations.

In 2015, the Hindu Mahasabha has taken on the mantle of moral guardian and promised to forcefully marry those celebrating Valentine’s Day as a punishment.

Hindu Mahasabha National President, Chandra Prakash Kaushik, said: “We are not against love, but if a couple is in love then they must get married. We will also inform their parents.”

And that is not all. In addition, Mr Kaushik said that there are eight social media teams monitoring the internet for Valentine’s messages.

Rather than being intimidated, most have found it hilarious. The following tweet is a typical example of how the Hindu Mahasabha has been mocked on social media:

Soo..I LOVE U @LeoDiCaprio @Avi_Kaplan #BradleyCooper THERE I said it #HinduMahasabha PLZ get me married to one of them… #excited

In the past, one novel way in which Indian youth have combated moral policing was to engage in a mass-kissing campaign.

Starting in Kerala, the Kiss of Love protest movement swept across India, in the final months of 2014.

The kissing fest criss-crossed the country, to Mumbai, Hyderabad, Delhi, and Kolkata, and its facebook group received well over 120,000 likes. 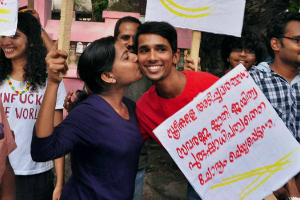 Rahul Pasupalan, co-creator of the Kiss of Love movement’s facebook page said: “We wanted to show how humans express their love. A kiss is a short and sweet expression.”

A photo of Mr Pasupalan kissing his wife in the back of police van after having been detained, went viral on social media.

Many of those against Valentine’s Day might feel threatened by the changing role of women in society.

Sameera Khan, a writer and commentator on gender in India said:

“It’s when women want to access public space for pleasure, to wander around, sit on a park bench and read, or hang out with a boyfriend, or as we say, to loiter, that is when Indian society is not okay with it.”

Furthermore, there is still huge resistance to sex being spoken about and dealt with openly. There could be a myriad of reasons for this. One school of thought is that many still see sex as a sin, and desire as associated with guilt.

Progressives would no doubt mock this hypocrisy. They would say that the supposed defenders of India’s culture need to take some history lessons.

Apparently the first mention of a kiss in writing was in the ancient Hindu Sanskrit texts, the Vedas.

In Hindu mythology, the God of Love is Kamadeva, who made couples fall in love with each other by shooting arrows made of flowers from a bow made of sugarcane.

Madhya Pradesh is home to the Khajuraho Group of Monuments. They are ancient sculptures that depict sexual intercourse and foreplay in a very explicit way.

And whenever the prudish nature of Indian society is talked about, those playing ‘devil’s advocate’ will always point to one of India’s most famous exports, the Kama Sutra.

If recent Valentine’s Days are anything to go by, expect the Indian news media to be busy on 14th February

Conversely, expect those who are committed to celebrating Valentine’s, to be strident and purposeful in their cause.

Either way, Cupid will be having fun concocting a plethora of games.