Where romance lights up love onscreen, the addition of a third person often causes heartbreak. Here are the most memorable Bollywood love triangles.

In Hindi-Cinema, if one thing is for sure it’s that love stories continue to grace the screen and charm audiences.

Whilst blockbusters have given us some of our most loved on-screen couples, some stories have sparked more emotion with the addition of a third person in a love triangle.

Heartbreak, desire and jealousy are all brought to the forefront in some of the most heart-wrenching stories.

We take a look at some of the most popular Bollywood love triangles which lit up the silver screen.

The epic throwdown between the rumoured off-screen romance of Amitabh Bachchan and his two loves, Rekha and Jaya Bachchan is one of the most well-known Bollywood love triangles.

The film touches upon complicated relationships and infidelity. Amitabh is married to Jaya, his dead brother’s wife but is secretly in love with Rekha.

The complex Yash Chopra film was a big hit and fueled even more rumours between the supposedly feuding Jaya and Rekha and their shared love for Amitabh. 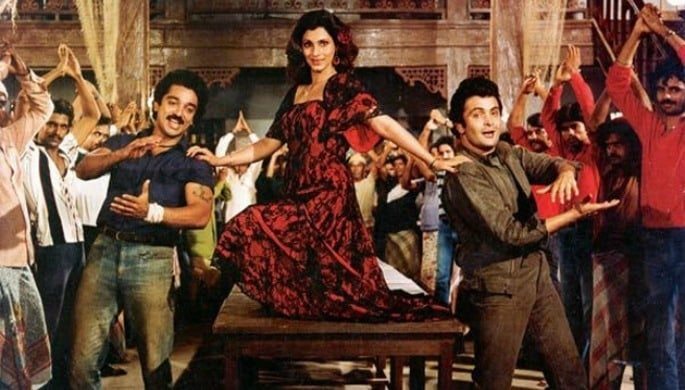 Kamal Hassan’s emotional performance in this love triangle will undoubtedly pull at your heartstrings. Despite loving his childhood friend played by Dimple Kapadia, he never plucks up the courage to express his love.

Unfortunately, before he gets the opportunity to do so, the handsome and charming Rishi Kapoor enters Dimple’s life. Where Dimple falls in love with Rishi, she finds out that Kamal loves her.

Kamal’s performance in the scene where he jokes of his love for her, to allow her to go to Rishi, is why Kamal is such a renowned film icon. Effortlessly drawing emotion, Kamal performance as a generous friend and admirer is impeccable. 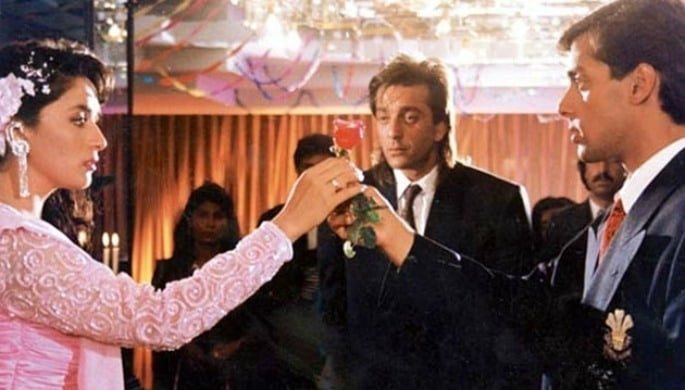 With the three superstars Madhuri Dixit, Sanjay Dutt and Salman Khan in one film, it’s no surprise this film was a hit. Along with chart-topping songs such as ‘Mera Dil Bhi Kitna Pagal Hai’, their performances were well received.

Sanjay’s character gains fans as he writes poetry under the name Saagar and one of those fans is Madhuri. 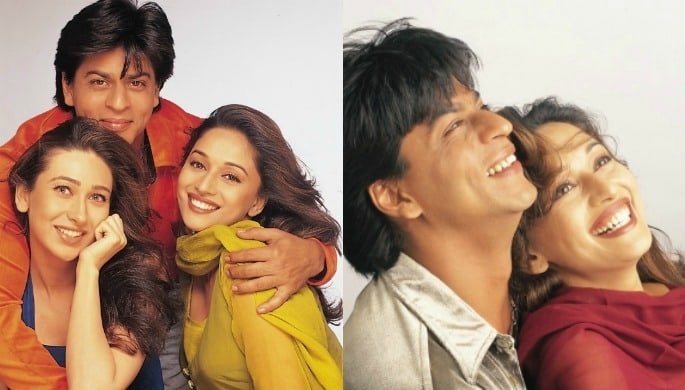 Giving Karisma Kapoor the Filmfare Award for Best Supporting Actress was her role as the friend who loses her love interest to Madhuri Dixit.

In true Yash Chopra style, emotive dancing and smash hit songs have made this one of the most popular films of the 90s.

Karisma’s love for Shahrukh is not enough for him to see her more than a friend. Her tearful and emotional confession of love to Shahrukh Khan is the moment we as the audience truly feel for the heartbroken friend. 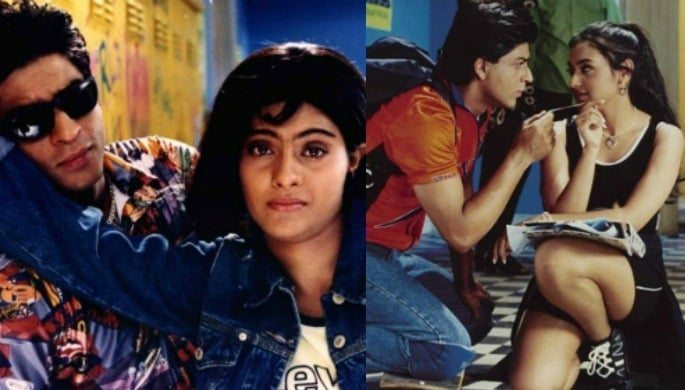 Kajol bawling in the rain during the song “Tujhe Yaad Na Meri Aayi”, probably makes most people in the audience weep with her.

The most endearing friendship between Shahrukh and Kajol epitomises love and comfort between two friends. The tomboy Kajol and Shahrukh’s friendship is unbreakable until the beautiful Rani Mukherjee enters the college. Almost instantaneously, Shahrukh is swept up in the pursuit to woo Rani.

Whilst Kajol leaves the two, and eventually, finds a gorgeous fiancé played by the chocolate hero Salman Khan, fate brings them together again. With the help of some catchy dance numbers, iconic outfits and beautiful chemistry, this film cemented the Kajol and Shahrukh’s status as one of the most romantic onscreen couples in India. 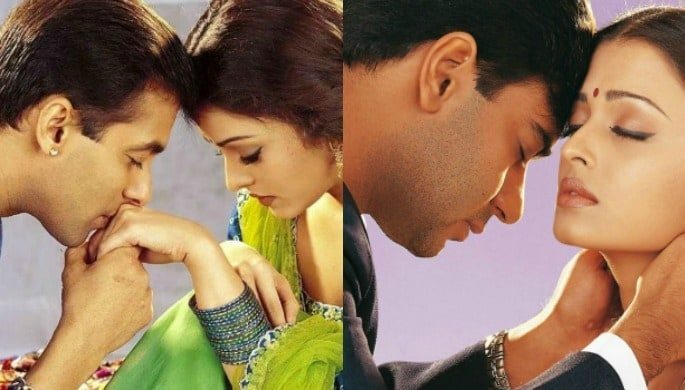 The film which captured the intense chemistry between Salman and Aishwarya is this classic Sanjay Leela Bhansali production. Amongst the grand sets and theatrical dance performances are some tender moments of romance and innocent young love.

Looking breathtakingly beautiful, Aishwarya gains two admirers. Whilst she falls in love with Salman, her family set her marriage with Ajay Devgan.

Upon finding out his wife’s love for another man, Ajay seeks to reunite her with long lost love. Despite their differences, on her journey to find Salman, Aishwarya falls in love with her loving and committed husband. 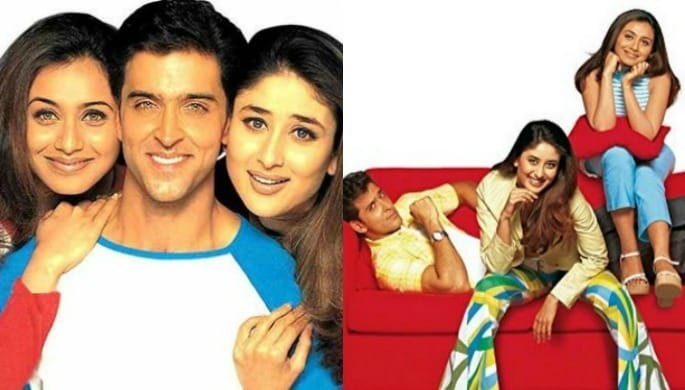 Beauty or brains? That is the question this film raises. After Hrithik falls in love with Kareena as a child, he asks her to write to him when he moves away to London. Though she fails to keep her promise, their mutual friend Rani Mukherjee writes faithfully to Hrithik for years.

As she writes the letters, eventually their friendship becomes love. Problems arise when Hrithik returns to India and believes that Kareena wrote those letters. Completely taken away by her beauty, Hrithik doesn’t even talk to Rani very much. However, after spending time with Kareena he finally realises that she didn’t write those letters.

To complicate matters further, by the time Hrithik realises Rani is his true love, he is already engaged to Kareena. Despite the obstacles, Hrithik and Rani are united at the expense of Kareena’s heartbreak.

SRK wouldn’t be the King of Romance if he didn’t feature on this Bollywood love triangles list multiple times. In a remake of the epic tragedy Devdas, Shahrukh is torn away from his childhood love Paro (played by Aishwarya Rai Bachchan)and sent to London to study.

On returning they reunite, but their love is short-lived as SRK’s mother refuses the match because they are too poor. Aishwarya marries another wealthy man out of spite, and Shahrukh falls off the wagon. Driven by alcohol and misery he meets Madhuri Dixit, a courtesan who falls instantly in love with him.

While SRK initially rebuffs her advances out of his obsession with Aishwarya, he eventually falls for her. Sadly, the film has a not-so-happy ending as Khan falls terminally ill due to his alcohol abuse. He eventually dies at the gate of Aishwarya’s husband’s haveli. 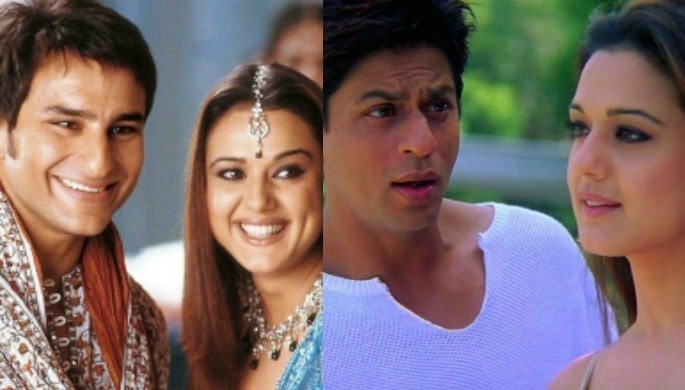 The King of Romance is both charming and irresistible in this smash hit romantic comedy. Where Naina played by Preity Zinta and Rohit played by Saif Ali Khan share an endearing friendship, it was inevitable that love would emerge. However, where Rohit loves his friend, Naina falls in love with Aman played by Shahrukh.

Though Aman initially irritates Naina, his witty personality and persistence in her life cause her to fall head over heels in love with him.

This heart-breaking love triangle takes a shocking turn when we learn that Aman is counting down his days due to a terminal illness.

In a true act of selfless love, knowing his life is coming to an end, he helps Naina move on by finding love elsewhere. Where Aman’s death breaks the heart of all those around him, Naina is given the chance to find love in her friend Rohit. 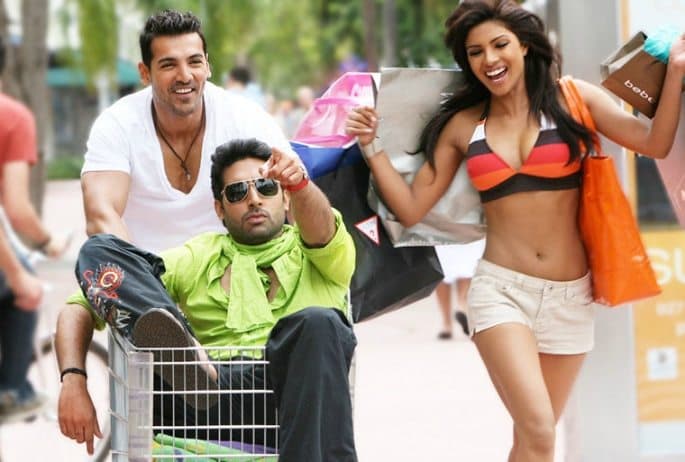 This hilarious comedy stars Priyanka Chopra, Abhishek Bachchan, John Abraham. Living in Miami, Abhishek and John pretend to be gay in order to share an apartment with Priyanka. They eventually both fall in love with her.

However, enter Bobby Deol, who sweeps Priyanka off her feet, and now Abhishek and John are forced to let her go. The comedy of errors is also well known for the hit party song, ‘Desi Girl’. 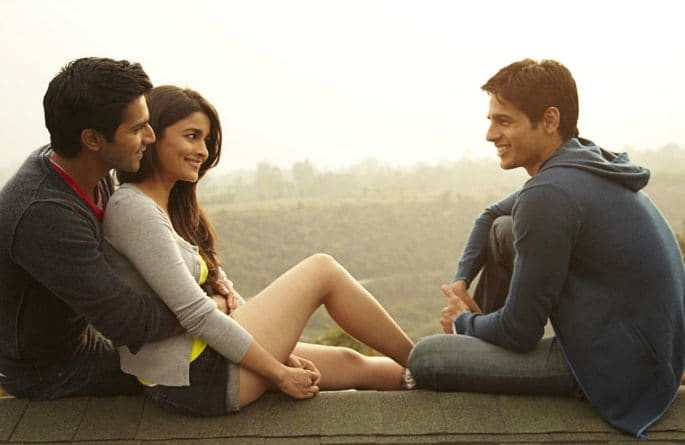 Alia and Varun are the most popular kids in college and are also dating, that is until the handsome and seemingly perfect Sidharth arrives to take the new ‘heartthrob’ status.

While Varun and Sid get off on the wrong foot, they eventually become best friends, although Varun warns Sid off making any advances on Alia.

However Alia and Varun’s relationship is wrought with jealousy as Varun is a compulsive flirt. Alia eventually takes matters in her own hands and flirts with Sid, but for Sid the feelings are very real.

Emotional songs and heart-wrenching performances have made these films some of Bollywood’s most successful and loved films.

Packed with heightened emotions, these Bollywood love triangles often have a bittersweet ending. Where two lovers are united, one individual is always left to watch their loved one find happiness elsewhere.

Momena is a Politics and International Relations student who loves music, reading and art. She enjoys travelling, spending time with her family and all things Bollywood! Her motto is: “Life is better when you're laughing.”
Imran and Sukhvinder Javeed the Married Couple on Big Brother
Big Brother’s Sukhvinder and Kayleigh argue Hair Brushing in Kitchen