Normally known for his cricket, Brett Lee has embarked on a project close to his heart to open music schools in India for deprived children from the slums. Being a passionate musician he has chosen music as the way of giving a chance to kids to realise their dreams.

"It’s a chance to introduce young kids to music"

Australian and IPL cricketer Brett Lee, has opened the first of his planned music schools in India for underprivileged children. Lee has set-up his ‘Mewsic Foundation’ which will provide funding for instruments and teachers for the schools.

The foundation has collaborated with some Non-Government Organisations (NGO’s) and charities in India to develop the programme of providing free music lessons for children from slums who are aged between 7-15 years.

The first school from Lee’s ambitious plan is a music studio which has been opened in Deonar, a suburban neighbourhood of Mumbai. The studio will offer free music lessons to children who live in the nearby slum. 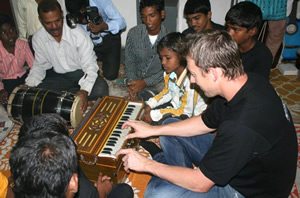 Lee ecstatic about the facility, said, “It’s a beautiful place, the one we just opened in Mumbai, it’s like a sanctuary for the kids. They can learn different instruments, guitar, organ, flute, as well as learn to dance and sing from qualified teachers.”

The impact of India’s slums hits all visitors when they visit for the first time and Lee was no exception and said: “I’ll never forget my first experience of seeing the poverty in India on my very first trip. I’ve seen extreme wealth and extreme poverty in India. I guess I’m lucky to have experienced that because if you only see one side you can’t fathom those extremes.”

“I think every child in the world deserves a chance in life. And what we are doing here with the music centres is to give the boys and girls a chance to fulfil their dreams.” 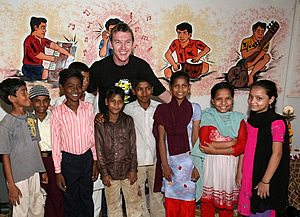 Brett is no stranger to India as a cricket player but also has strong passion for music and after collaborating on a hit song with Asha Bhonsle called ‘Can You Tell a Girl’ his love affair with music became very evident in India. He is feels music is a medium that can bring people together and the studio can provide an excellent method of helping these deprived children develop. “They can learn different instruments, guitar, organ, flute, as well as learn to dance and sing from qualified teachers,” said Lee.

At the inaugaration ceremony for the opening of the school in Mumbai, Lee felt emotional about the achievement ans said: “To see the looks on their faces when I cut the ribbon, they came up and hugged me, they were singing and dancing. It was very moving. These kids have nothing. They’re wondering where their next meals coming from.” 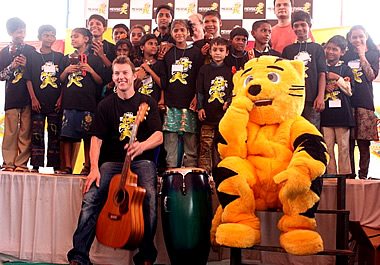 Most people would have thought a player of Brett Lee’s stature would have used sport and cricket as a medium of helping children in this way. Not the case with Brett, as he explained: “I could have easily helped out through sport or cricket. But music is my passion, my love and I know that music has so many healing qualities and powers. That’s what really appealled to me. It’s a chance to introduce young kids to music and help them overcome some of the things they’ve been through, whether it’s losing their parents or leaving home very early or experiencing child abuse.” 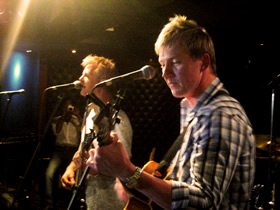 Lee has his own rock band called the ‘White Shoe Theory’ which his set-up with his friend Mick Vawdon. And it looks like they are planning a 2011 tour of India, tweeting on Twitter, they said: “Wheels are in motion for tour of India later this year. September/October maybe. Stay tuned .”

Brett Lee is one cricketer that has come forward to show that his passion for music is there to be shared by all. And what better way than to give deprived children a chance to realise their goals as future singers and musicians in a country that still has a huge rice and poor divide.

Jas likes to keep in touch with the world of music and entertainment by writing about it. He does like hitting the gym too. His motto is 'The difference between the impossible and the possible lies in a person's determination.'
Rahman and Mick Jagger form band
The Merchants of Bollywood