Bollywood rapper Badshah was recently involved in a shocking car accident while travelling in Ludhiana, Punjab leaving his car in ruins.

Badshah was reportedly travelling on an under-construction over-bridge on an intersection on the National Highway 44 when the accident took place.

According to several reports, there were concrete slabs on the roadside near the intersection without any warning signs.

The hazardous weather conditions further added to the already dangerous conditions on the road.

Eyewitness reports stated that the dense fog prevented Badshah from seeing the unattended concrete slabs on the road.

An eyewitness said: ‘’It was foggy. There were slabs on the road. There were no signboards put up. It was the authority’s negligence that caused the accident.’’

Allegedly it was not only Badshah’s car that was involved in the devastating accident. More than 50 vehicles were involved after a canter carrying chemicals crashed into an army truck. 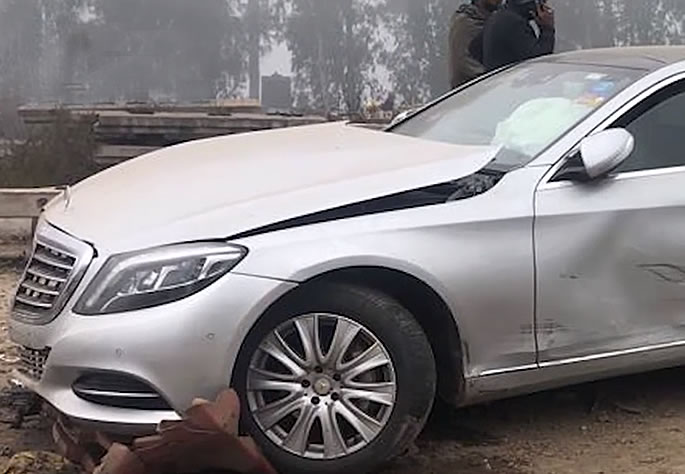 Shortly after images of Bashah’s crushed car went viral on the internet sending his fans into a frenzy.

Thankfully the rapper escaped unharmed in the ordeal.

Badshah was amidst shooting on a film set with fellow singer and actor Ammy Virk when the accident occurred.

India’s highways are often known to be dangerous places yet this is ignored by authorities.

Before Badshah’s accident, veteran actress Shabana Azmi met with a terrible accident on the Mumbai to Pune Highway.

Shabana Azmi was travelling with her husband, lyricist Javed Akhtar and their driver when they collided with a truck.

The actress suffered severe injuries and was immediately rushed to a nearby hospital for treatment while her husband and driver were unharmed.

Shabana Azmi, who is currently recovering from her injuries at home, took to Twitter to thank her fans for their on-going support. She said:

‘’Thank you all for your prayers and wishes for my recovery. I am home now.’’

As of yet, there has been no official statement from Badshah himself addressing the matter.

It seems the Indian authorities need to take immediate action to ensure greater safety for drivers on the road and to avoid future accidents.

We hope Badshah is doing well and has recovered from the shock of his accident.

Ayesha is an English graduate with an aesthetic eye. Her fascination lies in sports, fashion and beauty. Also, she does not shy away from controversial subjects. Her motto is: “no two days are the same, that is what makes life worth living.”
Sara and Kartik create the ‘Do It With A Twist’ challenge
SRK praises Shakira as his ‘all time favourite’