Juggling work, love and life is never easy. Kali Theatre presents Bitched, a slick production about two couples who end up with too many problems!

“What else is there but to howl at the world?”

Bitched (2017) gives us a dark and humorous glimpse into the sexist structures of modern society. It tells the story of four characters who act as catalysts for changing each other’s professional and personal lives.

The sensational play is presented by Kali Theatre, a UK company supporting and developing the visions of female writers from a South-Asian background.

Written by Sharon Raizada, the play interestingly borrows inspiration from her own personal experiences.

Raizada says: “Inspired by my own shock at becoming a mum, I wanted to look at the lives of modern women through the polar opposites of Ali and Suzanne.

“Bitched takes an unflinching look at our lives as we try to negotiate the stresses of work, sex and kids, asking: is it an impossible task?” 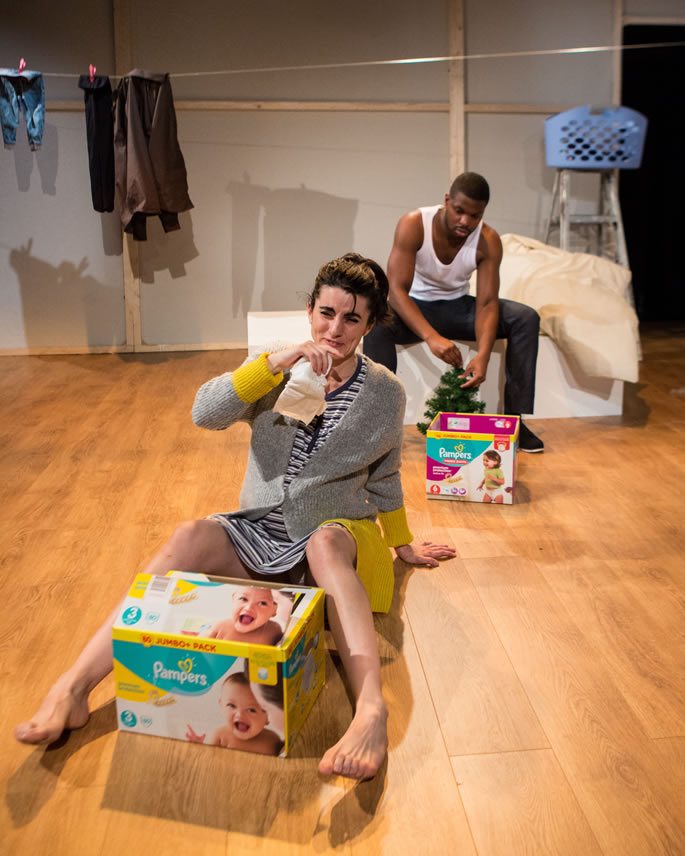 Shireen Farkhoy of Vera (ITV) and Waterloo Road (BBC) fame plays the character of an ambitious hairstylist named Ali who struggles to get back in the professional game.

Darren Douglas, whose credits include Talking to Byron and Hymns to Hip-Hop, portrays her husband Rob. With dreams of becoming a successful artist, Rob expects Ali to sacrifice her work and become a full-time mother.

Soon, the couple cross paths with a jaded yet charismatic pair of gallery owners who begin to shed an ominous light on Ali and Rob’s lives.

Director Juliet Knight weighs in on the play, saying:

“Juggling motherhood and work is a recurring theme in my own life so I am thrilled to be directing Sharon Raizada’s fresh new play which offers a much-needed voice asking why parents struggle to fulfil their own needs and what is the cost?

“Why having children and raising a family in a partnership seems to offer little value or financial reward for the stay at home parent? And what roles do our employers and policymakers have in setting up a healthy home and work-life balance?” 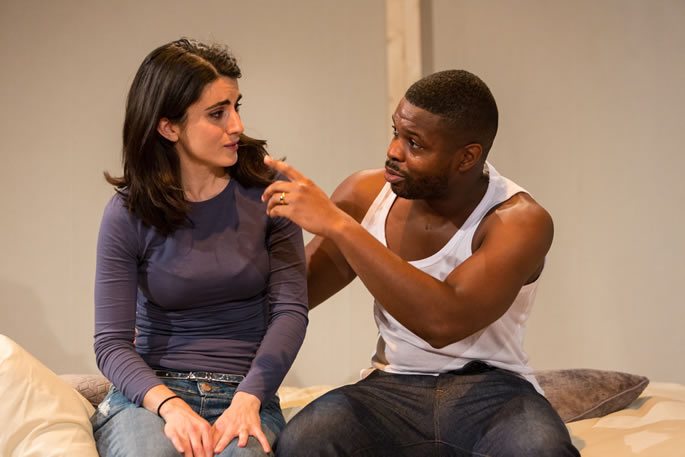 Focusing exclusively on the two couples, Bitched evokes a similar tone and dynamic to that of Who’s Afraid of Virginia Woolf?  – The famous 1962 play by Edward Albee.

The acting performances by the four leads are phenomenal. This is, of course, aided by the fact that each character gets a moment to shine in the plot.

Raizada’s witty dialogue is a delight to hear, and the precise delivery simply proves to be icing on the cake.

Mountford, a Kali Theatre regular, has a list of credits including Eastenders (BBC) and his one-man show Vagabonds – My Phil Lynott Odyssey. 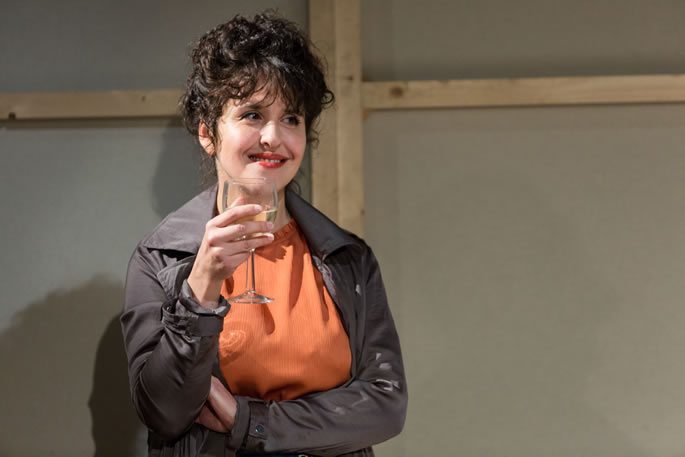 The sounds of murmuring crowds or screaming children help create an ambiance of claustrophobia.

Furthermore, the minimalist set design serves as a creative tool, rather than a drawback. Lighting designer Jai Morjaria effectively uses hues of blue, red and yellow to create a melancholic palette of visuals.

Audiences should watch out for the transition scenes accompanied by dim lights, as the stage transforms in a surreal manner. It seems both natural and choreographed at once.

The gliding movement of the actors to shift props and change the scenery resembles a dance.

It seems both natural and choreographed at once. The gliding movement of the actors to shift props and change the scenery resembles a dance sequence. This is quite a treat to watch. 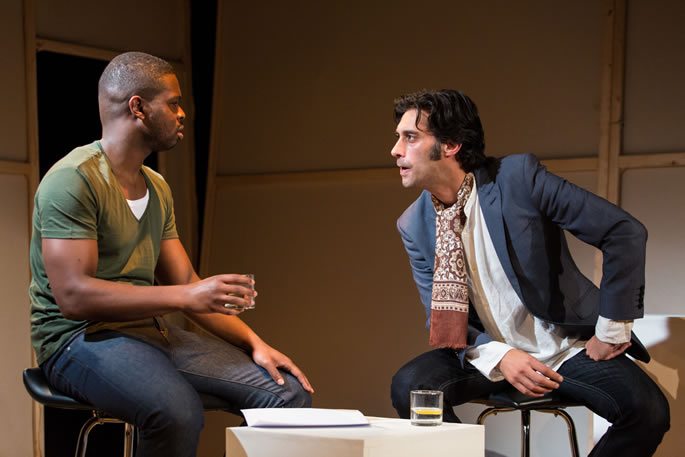 On the weaker side, the plot occasionally suffers from a few pacing issues. There is a scene where one couple is engaged in a nasty verbal fight. The change in tone arrives abruptly, rather than slowly unravelling.

Even the impeccable acting cannot save lines that sound a bit too melodramatic, sticking out like a sore thumb.

The execution could be sharpened at such moments. But on the whole, it would be safe to say that the flaws in the play are rather negligible.

“What else is there but to howl at the world?” asks Nirjay at one point.

The metaphor of howling is sprinkled throughout the story. Other than the obvious reference to canines as also seen in the title choice, it could extend itself into a number of meanings.

From an expression to a loved one to a cry for help, there exists a primal flair in human beings that simply can’t be ignored in desperate times.

The story serves a melting pot of themes that are highly relevant to the modern age. 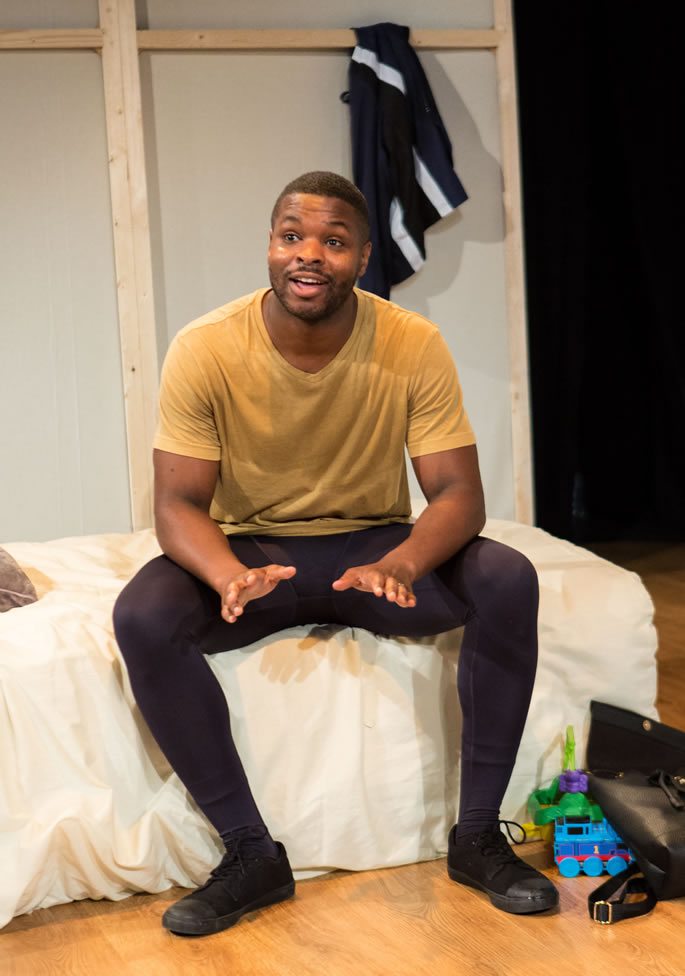 At first, Suzanne’s cynicism is a seemingly stark contrast to Ali’s naivety. But closer inspection reveals that their struggles as mothers who dare to keep working might have more in common than expected.

“I was very aware of the change in my own life that came with being a new mother; it was a shock to find the independence and autonomy of a young working woman that I’d always taken for granted, taken away, however temporarily.”

The most interesting aspect is the number of themes the play braids into the narrative.

It asks some very interesting questions regarding power dynamics. Is the mother meant to be the stay at home nurturer by default? How does an artist make a living without having to compromise on their principles? Where is the line drawn between passion and dysfunction in a marriage?

The show on 2 November 2017 will also include a post-show discussion with guest speakers Rebecca Asher, author of Shattered: Modern Motherhood and Shaminder Nahal, Channel 4 Commissioner of Arts and Topical Programmes.

Sadhana enjoys the company of dogs, writing and travelling in that order. As an English & Media graduate, she belives in the power of humanities and the creative arts to make an impact. She tries to live by the saying "Hakuna Matata".