DESIblitz brings to you all the masaledar hungama from the Bigg Boss House. It is the final clash between Sevaks and Maliks. You don’t want to miss it!

The luxury budget task ‘Raaz’ seems to have revealed a lot more than just the secrets of Indiawale.

It has exposed the real side of many contestants inside the house, one of them being Priyanka Jagga. Fights and disputes have become her sole weapon to stay strong in the game.

As Bigg Boss introduces the next riddle for the Sevaks stating that the mother of one of the commoners works at a beedi factory for her living, the Sevaks make few wrong guesses and attribute the secret to Priyanka Jagga.

Taking offence to this, Priyanka loses her temper and firmly replies that her mother is a lawyer and does not work at a beedi factory. Her devious avatar comes into the picture and knowingly or unknowingly she ends up hurting many people around.

Later in the night, fights and drama continue as Priyanka once again picks a fight with Rohan. After Rohan accidently spills water on Priyanka, she gets furious and starts abusing him.

She instantly decides to punish him and locks him in the jail. Rohan feels victimised and after being released from the jail shuts himself up in the washroom and cries his eyes out.

The next morning, the contestants wake up to the song ‘Bach Ke Rehna Re Baba’ excited for a new day and some new challenges. 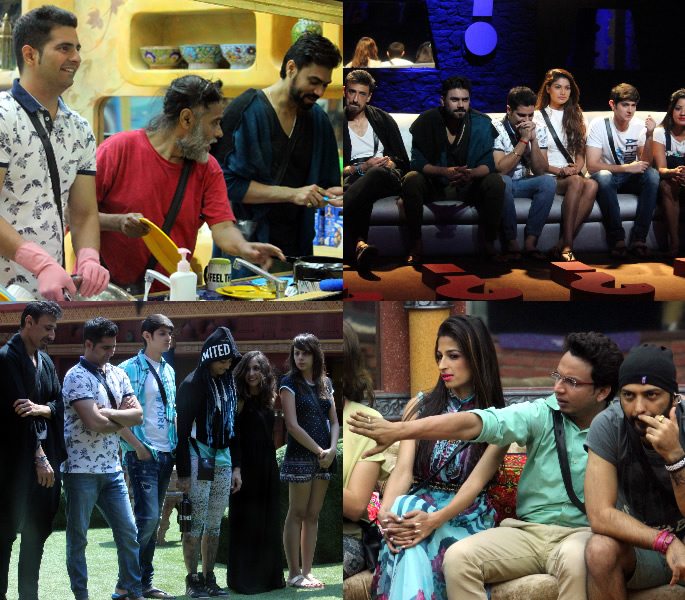 In the garden area, while Gaurav takes a yoga session with Karan and Nitibha, the masterminds Priyanka, Manveer, Manoj and Navin continue to discuss the previous night’s fiasco.

Later in the day, Bigg Boss asks the housemates to gather in the garden area facing the jail. After creating intrigue in the minds of the contestants, Bigg Boss reveals that two housemates will end up in the dungeon after the culmination of the luxury task.

With only a few chances left for the Sevaks to secure their place as Maliks inside the house, they spend most of the day discussing and solving the riddles. Bringing contestants’ worst nightmare to reality, Bigg Boss further asks the Sevaks and Maliks to nominate the weaklings from their respective teams.

In the evening, Priyanka dresses up for the Karwachauth puja and asks Swamiji to do the rituals.

All hell breaks loose after Mona and Lopa make fun of Priyanka’s fake Karwachauth puja after which she lashes out at them. She calls them names and makes some hard-hitting remarks at Mona and even makes her cry.

Furthermore, Bigg Boss calls Karan and Priyanka in the confession room and hands over an envelope with their family pictures and a box of sweets to break their Karwachauth fast.

After seeing the pictures, Priyanka and Karan get emotional and thank Bigg Boss for the kind gesture.

With the task ‘Raaz’ reaching its final leg, will the Sevaks emerge victorious and turn the tides inside the house? Who will be the two ill-fated contestants be to be locked inside the Bigg Boss jail?

Mariya is a cheerful person. She is very passionate about fashion and writing. She also enjoys listening to music and dancing. Her motto in life is, "Spread happiness."
Is it True? Have Ranveer and Deepika Split-Up?
Karthik shows off Sweet Selling skills in Week Three of The Apprentice