In week three of The Apprentice 2016 the contestants produce and sell sweets on the streets of Brighton. Karthik proves himself to be an expert seller.

In week three of The Apprentice it’s a sweet task as the teams must create their own candy to sell at the Brighton seaside.

Following the disaster of last week’s jeans campaign, Lord Sugar decides to mix up the teams and even appoints each project manager himself.

Chocolatier Alana takes charge of team Titans and decides on to go down the sophisticated route with contemporary candies, pillows and toffee. She flavours them with Champagne and Strawberry, and Cappuccino.

Sausage factory owner Oliver goes for traditional sweets in team Nebula as the rock and fudge catches his taste-buds. His choice of flavour for fudge (salt and vinegar) however proves problematic as it puts many customers off.

Unfortunately for team Titans, they are told that rock is the hardest sweet to make! 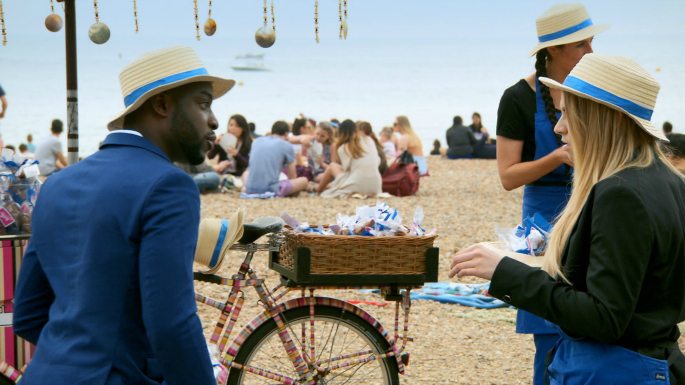 Karthik struggles to make the fiddly rock and he even drops the mixture onto the floor. Things get worse for the team as they persuade buyers to purchase their sweets which have broken.

Oliver struggles immensely with managing the buoyant team, and can’t make himself heard, or decide on what he wants to do.

On team Nebula, British Asian Trishna shows she’s good at selling in this week’s task. She uses her football hobby to score a deal with a football stadium whose team colours match their sweets.

Alana breaks down under pressure in the kitchen but her teammates reassure her she is doing a good job.

Meanwhile, team Nebula finds it hard to keep up with the kitchen supply and demand. Karthik’s says: “My arm’s literally about to fall off.”

Last week, Lord Sugar told Karthik to be more of a team player. This week he protests against his project manager Oliver:

But Karthik pulls through for the team and keeps the peace: “The decision is yours. I don’t want the label as the disruptor.”

Karthik shows of his selling skills in the streets of Brighton: “For £2.50 you can get something better,” he tells one interested customer: 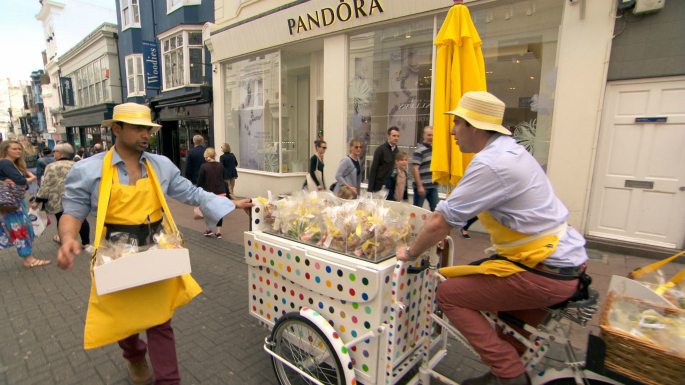 “You buy two and you get the third free. It’s good isn’t it?” he tells another.

Oliver bikes up and down the Brighton seaside calling out to people to buy their sweets, and Karthik yells “and bring your money” after them.

And of course, Karthik is modest as ever. He says:

As the sweet takings are counted, it is a victory for team Titans.

Project manager of team Nebula Oliver is this week’s unlucky candidate to be fired.

Lord Sugar tells him his best hope of winning £250,000 is to buy himself a scratch card.

Will Karthik keep up his winning streak? Tune into the next episode of The Apprentice on Thursday 27th October at 9pm on BBC One.