Karthik is a Fashion Guru in Week Four of The Apprentice

Karthik proves he knows fashion as well as business on week four of The Apprentice. Find out how the teams do selling designer goods.

“At least I saved myself the cab fare”

In week 4 of Lord Sugar’s hunt for his next business partner, the teams promote designer products for leading retailer, Liberty.

The competition is getting harder and more intense with 16 business-hungry candidates ready to fight for Lord Sugar’s £250,000 business investment.

Team Nebula is managed by previous Liberty worker Grianne but is faced with a shock exit before she can even begin.

Business owner Aleksandra King quits the process admitting she is no longer ‘enjoying it’ and that the process is ‘too overwhelming’.

She goes against Karthik’s advice to ‘stick it out’, and decides to go back to her husband and kids.

An unsympathetic Lord Sugar address Aleksandra’s departure in the boardroom. He says: ‘If you can’t hack it… Get out.’

He adds: “At least I saved myself the cab fare.” 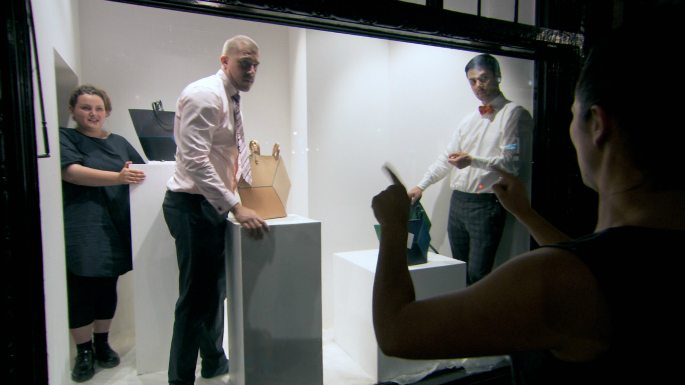 After the shock exit, team Nebula decide to carry on as normal and agree on luxury leather handbags as their product for retailer Liberty. This is after a long debate between bags and scarves.

The other team, the Titans, do opt for scarves but with an animal print theme and attractive window dressing. It’s a risk but Sofiane decides to roll with it and he puts Dillon in charge of the personal shopping and Jessica in the window front.

Jessica is the multitasker of the day – both the best seller and manager of the window presentation. Dillion tentatively asks her to help him with personal shopping but is shouted down by Trishna and Alana.

On the other side, British Asian Karthik Nagesan is told by Grianne to be Francine’s runner and listen to her orders rather than sell on the shop floor.

Unlike his typical Karthik manner, he does not make it a big deal as he agrees to this subordinate role.

In the past, Karthik frequently battled with the Mukai about his managerial decisions without any discussing them with his team.

However, since then, Karthik has shown he is a team player by obeying his project manager’s decisions. 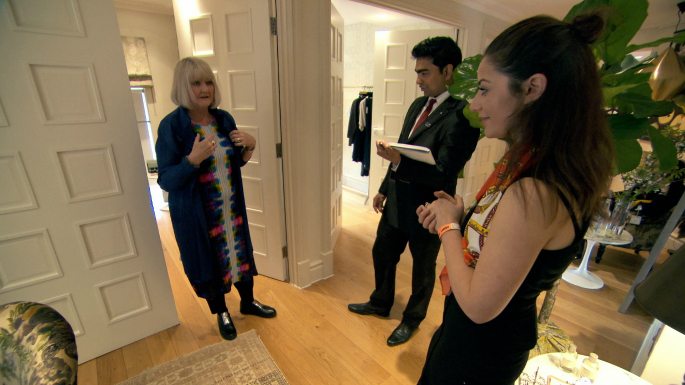 This week, Karthik uncovers his fashion expertise as he looks through clothes and styling for women, and even disagrees with Francine’s selections saying: “Wouldn’t this make her waist look big?”

He proves to be right as their client thinks their choice of a white, frilly top will make her ‘look like a fat aunty’. Who would have thought Karthik would be a fashion expert?

Turning on his charm, Karthik proves how he is also great at selling: “How do you feel when you wear it?” he asks one customer.

Claude also calls him a ‘fashion guru’ and mentions how his charming selling skills are paying off.

Again, Karthik explains his expert selling skills through another metaphor:

“The ability of a fish should not be judged on how well they climb trees. Monkeys climb trees, my skills are elsewhere.”

After a day of trading and a spike of rush hour sales, the aspiring business entrepreneurs face Lord Sugar in the boardroom for those all important results.

It’s a victory for team Titans who made total sales of over £5,000 and enjoyed a croquet sessions as a treat.

Team Nebula battle with who was to blame for their loss. Mukai mentions it was their window display as the other team had someone in the window to attract people’s attention. Lord Sugar agrees. 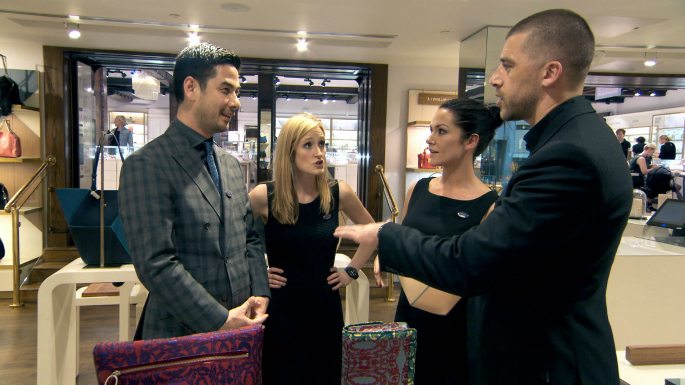 Project manager Grianne adds Karthik is hard to manage because he is ‘loud and abrupt’.

She says it would have been a risk putting Karthik on the shop floor. But Karthik disagrees and says he would have proved himself the best seller.

Karthik is brought back into the boardroom because Grianne didn’t know where to place him within the team.

Defending his place to stay in the process, Karthik says he is ‘flexible’ and ‘lean’ and has not yet had the opportunity to show off his leadership skills.

Lord Sugar allows Karthik to stay in the process, but tells him: “You talk a good game but I don’t see any end product there.”

Mukai is the unlucky candidate to be fired from the process. Lord Sugar blames him for heavily influencing project manager Grianne for going with handbags as their main product and a poor window display.

Next week’s task is all about bike products. But punctures appear to defeat team spirits and Lord Sugar tells the candidates: “You so-called intelligent people have left me speechless.”

Watch the next episode of The Apprentice on Thursday 2nd November 2016 at 9pm on BBC One.