Why Karthik gets Fired in Week 7 of The Apprentice

Karthik finally gets to be a project manager in The Apprentice but fails miserably. He and another candidate find themselves directly in the firing line.

“I will have to go on and make the billion dollar unicorn company that I want to make without him.”

In week 7 of The Apprentice, the remaining candidates take part in selling high-end water-sport products at the Poole Harbour Boat Show.

From boats to jet-skis, whichever team sells the most and gets the most money wins.

Karthik, also known as ‘The Big K’ finally has the chance to be a project manager. In true Karthik style, he is as confident as ever.

Karthik says: “I am a brilliant project manager. One of the proofs of that is that I project managed the conception of my baby boy. I know the exact hotel room.”

Based on previous tasks, the viewers and the team assume Karthik will be a dictator as the project manager. He has previously been known as the “loose cannon” or “disruptor.”

However, as project manager, he is quite the opposite. He listens to his team and informs them of his thought processes. Did this make him lose the task?

Lord Sugar’s advisor Claude believes Karthik made a huge error in distributing his team. Karthik chooses Samuel to join him in customer sales when Samuel has experience at the high end.

Karthik struggles to make authoritative decisions when picking water-sport products for the team to sell. He is torn between snorkels and cushions, causing Samuel to step in and make the decision. 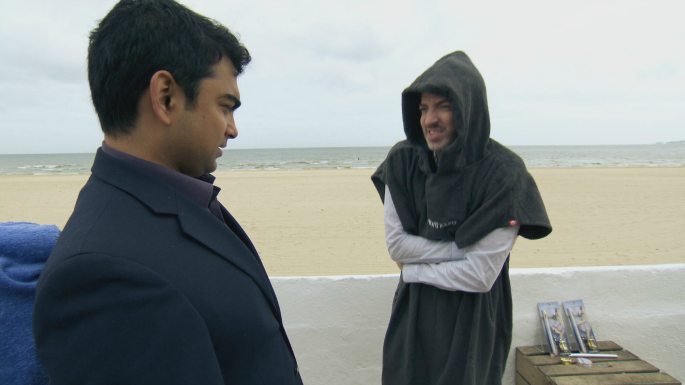 Karthik’s team also miss out on getting the paddleboard product as both teams fight for it. Team Nebula secure the paddleboard as they ask the right questions such as exclusive sale prices.

But Karthik’s enthusiasm throughout the task cannot be doubted. Even in the heavy rain, he motivates his team. He says: “When the going gets tough, the tough gets going.” Now that’s finally a saying we have actually heard before!

The team suffer from slow sales prompting Karthik to strip off to sell the changing robe: “It feels so nice I can just reach in and change my bra,” he says. But teammate Dillion is not impressed and intervenes, telling Karthik: “You cannot strip off in public.”

When it comes to the results, team Nebula, led by Francis, gain the most profit ever to succeed on a task on The Apprentice earning £40,000.

Karthik tries to defend himself. He says: “A captain is only as good as his team,” but fails to impress Lord Sugar. He immediately fires Karthik as he cannot trust him to bring anyone back in the boardroom. 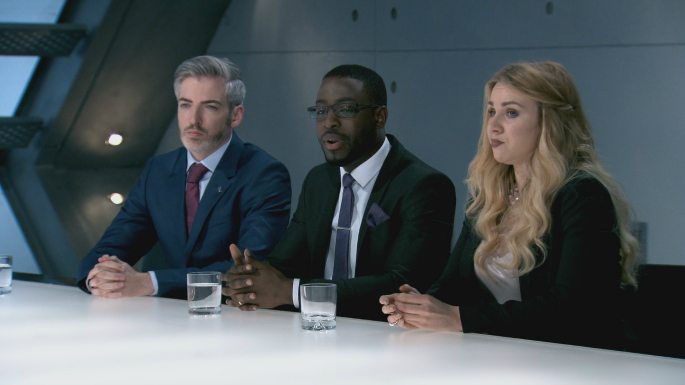 It is a double firing as Samuel is also sent home. He leaves because he is known for selling for himself rather than the team and being a team player.

In the taxi back, Karthik says Lord Sugar made a big mistake and should have looked around the table at the weaker candidates. He adds: “I will have to go on and make the billion dollar unicorn company that I want to make without him.”

Karthik tells Digital Spy that he regrets fighting for his place in the boardroom so much which lead to Lord Sugar suddenly firing him.

“I’m annoyed at myself, because I think Lord Sugar fired me on the basis of emotion rather than logic. And the emotion was because I pushed him into a corner. You know like the guy in the quicksand, the more they struggle, the more they sink?”

We will miss Karthik’s unique anecdotes, unwavering confidence and for forgetting people’s names.

Viewers are sad to say goodbye to a very entertaining Apprentice candidate, and have already suggested Karthik should go on Big Brother!

Next week on The Apprentice, the teams host events to the public, including parties at sea world and Madame Tussauds.

How will the teams cope without ‘the Big K’? Will Karthik consider Big Brother?

Check out our exclusive interviews with Apprentice candidates Karthik and Trishna.

Is Marriage on the Cards for Bollywood beauty Sonakshi Sinha?
Alia Bhatt Brightens up the Bigg Boss House