Is Marriage on the Cards for Bollywood beauty Sonakshi Sinha?

Sonakshi and her rumoured boyfriend Bunty are all set to tie the knot state some media reports. How much of this is true? DESIblitz explores.

"Sonakshi and Bunty are allegedly in a serious relationship"

Bollywood siren, Sonakshi Sinha’s, closeness to sports and celebrity manager, Bunty Sachdev, has given rise to strong speculations about the two getting married soon.

A picture of the Lootera heroine chilling with Sohail Khan’s brother-in-law has gone viral on the Internet.

The otherwise hush-hush love affair, that supposedly started way back in 2012, came into the spotlight after the photograph emerged, recently.

From a very long time, the Dabangg actor and Seema Sachdev Khan’s brother, have been making separate entries and exits from parties to avoid being caught together on camera.

Bollywood’s Akira who has reportedly always wanted to keep her love story under wraps had in fact, in the past, slammed a leading daily for publishing an article of how she and her special man had spent an intimate evening all by themselves, at the latter’s home.

The Dabangg star, is said to have been appalled, that her private meeting went public.

According to sources in B-Town, Sonakshi and Bunty are allegedly in a serious relationship and will get hitched in the near future.

And, industry insiders suggest, this is exactly the reason why the Paro of Rowdy Rathore, has been maintaining a low profile and has been making very few public appearances and also isn’t keen on signing more films at the moment. 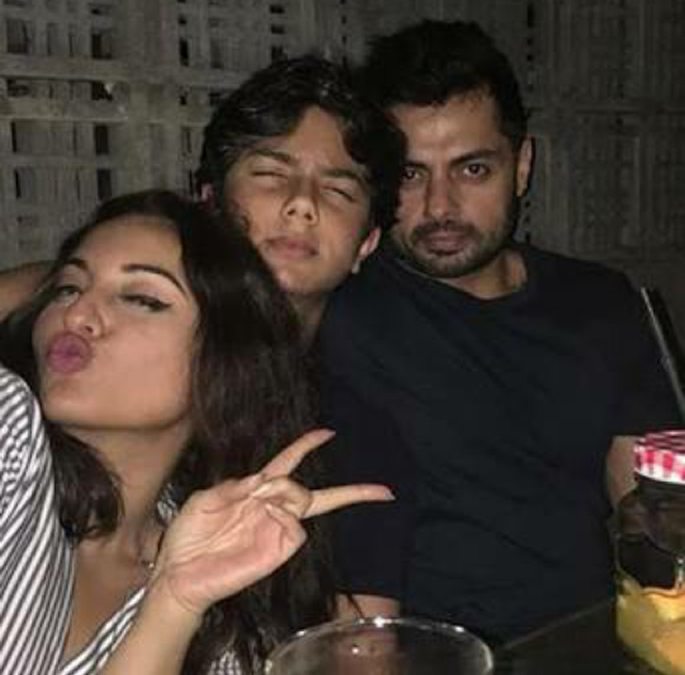 She plans to settle down first and later post marriage think about starring in new projects, we are informed.

Speaking of facts, the 29-year-old actor, is currently busy with the filming of Noor and has been rarely spotted promoting her upcoming release Force 2, where she stars alongside Bollywood heartthrob, John Abraham.

Another movie of Sonakshi Sinha, Ittefaq, is at the pre-production stage.

Interestingly, this is not the first time Bunty Sachdev, has been linked to a B-Town, belle.

He is said to have dated quite a few sexy and attractive women of Bollywood filmdom.

Sushmita Sen, Neha Dhupia, Sameera Reddy and Dia Mirza are some popular names who are believed to be a part of Bunty Sachdev’s colourful past.

So far, Miss. Shotgun Sinha, has on record dismissed all reports of her relationship with Sachdev, the owner of Cornerstone, an agency that is responsible for managing top cricketers of India the most prominent being the dashing Virat Kohli, who is thought to be dating Bollywood star, Anushka Sharma.

According to them, the dusky beauty gets angry at the mere mention of any of her beau’s ex-girlfriends or ex-wife, for that matter.

Well, just like us, if you are still wondering if there is an impending marriage in store for Sonakshi and Bunty? And what’s actually brewing between Mitali of Bullet Raja fame and a certain Mr. Sachdev?

We would say keep watching this space to find out.

Nazhat is an ambitious 'Desi' woman with interests in news and lifestyle. As a writer with a determined journalistic flair, she firmly believes in the motto "an investment in knowledge pays the best interest," by Benjamin Franklin.
Rock On 2 is where Shraddha Kapoor joins Farhan Akhtar
Why Karthik gets Fired in Week 7 of The Apprentice