After the elimination of celebrity contestant Karan Mehra, the sad Bigg Boss housemates are surprised by Alia Bhatt who cheers them up with fun and games!

Bollywood star Alia Bhatt enters the Bigg Boss House to spread some love and positivity. She makes a grand entry with lots of balloons in her hands and the housemates give her a warm welcome.

Alia greets all of them and announces that Manu is her favourite contestant and also advises him not to overthink and play the game wholeheartedly.

Furthermore, Alia opens up her ‘pitara’ and introduces an exciting game.

She challenges the men of the house (except Om Swami and Rahul) to woo her with some cheesy lines and unique props. All try their hands at impressing Alia, Manu emerges as the clear winner.

As a reward of his outstanding efforts, Alia sings a beautiful song ‘Ae Zindagi Gale Laga Le’ only for him. Up next, Alia flags off a Kabaddi match, wherein Gaurav and Rohan fight it out with Manveer and Manu. After a tough match, once again, Manu’s team wins the game.

Alia gratifies the efforts of both the captains, by giving Rohan a message from his father where he is singing ‘Papa Kehte Hai Bada Naam Karega’ for him. On the other hand, Manu gets a motivational message from his girlfriend. 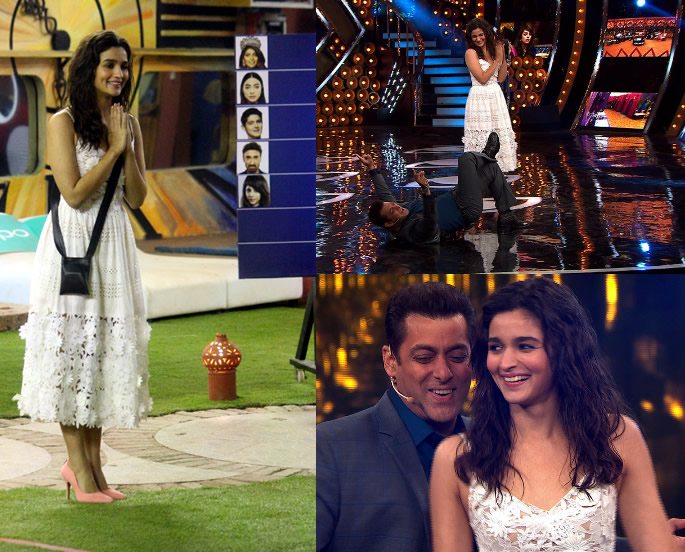 As Rohan and Manu are left teary-eyed, they thank Alia for this wonderful gesture. Before making an exit from the house, Alia asks all the contestants to dedicate proverbs to their fellow housemates.

Soon after, Alia joins megastar and Bigg Boss 10 host, Salman Khan on stage for a fun-filled session. He pulls Alia’s leg by questioning her about her Dear Zindagi co-star Bollywood superstar Shahrukh Khan not joining her on the show.

Raising the entertainment quotient, Salman also sings his hit number ‘Jag Ghoomiya’ for Alia. As an avid fan of Bigg Boss 10, Alia tells him that according to her, Manu, Rahul, Lopa and Manveer are the strongest contenders and she will be rooting for them.

Salman further introduces the big box segment where they both have to pick one item each from the box and sell it like a tele marketer. 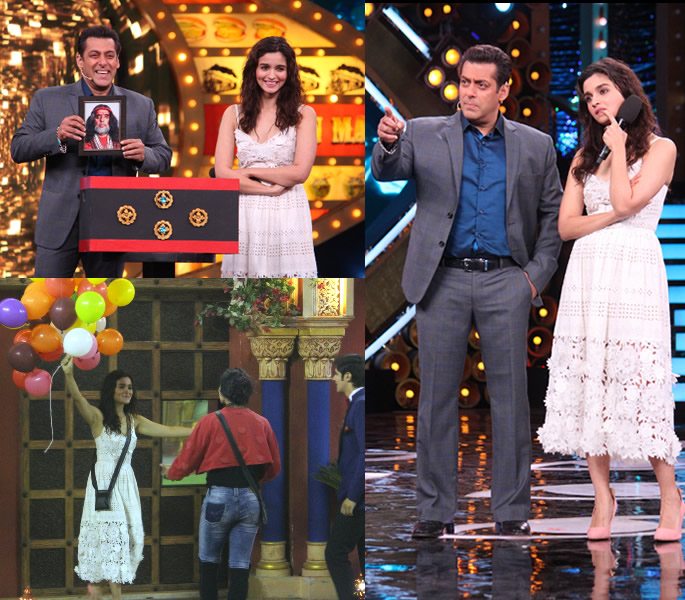 While Alia attempts to sell a ‘kaccha’, Salman leaves everyone in splits by selling Om Swami’s photo. Up next, Salman introduces another game where Alia is given cut-outs of popular male actors from the Hindi film industry and is asked to keep one and hide another.

When she is asked to choose between Shahrukh Khan and Sidharth Malhotra, she keeps Shahrukh and hides Sidharth.

This fun night comes to an end with Salman Khan informing the contestants about double eviction leaving them in a state of shock. After Karan, who will be the next contestant to get evicted from the show?

To find out watch Bigg Boss 10 daily at 9 pm on Colors TV UK.

Mariya is a cheerful person. She is very passionate about fashion and writing. She also enjoys listening to music and dancing. Her motto in life is, "Spread happiness."
Why Karthik gets Fired in Week 7 of The Apprentice
Alia Bhatt and Jacqueline Fernandez Belly Dance on Jhalak