India’s Maharashtra state has banned the slaughter, consumption, sale and possession of beef which could result in a five year jail sentence. The law has had varied reactions, with many taking to social media to express their views using #BeefBan.

"Our dream of ban on cow-slaughter becomes reality now.”

The Indian state of Maharashtra has banned the consumption of beef for its citizens.

Those found selling or eating beef can face up to five years in jail as well as a Rs 10,000 fine. Cow slaughter is now a non-bailable offence, and even the possession of beef is contraband.

It was initially passed in 1995 when BJP-Shiv Sena was in power. Two decades later, with return of BJP, the preservation of some of India’s sacred animals in Maharashtra is now safe. 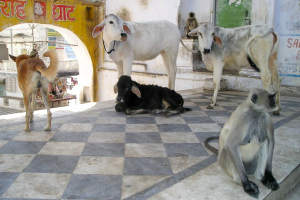 The ban follows strict Hindu traditions that forbid the consumption of beef and see cows as sacred beings. Making 80 per cent of India’s 1.2 billion population, the restriction of beef is quite common in India.

Other states in India however only ban slaughter as opposed to sale, which still allows consumers to import beef from other states. The Maharashtra government has however given a carpet ban on slaughter, possession, sale and consumption of the sacred meat.

The Bill also extends to the slaughter of calves and bullocks. Allowances to the Bill are buffaloes, of which consumption is still allowed. Buffaloes are considered to give a lower quality of beef meat.

Chief Minister Devendra Fadnavis tweeted out his thanks to President Mukherjee saying: “Thanks a lot honourable President sir for the assent on Maharashtra Animal Preservation Bill. Our dream of ban on cow-slaughter becomes reality now.”

While many religious Hindus support the new law, there have been a number of critics opposing it. The law means thousands of beef traders will be left jobless. Other concerns also surround the cost of looking after the animals after they are past the rearing or milking age. It is thought that farmers will be left to look after them until they die of natural causes. 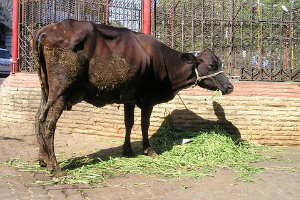 It may also invite a surge in the price of other meats. Beef currently costs less than chicken and mutton, and reportedly, 90,000 kg of the meat is consumed daily in Mumbai alone. Its ban might mean that poorer families will have no access to meat in their diet at all.

President of the Mumbai Suburban Beef Dealer Association Mohammed Qureshi added: “Apart from rendering people jobless, the immediate effect will be the spiralling price of other meats as people will be forced to gravitate to them.”

Sangli beef trader, Rajendra Dhende said: “A recent government report has stated that there is nearly 61 per cent fodder shortage in the state.

“By banning the slaughter of old and infirm animals, the government is doing grave injustice to the healthy animals and farmers of Maharashtra.”

With strict regulations of beef in many states, much of India’s beef is exported, and is the second biggest export after Brazil, with almost 20 percent. The trade succeeds the popular basmati rice and is worth $4bn (£2.6bn) each year.

Social media has been rife with comments for and against the beef ban, under the hashtag #BeefBan, inviting a number of memes to aid discussions.

Writer Shobhaa De said: “Where’s the beef ? Mr. Phadnis (Fadnavis) and others, I am willing to face 5 years in jail to defend the right of beef eaters in Maharashtra.”

Actor Raveena Tandon who supported the ban, tweeted: “We believe everything (living and nonliving) is a manifestation of the divine consciousness. Hence respect for all.”

“Too bad cows can’t tweet their point of view in response to the outrage about the #BeefBan.”

Gaurav Kapur tweeted: “A friend has invited me for a Sunday Roast lunch. I will be taking some wine and 2 FIRs. #BeefBan.”

Others pointed out feelings of injustice to other serious matters including the lack of necessary safety for women in India.

Juwal Bose tweeted: “Cows are way better in getting a law passed in their favour than the females in my species in #india #beefban.”

Comedian Neeti Palta added: “Good to know a cow can now step out after dark and wear what she likes.”

The Maharashtra beef ban is a bold but unsurprising move for the BJP. Prime Minister Narendra Modi has expressed his wishes to introduce a national cow-slaughter ban since his win in the 2014 general election. Now with Maharashtra leading the way, this could soon become a reality.

Aisha is an editor and a creative writer. Her passions include music, theatre, art and reading. Her motto is “Life is too short, so eat dessert first!”
85 Birmingham Restaurants Rated ‘Zero’ for Hygiene
The Indian Spices that Rule the World