Amitabh Bachchan treats SRK’s son AbRam to candy floss at Aaradhya’s birthday party. He shared the adorable images of the four-year-old on Twitter.

"As for this little bundle .. he wanted the fluffy 'buddhi ka baal' cone."

On 18th November 2017, the Bachchan family celebrated Aaradhya’s 6th birthday. They hosted a wonderful party, inviting many of the famous faces from B-Town and their children.

As expected, SRK and his four-year-old son were amongst the guest list. They shared an adorable moment with Amitabh when AbRam wanted some candy floss.

On Twitter, the legendary actor explained: “As for this little bundle .. he wanted the fluffy ‘buddhi ka baal’ cone .. so we took him to the stall made one for him and the joy of getting it is just priceless.”

The images show the adorable AbRam, excited and impatient to get his delicious, pink candy floss.

When he finally receives the gorgeously fluffy treat, the four-year-old shows an utterly adorable, big grin. We’re sure you’ll agree that he is a charming little boy in these pictures!

T 2716 – And as for this little bundle .. he wanted the fluffy 'buddhi ka baal' cone .. so we took him to the stall made one for him and the joy of getting it is just priceless .. Abram, jr Shahrukh .. delectable !! pic.twitter.com/8SMF9YsH7p

It seems his infectious smile warmed the hearts of both Shahrukh and Amitabh. Both the men laugh as AbRam begins to eat the party snack.

Even fans fell in love with the photos and commented how adorable AbRam looked.

But SRK delivered the best message on the enchanting photos. He thanked Amitabh for the moment, but also made a comical joke. He revealed that AbRam sees Amitabh as SRK’s dad! Well, the two actors are the biggest names in Bollywood – we can see why AbRam would make the mistake.

Thank u sir. This is a moment he will always cherish. By the way he thinks u r my ‘papa’ when he sees u on TV. https://t.co/2WUiFPAEWy

This beautiful moment captures the wonderful atmosphere of Aaradhya’s birthday party. Indeed, it seems speculation that she would have a big bash was true. Featuring a mini theme park for the children, the occasion was enjoyed by all.

We have to mention the beautiful princess gown the six-year-old wore for her special party.

A pink embellished dress with sequins and floral embroidery, Aaradhya looked utterly adorable.  She also wore a silver tiara on her head.

Devoted parents Abhishek and Aishwarya stood with her for a picture, showing warm smiles as they celebrated their daughter’s birthday. 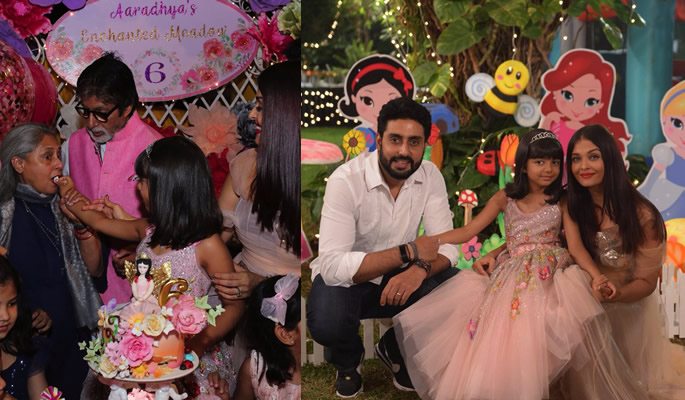 With the party a massive success, it’s heartwarming to see Amitabh share a wonderful moment between him, SRK and AbRam.

As AbRam grows up, he has a remarkable similarity to his father. Not just in looks, but in his popularity.

Could he one day take over the ‘King Khan’ title from his father? We’ll only know in years to come, but perhaps Shahrukh may have to watch out!