Shahrukh Khan’s youngest son, AbRam has turned four and celebrated his birthday with a fun party with friends.

Doting mother Gauri Khan shared an adorable picture of AbRam on Instagram with his older sister Suhana. The picture sees the stunning 17-year old Suhana cuddling the birthday boy in her arms.

Gauri captioned the image with, “Gemini Gorgeousness…” as the two siblings share their birthdays in May.

AbRam who turned four on 27th May 2017 is already a mini version of SRK and enjoys his own immense fan following.

Shahrukh was seemingly overwhelmed with the birthday wishes and love for AbRam on social media. He posted a message of thanks on his Twitter page:

I felt that only parents know how to love their child…the overwhelming msgs for AbRam make me realise u all lov him so much too. Grateful.

The party was supposedly a spectacular one for a 4-year-old, and Shahrukh Khan even gave away a few details of what had taken place, including jumping jacks and superheroes!

We’re not surprised that the little one was the life of the birthday party, and with non-stop fun and games, SRK also tweeted how he was left “exhausted” by the end of it!

Exhausted after the little ones party!! Jumping Jacks r a killer. Phew. https://t.co/yGWePeW9S7

The Bollywood fraternity also wished the mini-SRK a very happy birthday, posting cute pictures of AbRam on their social media pages. Filmmaker and close friend of the family, Karan Johar was one of the first to wish AbRam happy birthday.

The most adorable child ….happy birthday my fellow Gemini…Abram!!!! ?????

Another close family friend was celebrity photographer Dabboo Ratnani, who also shared an adorable photo he took of a giggling AbRam in a casual white shirt and turn-ups:

It is thought that Dabboo and his family were also present at the four-year-old’s birthday bash over the weekend. 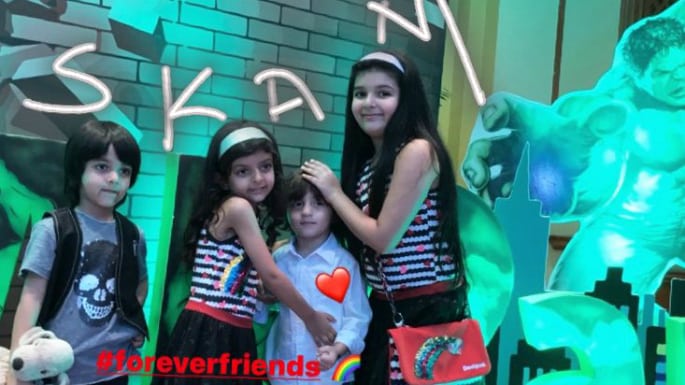 Dabboo’s wife, Manisha shared some snaps and videos of AbRam with her three children, Myrah, Kiara and Shivaan. In the picture, we can see that AbRam is quite the ladies man, with both of Ratnani’s daughters swooning over him.

Manisha added that Shivaan also shares a tight friendship with his “best bud” AbRam, and the two regularly play together:

AbRam’s older sister Suhana also recently turned 17. It is no secret that Suhana hopes to follow in her father’s acting footsteps one day and it seems that she already has the approval of the Bollywood fraternity.

“@iamsrk Mark my words #Suhanakhan is going to be a seriously good actor.Ive watched a short clip of her acting and it was terrific.Bless her.”

Shahrukh Khan responded to Shabana’s kind tweet by thanking her for the encouragement:

“How sweet are you to say that. & of course when u say it then it’s big encouragement for the little one. Thanks,” SRK tweeted.

Well, with all the attention and love that 4-year-old AbRam is getting – could he also be the next superstar of Bollywood alongside Suhana? We’ll have to wait and see!