All eyes were on Amitabh Bachchan and his family as they arrived at a luxury wedding in Mumbai. Abhishek and Aishwarya also attended the joyful day.

"They bring so many of us together for one cause to welcome the bride into the family."

Bollywood actor Amitabh Bachchan and his family made a wedding extra spectacular when they attended the celebration.

Located in Mumbai, the lavish wedding took place between 11-12th November 2017. Not only did Amitabh arrive, but so did his son Abhishek, daughter-in-law Aishwarya and little Aaradhya. Even his wife Jaya and their daughter Shweta Nanda were in attendance.

All six members of the Bachchan clan appeared in good spirits as they celebrated the happy occasion. Amitabh also shared several images with his fans on the following day.

He first shared an image of himself with Abhishek, Aishwarya and their four-year-old daughter. He captioned it with a beautiful message, saying:

“Family and a wedding .. they bring so many of us together for one cause to welcome the bride into the family.” 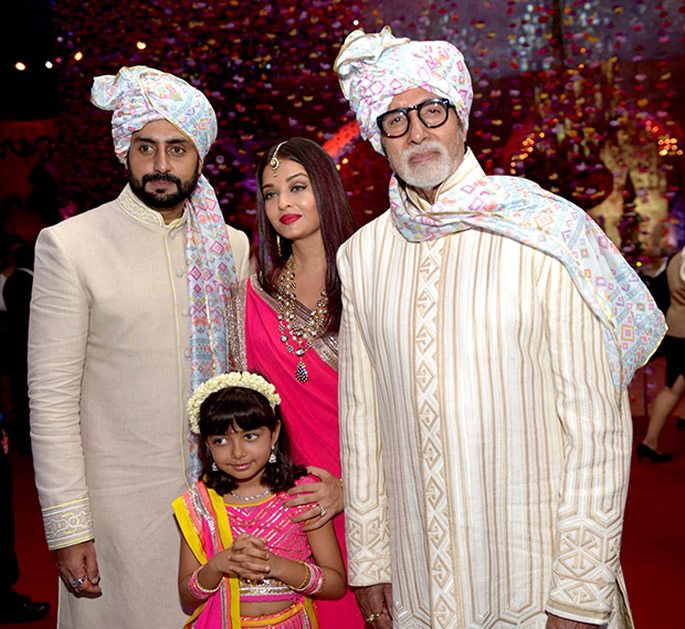 Both Amitabh and his son dressed in similar attire. They donned cream kurtas, with Amitabh’s containing brown, striped patterns.

However, doesn’t little Aaradhya look utterly adorable in her wedding outfit? She wore a sparkling, pink saree, embellished with silver, diagonal stripes. Her dupatta brightens our day with its hues of orange, pink and silver.

Wearing bejewelled earrings, the four-year-old also dons a tiara of yellow flowers. It seems she will follow her mother’s footsteps and become an impeccable fashionista. 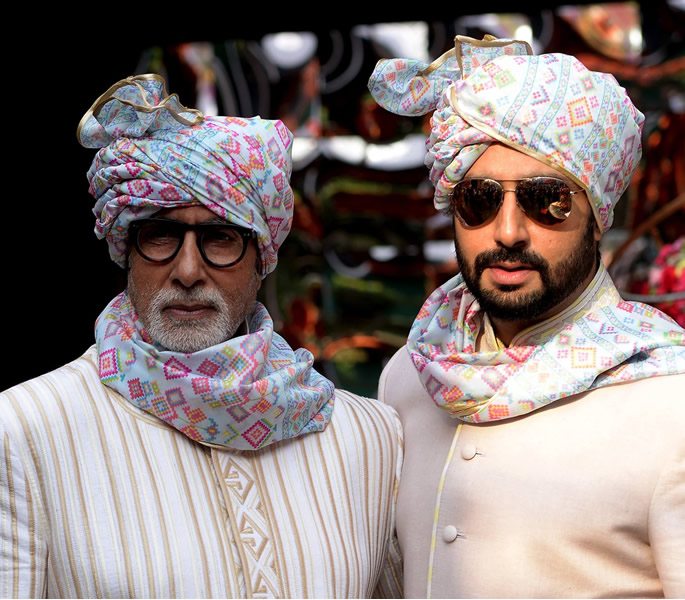 Throughout the event, many of the Bachchan family posed together for stunning pictures. Shweta Nanda also looked enchanting with her outfits for the occasion. As the family attended all the events for the wedding, Shweta first donned a regal lehenga.

A royal blue and gold creation, it depicted gorgeous patterns; befitting for a luxury wedding in Mumbai. She also wore elegant jewellery; dazzling earrings accompanied by a breath-taking pearl necklace. Both she and mother Jaya complemented each other with their blue-and-gold outfits.

The next day, Shweta changed into a stunning red saree, embellished with bright, colourful patterns. Posing together with her father, both Shweta and Amitabh appeared in excellent spirits, enjoying the celebrations. 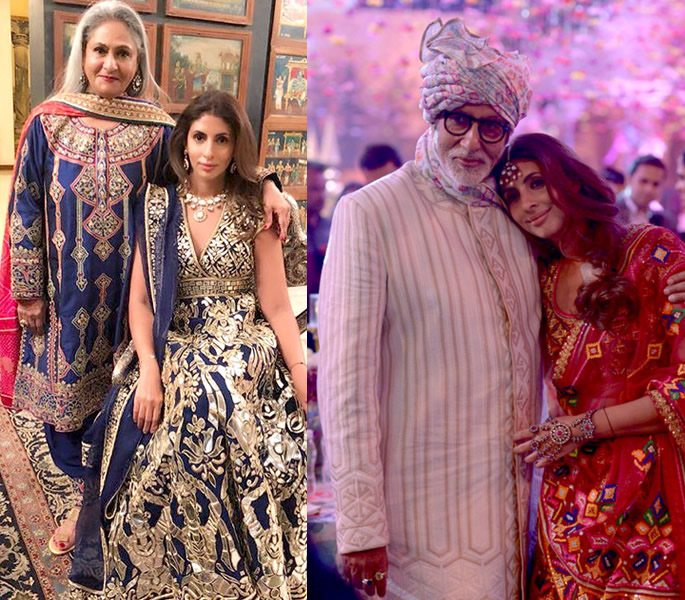 Abhishek also sported a similar outfit during the celebrations. While Aishwarya stunned in an enchanting red creation, Abhishek wore a blue-and-gold kurta, featuring regal embellishments across the fabric.

With gold detailing around the neckline, he certainly hailed as one of the best-dressed men. 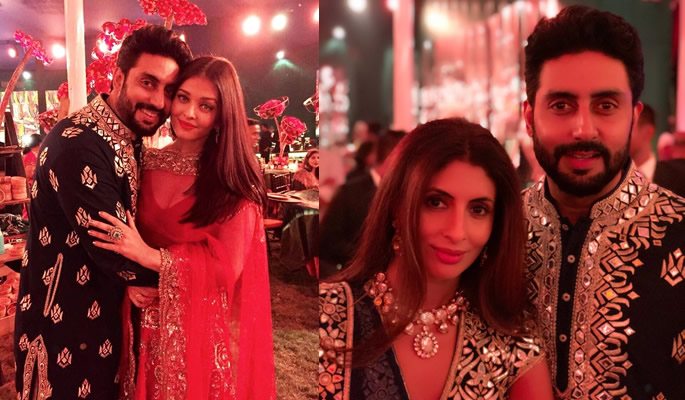 Amitabh also revealed the festivities of the wedding to his fans on his Tumblr blog. He began with a reflective approach to the subject of marriage, describing it as a “wonderful event in the family”.

It’s clear to see that Amitabh fully enjoyed the event, as his blog post creates emotions of warmth and happiness. He even commented on how every aspect of life is documented, as he greeted fans outside by the gates of Jalsa. 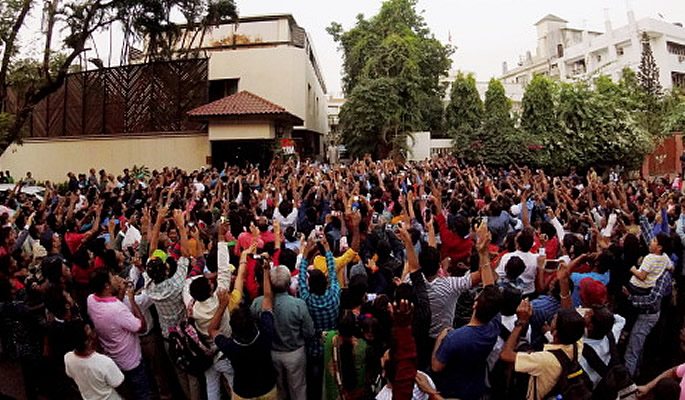 Images show a huge crowd gathering to catch a glimpse of Amitabh. Pleased to see his audience, the actor greets and waves to them with a big smile on his face. The fans responded by waving back or holding up their smartphones, eager to snap a picture or video.

From the large number appearing to see Amitabh, it shows they still revere him as an icon of Indian cinema. 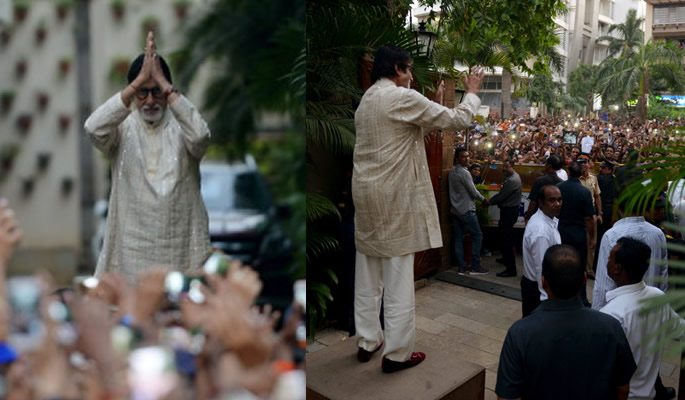 Overall, it appears the Bachchan family celebrated a lavish, enchanting wedding with loved ones. With these images, one can see the close bond these family members have with each other and why they are regarded as one of Bollywood’s most revered families.

In addition, one can appreciate Amitabh’s eagerness to show fans these personal images. While many stars would opt to shy their family life away from the spotlight, Amitabh chooses to keep a close link with his fans.

Once again, he shows us that he truly is a magnificent Bollywood icon!