The filming of Teen Patti in Cambridge brings together two of the biggest actors known in the East and West, Amitabh Bachchan and Sir Ben Kingsley

Its been a joy to work with Sir Ben

Bollywood legend, Amitabh Bachan and Oscar winning, Hollywood star, Sir Ben Kinglsey, have teamed together in Cambridge, UK, to shoot for Leena Yadav’s movie Teen Patti. The movie is a gambling thriller which has been inspired by the Hollywood film ’21.’

The trend of mixing Bollywood and Hollywood actors seems to be now becoming a popular formula for Bollywood movies.  Another recent movie is Kambakkht Ishq, which features Sylvester Stallone.

The majority of Teen Patti has been shot at Flame College, Lavale, Pune, India, and the scenes in Cambridge, are shot at St John’s College, Cambridge.

The film has been scripted by Shivkumar Subramaniam and Shabd director Leena Yadav. Leena said,“Sir Ben Kingsley is every director’s dream actor, with acting prowess honoured the world over.”

“In a sense, Teen Patti brings him back to the same land that made him a legend with Gandhi. I am thrilled to be directing two of the world’s finest acting talents, Sir Ben and Amitabh Bachchan,” Leena added.

In Teen Patti, Amitabh Bachchan plays a professor who teaches five of his best students in high-stake gambling. The students are  played by R. Madhavan, and newcomers Siddharth Kher, Dhruv Ganesh, Vaibhav Talwar, and Shraddha Kapoor.

The film is being produced by Serendipity Films, who continue to make world-class cinema, following the international sensation Being Cyrus. 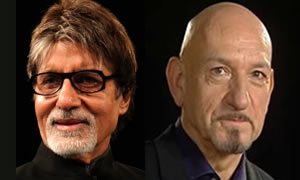 Producer Ambika Hinduja said, “Early on, the vision for Teen Patti was international and singular. Having followed Sir Ben’s work over the years it is my great honour and delight to have two stalwarts on the same platform. Few actors can match Mr. Bachchan’s talent, panache and his presence, and I believe that Sir Ben complements it all and more.”

Some key scenes were filmed in the casino called Aspinalls, which involved up to four cameras being used to film the scenes in a restricted space and very little room for error.

Amitabh said in his blog with regards to the filming  scenes with Ben Kingsley, “Its been a joy to work with Sir Ben. Generous and polite, prepared and competent and cooperative with every breath. It is no wonder then that we have finished what would have involved us all for several more days.”

There are reports that other Hollywood stars may also feature in the movie, including Richard Gere and ex-Bond, Pierce Brosnan. Amitabh has commented on this in his blog, he said, “There are some important names being mentioned for the shoot, but unless it all happens it would be premature to talk of them. Perhaps a little later when we are deep in progress on our work,” he wrote.

The last parts of the movie were filmed in central London and Amitabh commended the driving scene in London as being a very enjoyable part of the shoot. Especially, in the way the set was asssited by police and by the management.

Nazhat is an ambitious 'Desi' woman with interests in news and lifestyle. As a writer with a determined journalistic flair, she firmly believes in the motto "an investment in knowledge pays the best interest," by Benjamin Franklin.
Anil Kapoor joins American series ’24’
IIFA Awards 2009 Nominees