Amir Khan is back beating Barrera

After his shock defeat to Breidis Precott, Amir Khan comes back by beating Marc Antonio Barrera with speed, flair and maturity.

Freddie just changed me as a fighter

Amir Khan put his career on the line and won boxing legend Marco Antonio Barrera at the Men Arena in Manchester, UK, on Saturday night 14th March 2009. The comeback fight was crucial for Khan with him being victorious in the fifth round, when the fight was stopped due to excessive bleeding on Barrera’s upper left forehead.

It was about one minute into the fight in the first round when the heads of the two boxers clashed. This caused the cut on Barerra’s forehead which subsequently was hard to control as the fight progressed. Khan was not affected by his smaller cut below his left eyebrow. So, he took advantage and was too fast for Barrera, allowing him very little room to make any kind of significant comeback.

Khan looked different, his moves and style were now much more mature and his fight more balanced with defensive tactics and a game plan, all thanks to the new Hollywood coach Freddie Roach. Since the Prescott fight, when he was floored, Amir went under the wings of Roach and has emerged a different fighter with more discipline, calm and control.

Fighting in long red shorts, Amir made fast punches that had impact and were more better timed. The Mexican, Barerra in blue shorts, retaliated but could not get into the rhythm of the fight. Through the fight, Amir had his gloves up in defensive mode tainting Barerra and hitting him with speedy breaks. The blood seeping from Barerra’s forehead was simply to much for him to focus on his fight. That urge by Khan to knockout an opponent quickly showed at times but was now handled in a more responsible way with control and strength. 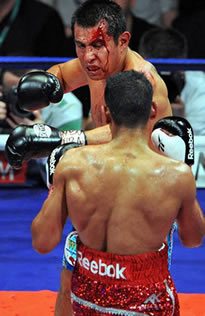 In the fourth round, the referee stopped the fight, for the ringside doctor to check the gash and talk to Barrera. Being the hard nosed Mexican boxer he is, Barrera wanted to carry on and launched a mini attack on Khan which did not make any difference to Khan to the end of the round. Barrera was immediately nursed again in his corner for the cut which was now open and flowing blood non-stop.

The fifth round started and Khan was ready to take Barrera out with punches flying at him with tremendous speeds. Barrera could not get any punches to match Khan’s speed and flow, and was struggling to find punches to rescue his fight. This was not the look of the fighter that beat Prince Naseem nine years ago. Khan had taken over the game plan that Barrera came with and was now edging him to the finish. To the point when, unusually, the fight was stopped again by the referee at 2 minutes and 36 seconds, for the doctor to talk to Barrera and withdraw him from the fight due to an unintentional and accidental cut. It was over and Amir Khan had won a boxing legend and was back.

This meant that according to the WBA and WBO the fight had to be settled by the scorecards in a technical decision. After five rounds of boxing, the scores awarded by the ringside judges were, John Coyle, 50/44; Terry O’Connor, 50/45 and Jose Martinez 50/45, all in favour of Amir Khan. Still making him the WBA and new WBO International Lightweight Champion. Amir now has won twenty fights and lost one 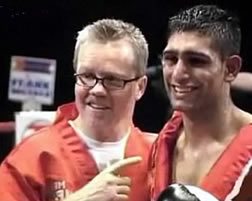 After the fight, Barrera needed 33 stitches to close the gash. Barrera said, “Khan never hurt me but he was too fast.” Amir said, “Today I proved everyone wrong. I know I got beat by Breidis Prescott but you know that was a mistake I made. I really say it’s a blessing in disguise what’s happend. Since then we moved to Freddie Roaches gym in the Wild Card and Freddie just changed me as a fighter. You can see the difference in me now than before.” Freddie has said that Khan is one of the fastest lightweight boxers he has come across and said on the night, “Amir made one or two mistakes when he dropped his hands. We’re not perfect yet but we’re getting there.”

Watch the video of Amir Khan versus Marc Antonio Barrera to see how Khan beat his opponent on the night.

Amir Khan has proved he is back on form with the aid of a new fitting trainer and determination to once again win every fight. So, now it is in the hands of promoter Frank Warren to plan Amir’s road to take a pop at the world title. There is talk that in the fights Warren lines up for Khan, one will include a rematch with Breidis Prescott.