Mohammed Nisar is a popular coach and owner of a snooker club. Nisar exclusively shares how he beat COVID-19 and the impact of the virus on his academy.

Snooker coach, Mohammed Nisar has successfully overcome COVID-19. His popular snooker academy is also strong enough and ready to face the most challenging times ahead.

His father Abdul Razaq worked in the maintenance department at the British Embassy. This was in Islamabad, Pakistan. His dad was given automatic British citizenship, after working five years at the Embassy.

His late mother Seema Jan was a housewife. Nisar was the eldest of four children, including two sisters and one brother.

From an early age, Mohammed Nisar began playing snooker across various leagues in his hometown, Oldham. His highest break on the snooker table is seventy-six.

Despite not taking the sport as a player, Nisar founded the Oldham Snooker Academy (OSA) in 1998.

Nisar who is known in the snooker circles has attracted many top players to the academy. This includes the likes of Mark Williams, Tony Drago, Stuart Bingham and Shaun Murphy. 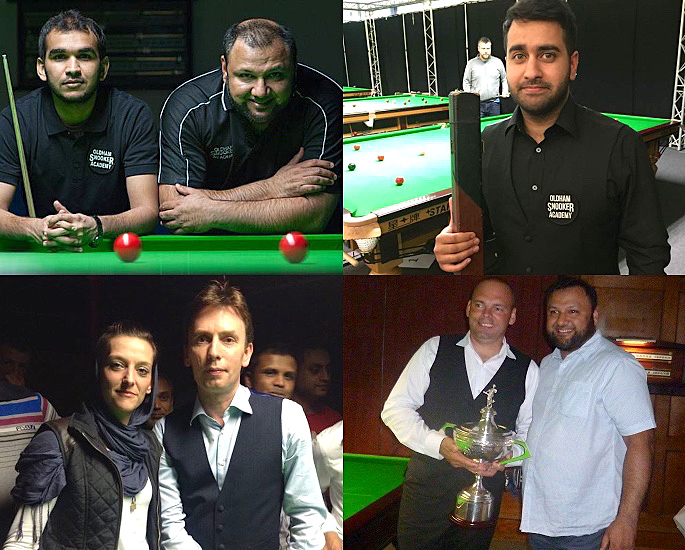 In 2009, moving into coaching, he completed a Del qualification. In 2018, he acquired a level 1 World Snooker Coach qualification.

Mohammed Nisar primarily coaches people from 12 and upwards. He has worked with the likes of Hamza Akbar (PAK), Farakh Ajaib (ENG) and Hammad Miah (ENG).

Mohammed Nisar exclusively shares his experience of having the COVID-19. He also reveals the impact of the virus on his snooker academy and coaching.

Having had the coronavirus, talk us through the different stages of it?

A couple of days after the government lockdown I noticed my body temperature just kept rising. I then developed a very strong fever.

My temperature was consistently over 39. It reminded me of the famous Pakistani saying, that he has a temperature of 102, which is not going down.

“My chest felt like a fireball both from the front and back – it was like a burning hot sensation. I had aches in my body too.”

I had a continuous dry loud cough, with breathing becoming really difficult. Some days it got really bad, whilst on others it was steady.

The peak of the virus lasted two weeks. However, I was in self-isolation for another seven days to be on the safe side. Hence, I had quarantined for a total of three weeks. 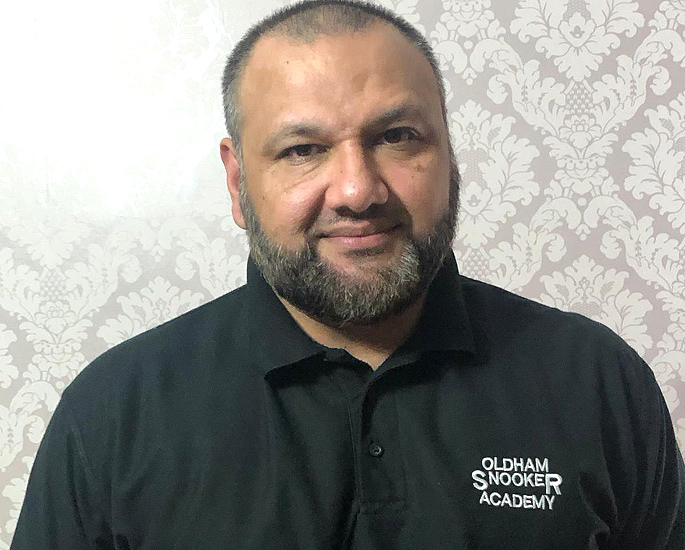 Can you describe what it felt like to have COVID-19?

I had several fears and emotions over the course of my three weeks in self-isolation.

My biggest fear was that I must not pass this virus to any member of my family. Therefore, I isolated myself immediately.

I began watching Sky News and earlier addresses of PM Boris Johnson where he was warning people not to go out and stay indoors.

Then suddenly the news of Boris catching coronavirus was a real shock. News also was coming in from Italy and Spain of the increasing number of fatalities.

The numbers in the UK began to increase, with almost a thousand deaths occurring every day. This was all very disturbing for me at the time.

“There were nights feeling would I wake up alive the next morning? But I was calmer when I began my road to recovery.”

How did you recover and what tips can you give to beat it?

With my fever and dry cough being persistently irritating, I had to look into remedies, medicines and entertainment to relief my pain.

As a remedy, I was frequently drinking green tea with fresh lemon and ginger. I also took paracetamol throughout, along with five days of Amoxicillin.

With time on my hand, I was glued to Netflix, Amazon Prime and YouTube. I was mainly watching movies, snooker classics, and travel vlogs.

I was hooked to young Pakistani traveller Abdul Wali, flying the world. Having travelled sixty–two countries, he uploads 10-15 minutes of daily coverage.

I have always had the travelling bug through snooker management and accompanying Pakistani snooker star Hamza Akbar across the UK. 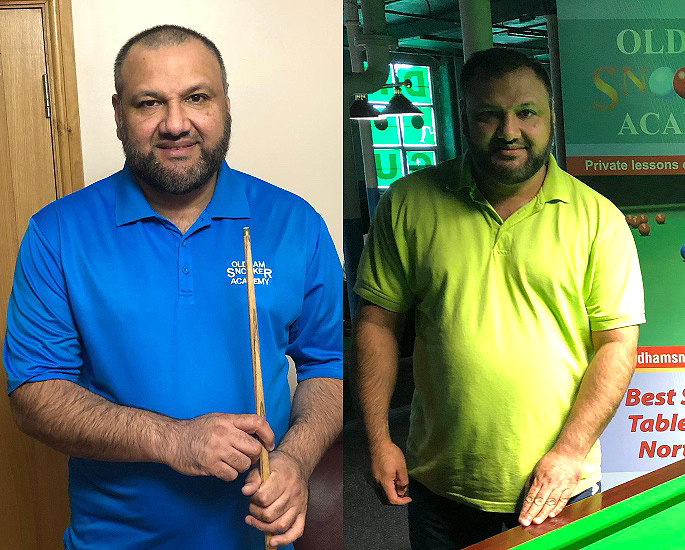 Tell us a little about your weight loss and after-effects of the illness?

During my three weeks of self-isolation with COVID-19, I was rapidly losing weight. I had lost 10 kg in total.

Naturally, I did not have the appetite to eat much when self-isolating. However, 7-9 days after coming out of self-isolation I began to eat well again.

I might have even put 1-2 kgs back on. In hindsight, the weight-loss is not such a bad thing during these tough testing times.

Initially, I was having extreme difficulty in walking, with a lot of weakness in my body. I am slowly going out a little bit and even went to my snooker club where some maintenance work was going on.

But overall the stamina does not seem to be there yet. I guess it is about taking each day as it comes.

“They say it can take up to seven weeks if not more to feel better and fully recover.”

What impact has COVID-19 had on OSA and your coaching?

The government’s nationwide lockdown on all indoor centres such as gyms, swimming pools, cinemas and snooker centres has been in place since March 23, 2019.

As a result, Oldham Snooker Academy (OSA) has remained closed. I have not been able to coach on the green baize throughout this time.

My home landline and mobile have constantly been ringing, with people enquiring when we will re-open?

We take things positively, believing that our regulars want to get back practicing and playing.

However, the real impact will be determined when there is no lockdown. But it also gives us time to find ways we can improve the business. 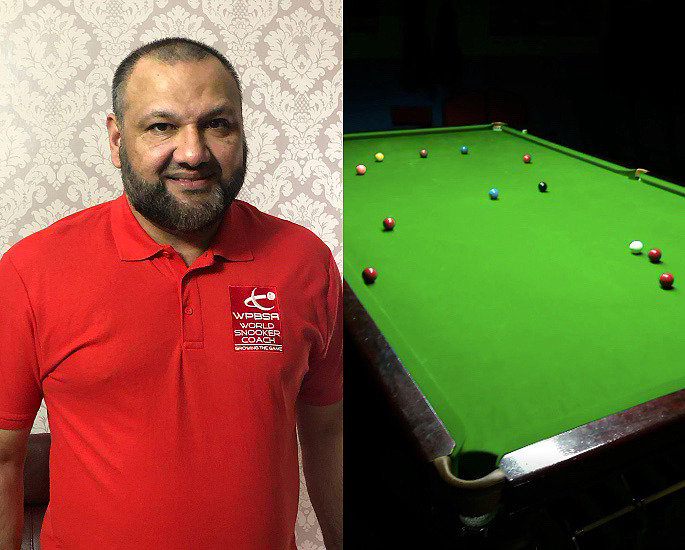 What are your alternative options to coach in the meantime?

Due to my illness, I have not been able to do any kind of alternative online coaching. With the exception of a few, most players have put their cues away because of no access to a snooker table.

As I am a Level 1 World Snooker coach, I have had many phone calls from snooker players and friends, for advice.

Whilst I am recuperating, I am still giving useful tips and closely following the professional snooker circuit.

I particularly, enjoying sharing my thoughts with players that I have been coaching. They too can learn a lot from the epic matches that are available to watch online.

If any creative ideas come to my mind, for alternative forms of coaching, I will definitely look into them.

“Being innovative is very important even when there is no lockdown.”

In the wake of COVID-19, what is the future like for OSA?

Whilst we live in uncertain times, there is always a ray of hope, with the future optimistically being bright.

Oldham Snooker Academy is no different to other clubs and organisations. We are raring to go once given the green signal.

We have a good reputation amongst players and the wider community, so hopefully, that will keep us going. We have provisions in place for the short and long term.

Like in the past, we hope to bring more snooker stars to exhibit their snooker at the academy. Any exhibitions are more likely to be from October 2020 and onwards.

After surviving, we aim to rebuild a thriving business model, as well as helping player development. 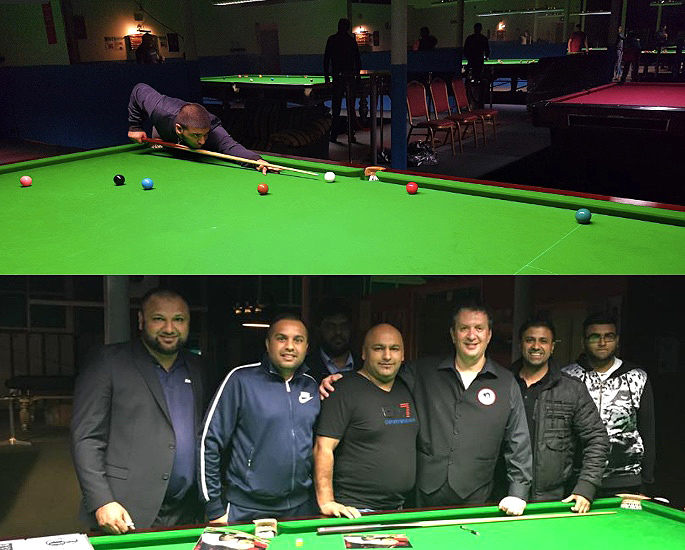 What would you say to anyone who is taking COVID-19 lightly?

My message to everyone is to take coronavirus very seriously. People are still getting infected, with the death toll in the UK continuously rising.

People going outdoors when they see the sunshine must adhere to the social distancing rules set by our government.

Do not be shy of wearing a mask and gloves. Life is very precious to us all. I know the feeling as I had a real scare. A real fright for my family.

“Hopefully, everything will be fine very soon as long as we are collectively sensible.”

Mohammed Nisar is a COVID-19 survivor who will inspire many people, especially in the snooker world.

Whilst there has been some impact on his snooker academy, he is confident moving forward.

Away from snooker, Mohammed Nisar enjoys spending time with his family. He is married and has four children, including an elder son and three daughters.