Pakistani Snooker player Hamza Akbar has had many ups and downs in the game. DESIblitz met the gifted cueist who is determined to come back strongly.

"People come to England to make money, but it seems I have come to spend it all.”

Hamza Akbar is a snooker player from Pakistan who has ambitions to succeed in the game.

From growing up in Faisalabad to addressing his anger issues, he went onto becoming National Champion twice.

The lion-hearted Hamza burst onto the scene after claiming a gold medal at the 2015 Asian Games.

Despite facing so many hardships and struggles on the main professional tour, along with visa issues, Hamza wants to become a stronger player.

To achieve his goal, he needs to gain credible financial support and have a full-time coach.

Let’s take a closer look at the life of Hamza Akbar, along with his snooker story, achievements and future: 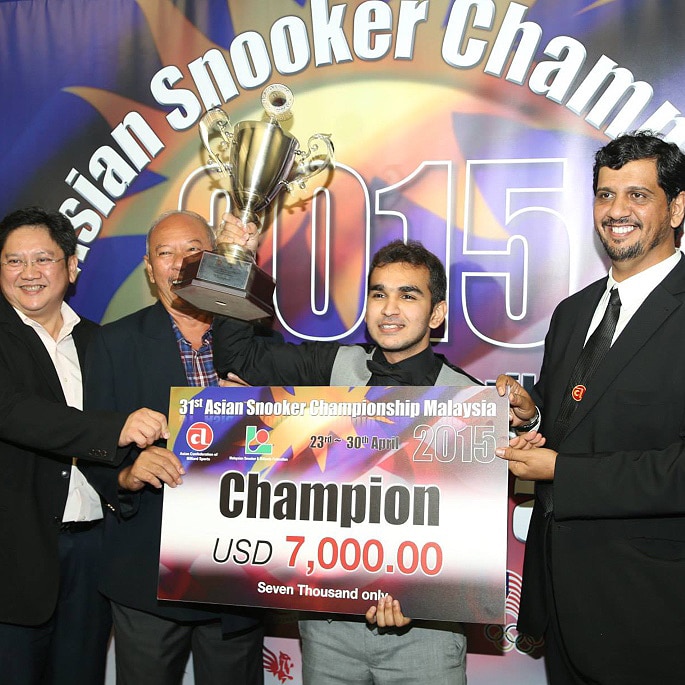 Hamza belongs to Faisalabad, which is the third largest city of Pakistan. Hamza has three brothers, two elder to him, along with two sisters.

His mum, dad and paternal grandmother all live together in their family home. As a youngster, Hamza was a little naughty. He would often cause trouble and then hide in the washroom, locking the door.

“I have done every naughty thing that one can imagine. If my family beat me, I would smash the plates in the house. I would go upstairs and throw the plates from there.”

Prior to 2007, Hamza had a lot of anger in him. But after he started playing snooker and joining a club he did get a grip on his emotions, gradually becoming calmer.

Hamza began playing snooker from an early age, with his father keeping a small billiard table in the house. With the height of the table being very small, he would use a small stool to play.

Then during break time at school or whenever he had a half day, Hamza would go to play snooker at a local club.

At the time, his parents were not happy about him playing the game. But through the passage of time, they became more accepting with more awareness.

It was in 2008 that Hamza got serious about the game as he began beating everyone at his local club.

Recognising his talent, an owner of a Faisalabad club felt he should receive proper coaching. He took him to Sargodha for training under coach Bilal Mughal. 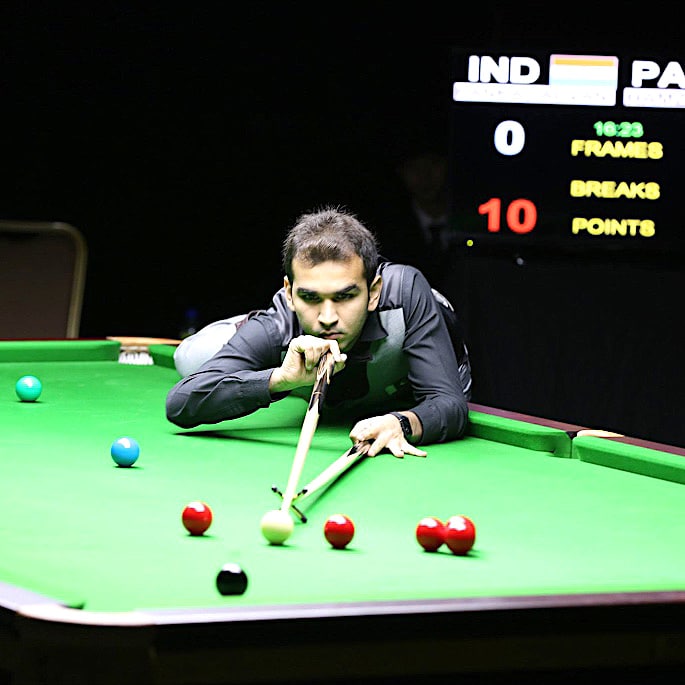 In 2009, he qualified for the Amateur Under-21 World Championships for the first time. He became champion of the Under-21 Punjab Cup, which is a difficult tournament to win. He was twice triumphant in this tournament.

He became the youngest National Champion in 2013. After being runner up in 2014 to Muhammed Asif (PAK), he reclaimed the title in 2015, defeating Shahram Changezi (8-4) in the final.

His first major global title game at the 2015 Asian Games, claiming a gold medal after defeating Pankaj Advani 7-6 in the final. He was only 22-years old when he accomplished this amazing feat.

His highest break at the amateur level is 141. He has achieved a 147 in practice, but not yet in a competitive match.

In reply to a question of how he was feeling when making the 147, Hamza said:

“There is a lot of pressure. When you get to the last few balls, there is serious pressure then.”

Since earning a two-year card on the main snooker world tour, Hamza has found it difficult to string together a few results.

“When you come on the professional circuit then no match is easy. It is a 128 player circuit. I did draw players from the top 16.

“To win those games you need to have 99.9 per cent pot average to beat them.”

Amongst them, there are champions who have won multiple titles, including Neil Robertson (AUS), Mark Selby (ENG) and Mark Williams (WAL).

His best ranking finish in tournaments is the last 32 at the 2018 Snooker Shoot-Out, 2018 Northern Ireland Open and 2019 Gibraltar Open.

His highest break as a professional snooker player is 135, which came during a qualifying match for the 2019 Indian Open. 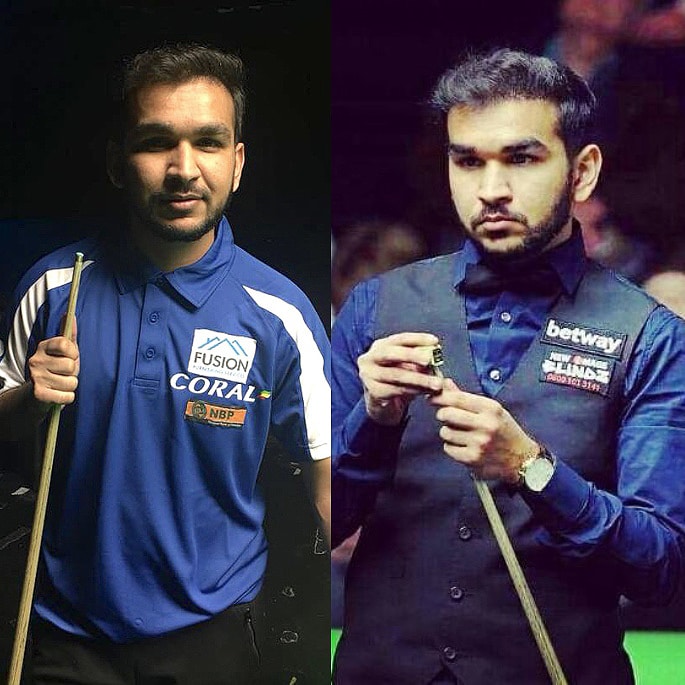 Another core reason for Hamza not being able to show consistency was his mental state. He required a good coach, which he was unable to afford. As a result, he has struggled on the pro-circuit. Hamza mentions:

“I am still working on my mind. I am still trying to work how I can overcome the negative thoughts I get during a match.”

Only ex-pro Mitchell Mann and Nasir from Midlands Snooker Academy have helped him, particularly with his technique.

The feedback he has had from them is that his body language reflects the outcome of his matches.

When he walks around the table, he seems to be in a state of confusion. These are areas where he needs to improve his game.

Lack of support in terms of sponsorship is another reason why he has not been able to produce the results on the green table. He has had to put money from his own pocket, using up all his savings.

Talking of this he expresses:

“People come to England to make money, but it seems I have come to spend it all.”

His manager Mohammad Nisar has been a big pillar of support since Hamza came to the UK.

Ever since becoming a pro, Hamza has had so many visa issues, losing potential ranking points and prize money as a result.

According to Hamz,a, this is because he has a Pakistani passport and is a national from there.

“I remember in 2016 or 2017 when I went to play in Gibraltar, special agency people took me into another room and questioned me because I had a Pakistani Passport.

“I then told them, type my name in google as I am representing Pakistan.

“After checking me online they let me on board the flight with only twenty minutes left.”

Hamza is adamant that no one from the Pakistani government is supporting him. Hence, why he has faced more struggle on the main snooker tour in comparison to players from other nations.

Every time, there is a tournament overseas he has to travel from England to Pakistan. After collating documents he has to apply for a visa. According to Hamza, the Pakistan Snooker Federation (PSF) do help him, but very little.

He does not receive the same level of support that Pakistan cricketers enjoy. Even a new regime led by Imran Khan has made no difference. In 2019, his visa for India was refused also.

When missing tournaments he feels like packing up everything and going back to Pakistan.

Though Hamza admits he cannot keep making excuses for his performances on the table due to all the hardships he has had to confront. 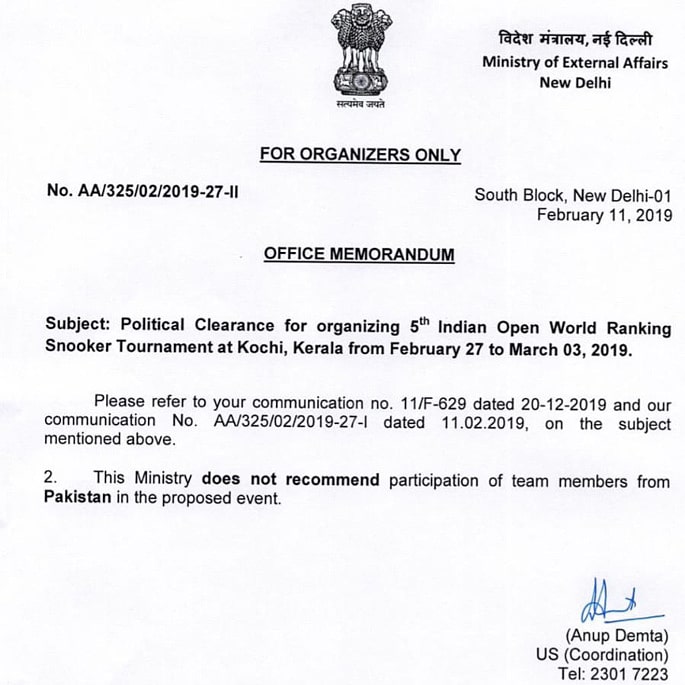 Hamza wants to have stable future on the main snooker tour. By qualifying and staying in the top sixty-four, he will avoid having to go back down the difficult Q-School route.

Previously you could qualify for the main tour through PTC Asian or the IBSF.

Whilst he keeps on top of his form, Hamza will represent Pakistan in the World Cup team event.

He will also play matches in Pakistan subject to invitation. His local fans do want to see him play there.

Let’s hope the business community and the government of Pakistan will support his cause in the future. For sponsorship enquiries please contact his manager Mohammed Nisar here.

Hamza Akbar is optimistic that he will become strong like a lion after all this struggle, hopefully winning more titles for Pakistan.

He still has the support of his family. He may feel like a loser in the short term, but with a little more perseverance, he may eventually become a winner.