Pakistani snooker player, Muhammad Ikram hasn’t allowed the fact that he was born without arms to hinder him from playing the game of snooker.

Muhammad Ikram, a Pakistani snooker player who was born without arms has mastered the sport leaving spectators in a state of shock.

With a flick of his chin, Muhammad Ikram strikes the cue ball and perfectly aims a red into the corner pocket.

Ikram, 32, successfully pursued his passion for what may have seemed an impossible sport for him.

Having spent years honing his skills, the Pakistani snooker player can now take on anyone at his local snooker hall.

Ikram, from Samundri in Pakistan’s eastern province of Punjab, spoke to AFP during a recent visit to the snooker hall. He said:

‘’It is a tough job that requires hard work. If there is a player like me, I am ready to face him.’’ 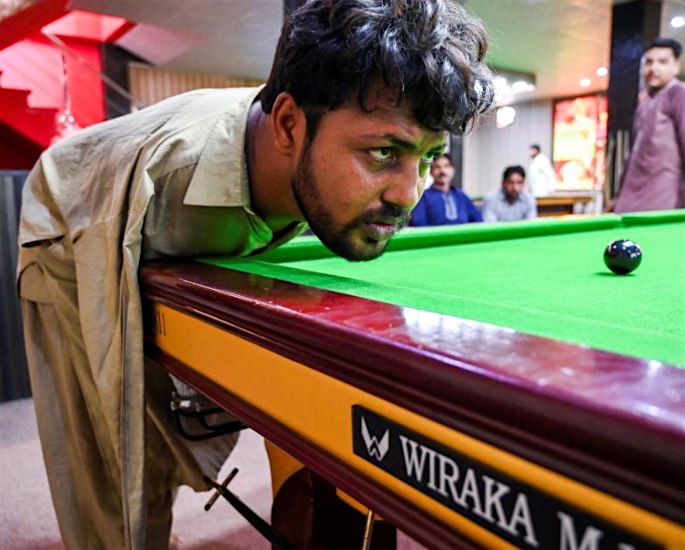 Unfortunately, Muhammad Ikram spent his childhood feeling isolated. He is one of nine children, all of who did not go to school as they were born into a poor family.

During his teenage years, Ikram began watching players at the local snooker hall. This inspired him to start practising ‘’in secret.’’ He explained:

‘’In the beginning, I used to push the balls by myself on an empty pool table. Gradually, I improved my game and started playing with others.’’

Ikram’s time spent practising and his zest for the game has led him to challenge some of the best players in his community.

The Pakistani snooker player has showcased phenomenal shots on the snooker table.

Using his chin to hit the cue ball, Muhammad Ikram has pocketed reds and then colours to the applause of fellow snooker players.

After having eventually missed a shot, one player said, ‘’Chalk your chin.’’

However, Muhammad Ikram was initially banned for several years from playing the sport by his worried parents. They feared he would injure himself.

Eventually, in 2019, his parents allowed him to return to the sport.

Undoubtedly, his unique set of skills have turned Muhammad Ikram into an online celebrity amongst the members of the snooker fraternity.

Despite not knowing what social media is, Muhammad Ikram states, ‘’I become famous.’’

Although cricket is Pakistan’s leading sport, snooker is also loved by fans across the nation. 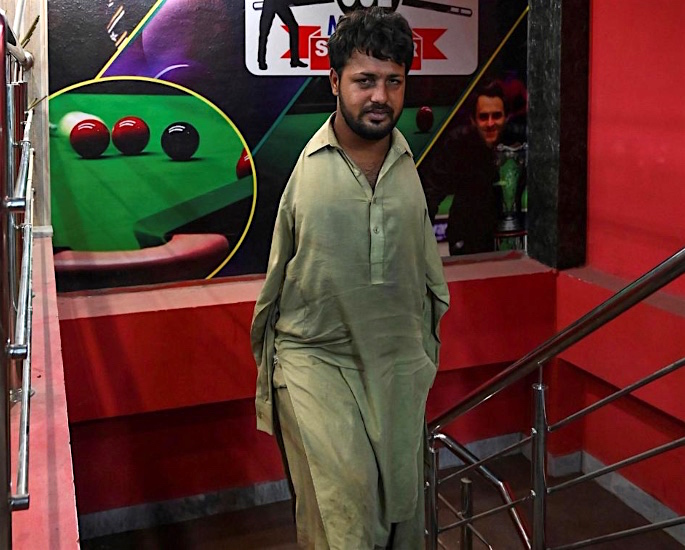 Interestingly, Muhammad Ali Jinnah, the founder of Pakistan was a keen player of the sport. It was introduced by British officers during the colonisation of the Indian subcontinent.

The owner of the Samundri Snooker Hall, Muhammad Nadeem described Ikram as a ‘’true sportsman.’’

‘’We don’t charge him for a game. Instead, people pay him to play with them. He has no competition, in cricket and football there are disabled players but when it comes to snooker he is a one-of-a-kind player.’’

Despite no up-to-date statistics concerning people with disabilities in Pakistan, it is estimated over 30 million people in a country of 220 million are disabled.

As well as this estimate by non-governmental organisations, there is a lack of social safety for people with disabilities.

As a result of this, many disabled people in Pakistan are forced to stay home.

Ayesha is an English graduate with an aesthetic eye. Her fascination lies in sports, fashion and beauty. Also, she does not shy away from controversial subjects. Her motto is: “no two days are the same, that is what makes life worth living.”
Female Commentator slams Troll over ‘High Heels’ Comment
Pakistani Man training to be World’s Tallest Cricketer at 7ft 6ins