Indo-Chinese food is known for its intense flavours and it is highly enjoyed in India. Here are seven delicious recipes to try out.

it is a balance of sweetness and spiciness

Fusion foods are enjoyed in India but one of the most popular cuisines is Indo-Chinese.

Indo-Chinese cuisine is the adaptation of Chinese cooking techniques and seasonings to appeal to Indian tastes as well as offering vegetarian dishes to appeal to much of the population.

It is said that the cuisine was developed by the small Chinese community that has resided in Kolkata for over a century. Today it is a major part within the country’s food scene.

Indo-Chinese food is available in major Indian cities, served in restaurants and at roadside food stalls.

Dishes are packed with spices to create a mixture of hot, sweet and sour flavours. Some of the most popular dishes include Szechuan chicken and Hakka noodles.

The popularity is so vast that Indo-Chinese cuisine is enjoyed in western countries as well as the Middle East. 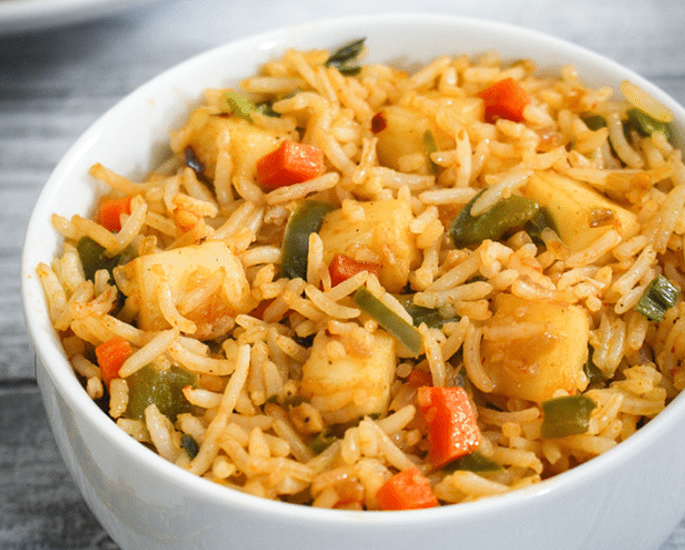 Fried rice dishes are some of the most popular Indo-Chinese meals because they are simple and versatile.

While almost any ingredient can be added, this particular recipe is made with paneer.

This dish offers a range of textures, from the fluffy rice and soft paneer to the slight crunch of the vegetables. Complete with a mixture of spices, this recipe provides a filling and wonderful meal. 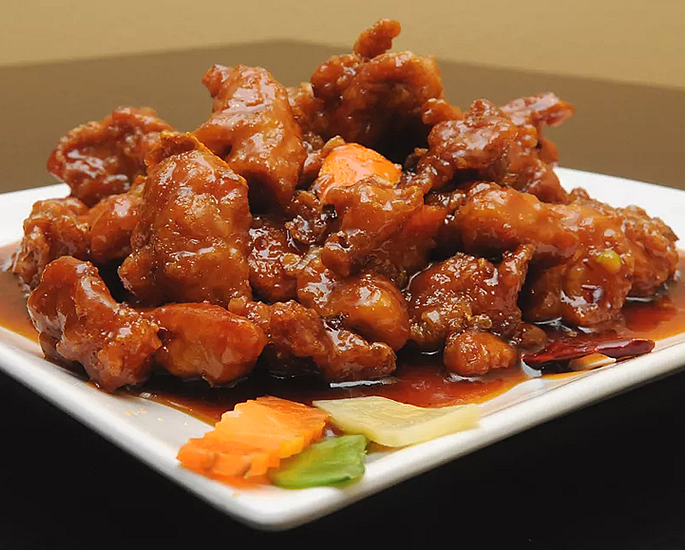 Szechuan chicken is a classic dish within Indo-Chinese cooking and it is a balance of sweetness and spiciness combined into one savoury dish.

This particular recipe uses pre-made Szechuan sauce that can be stored for future use.

Szechuan chicken can be eaten as a main meal or as an appetiser.

As a meal, it tastes great when served with fried rice or noodles. If you prefer to have it as a starter, just omit the gravy. 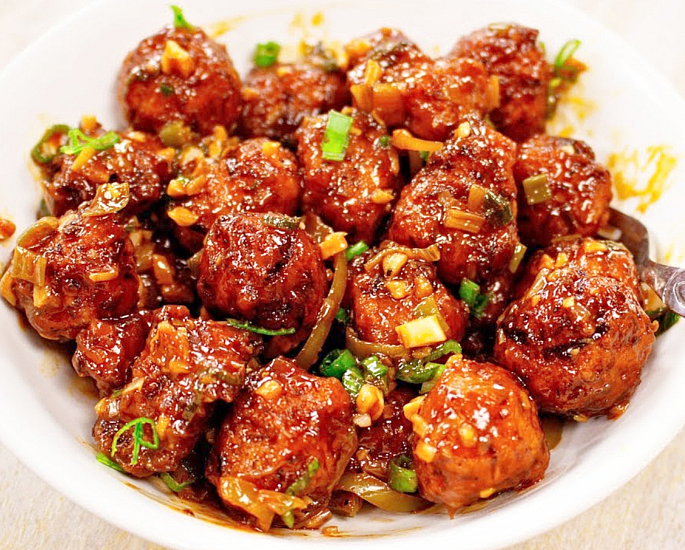 Vegetable Manchurian is one of the most popular Indo-Chinese dishes and is made of deep-fried mixed vegetable dumplings tossed in Chinese sauces.

The combination of delicious vegetables flavoured with an array of spices is one to make and try.

The crispy vegetable balls absorb the flavours of the sauce but the outside manages to stay crisp enough for an added bite.

It is a dish which can be enjoyed as a light snack or can be served alongside noodle or fried rice dishes.

For the Manchurian Sauce 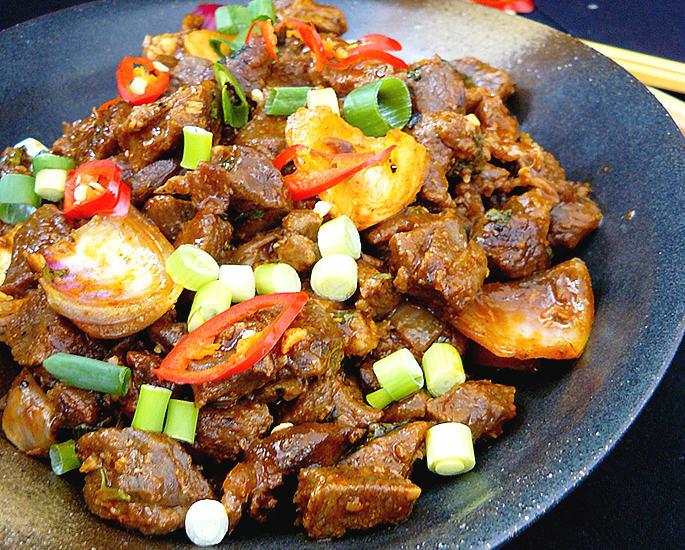 Indo-Chinese lamb fry is a dish which requires just a handful of ingredients but offers a lot of intense flavours.

The dish is full of flavours that are well known within Indian and Chinese cuisine.

This recipe is made with lamb but chicken or pork are a delicious substitute. For vegetarians, mushrooms or tofu are ideal.

This recipe was adapted from The Spice Adventures. 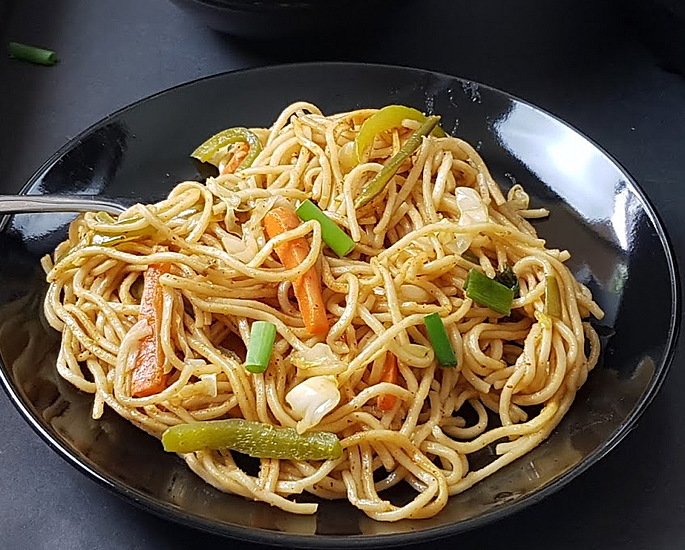 Hakka noodles are the roadside version of the popular chow mein in India. The dish is typically spicy and full of vegetables.

Although any type of noodle can be used, some work better than others. Egg-based medium noodles are ideal if you want to recreate an authentic dish.

When it comes to vegetables, it is best to use traditional vegetables like peppers and carrots as they will give the dish an extra crunch. 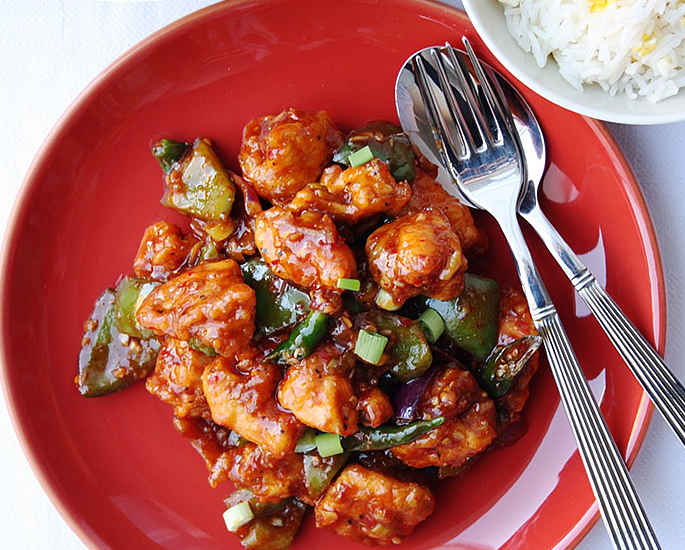 One Indo-Chinese dish that is known for its intense heat is chilli chicken. It is pieces of chicken coated in a batter and fried until crisp.

The delicious fried chicken is then stirred into a sauce that is packed with chilli and garlic.

The full potential of this dish can only be achieved if chicken thighs are used. The meat is more succulent and is less prone to drying out compared to other cuts. 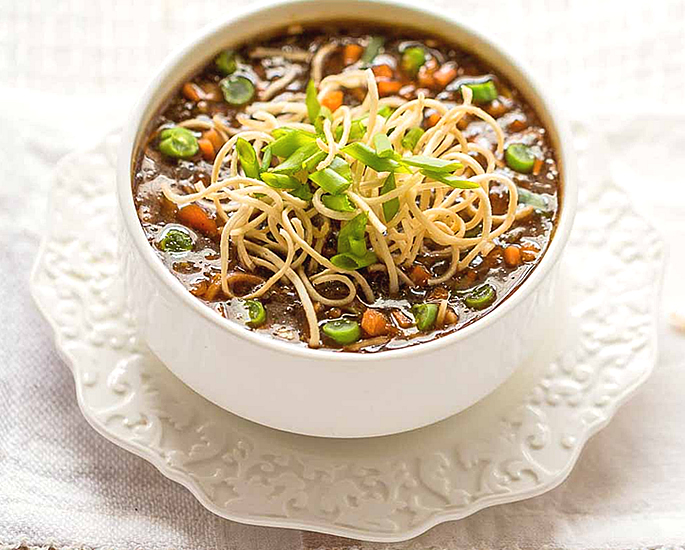 It is prepared using a variety of vegetables which soak up the flavours from the broth. Deep-fried noodles give the soup texture and an added bite.

This particular recipe is made with cabbage, carrot, onions and peppers.

This recipe was adapted from Hebbar’s Kitchen.

Indo-Chinese cuisine offers something different to the people of India in terms of flavour but the taste is delicious and it is one of the main reasons why it is so popular in the country.

Whether it is in a restaurant or served at a roadside stall, Indo-Chinese food has the right balance of Indian and Chinese ingredients in order to create a unique combination of flavours.

The best part about these recipes is the fact that many of the ingredients can be substituted for other ones depending on personal preference.

With these step-by-step guides, you will be able to create wonderful Indo-Chinese meals which are filling and have a plethora of bold flavours.

Images courtesy of Spice up the Curry, The Spruce Eats, The Spice Adventures and Maunika Gowardhan