12 Delhi Street Foods which are Popular

Delhi street foods have a range of delicious flavours which is what keep bringing back food lovers. We explore 12 popular dishes in more detail.

The tanginess comes from the tomatoes and dry mango powder.

India has a wide variety of street food and Delhi street foods are some of the most diverse.

Many locals get their food from stalls as they are cheap, readily available and are full of flavour.

Not only do they feed the community but as there are so many street food stalls, they also provide employment and help grow the economy.

Some dishes have become so well-known, they have become synonymous with the region. For example, daulat ki chaat is considered to be one of Delhi’s main street foods.

Other street foods may have originated in other parts of India but its popularity saw it make its way to Delhi.

Street food, in general, has become very popular due to the short span of time between making the order and getting it.

Delhi’s street food scene is a sight to behold. Vendors are everywhere and the smell of fresh food fills your nostrils.

With so many well-known dishes available, we look at 12 Delhi street foods in more detail. 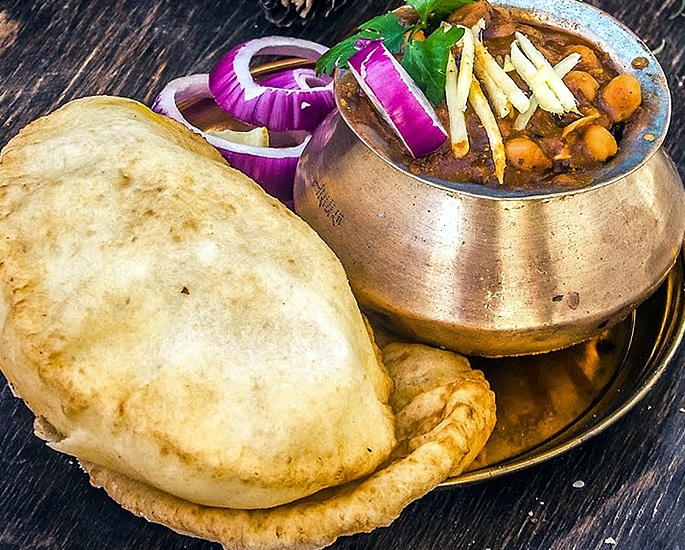 Chole bhature may come from the Punjab region of India but it is one of the most popular Delhi street foods.

It can be eaten at any time of the day but it is often enjoyed as a breakfast dish and it is sometimes accompanied by lassi.

Chole bhature is a combination of white chickpeas cooked in a spicy sauce and bhatura, a fried bread made from maida flour.

The result is a light, crispy bread which is dipped into intensely spiced chickpeas. It is a mixture of textures as the chickpeas are soft, yet they keep their shape and the bread has a slight bite to it.

The streets of Delhi are renowned for serving delicious chole bhatura and it can be eaten with sweet or spicy chutney. 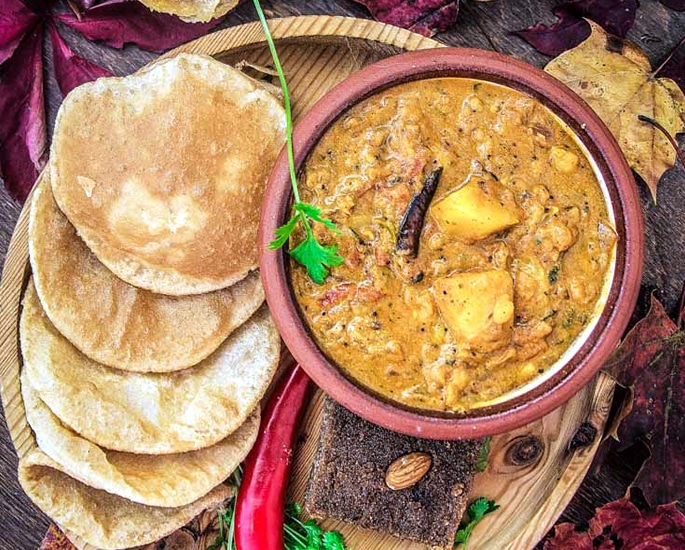 Puri aloo is very popular in Delhi but it is also enjoyed in Punjab as a breakfast dish.

To make the dish, boiled potatoes and tomato puree are the two main ingredients when making the curry. When cooking, it is flavoured with various spices.

It is eaten with puri, which is made with wholewheat flour and then deep-fried.

The slightly crispy puri is dipped into the curry, soaking up the spicy and tangy sauce. The tanginess comes from the tomatoes and dry mango powder.

This is a spicy and delectable dish in Delhi which is available at most food stalls. 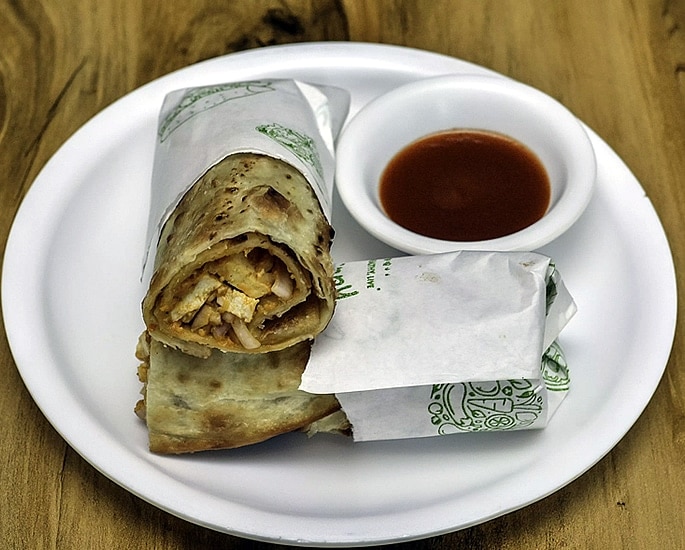 Lababdar rolls may be popular in Delhi but they are also a much-loved street food in various regions of India.

It is basically a curry rolled in a roti to become an ideal street food item.

Food lovers will have different experiences when trying the food as each vendor puts their own spin on it.

Onions and a mixture of spices are cooked in a spicy tomato gravy. Cream is sometimes added for a richer texture. They are then stuffed into the roti and rolled.

One of the most popular variations is made with paneer as it creates the perfect balance of flavours. The mild cheese contrasts perfectly with the intense spices.

It is also popular in Punjab where it is commonly served in an aloo or onion paratha along with a glass of sweet lassi. 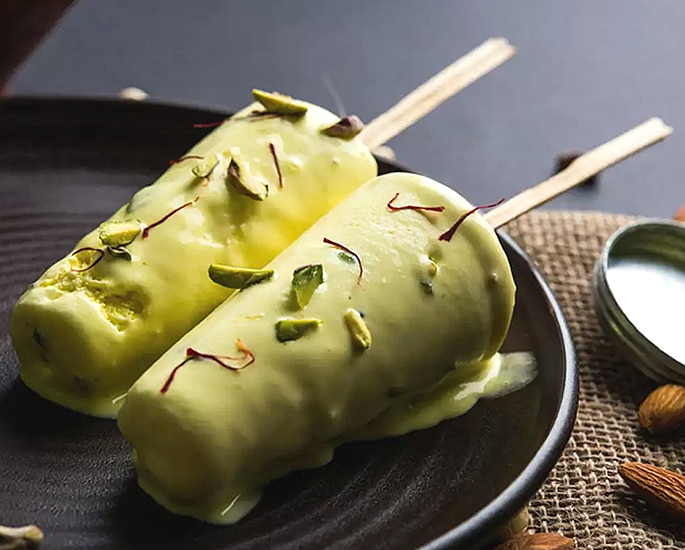 Kulfi is one of the most refreshing and popular Indian desserts so it is no surprise that it is a much-loved Delhi street food.

It is loved all over India thanks to its silky smooth texture.

There are a plethora of flavours to choose from. Some of the most popular variations include mango and pistachio.

Kulfi is made by simmering milk for hours before leaving it to cool completely. It may be time-consuming but it does not stop it from being enjoyed by the masses.

It is one of the most popular Delhi street foods because it serves as a cooling remedy to India’s mostly hot climate.

While it is a part of most street food menus, more people are making it at home because it only uses four ingredients. 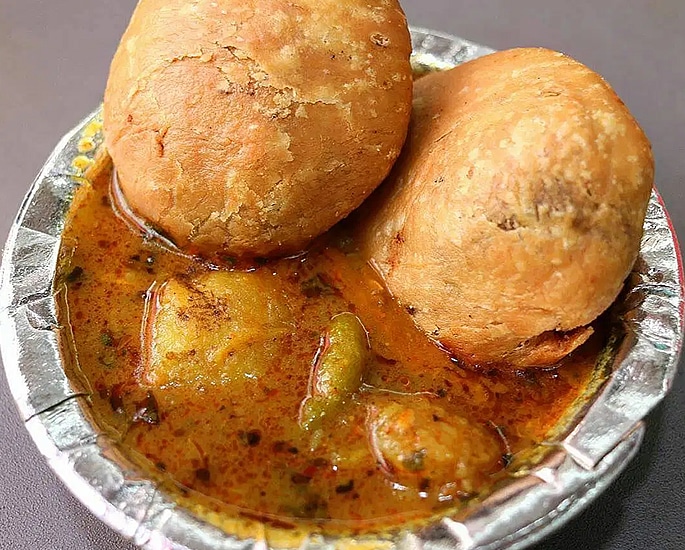 Kachori with sabzi is popular throughout India but there are different variations from region to region. In Delhi, it is usually served as chaat.

Originating in Uttar Pradesh, this street food favourite is a round flattened ball which is stuffed with a baked mixture of urad dal or yellow moong dal.

Spices are added to the mixture and it is then deep-fried. The finished kachoris have a crispy exterior and the inside is soft and spicy.

It is served with sabzi (vegetable curry). Usually, it is eaten with potato curry and when the kachori is dipped into the sauce, it absorbs even more flavour.

When eaten together, the intense spices will result in teary eyes but it is what makes this dish so enjoyable in Delhi. Fresh coriander and chillies garnish the simple, yet flavourful street food. 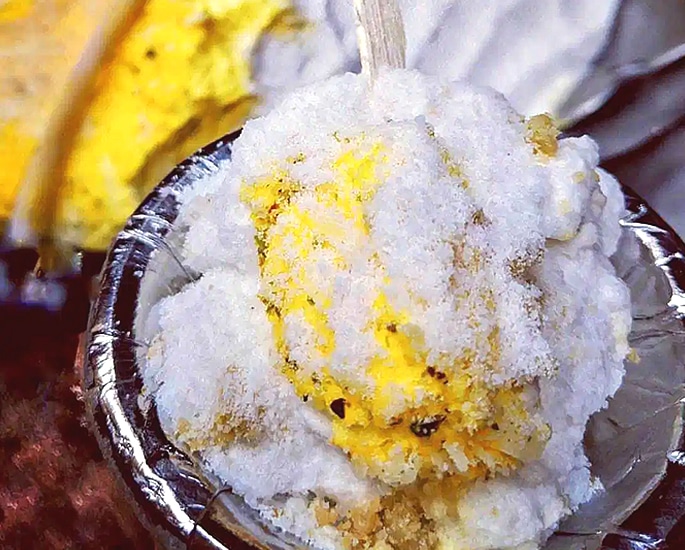 One of the most popular Delhi street foods is daulat ki chaat but it is also one of the most difficult to find. It is only found in Chandni Chowk.

It is an extremely light dessert with a pillowy texture and the long process is what people appreciate.

The long process is one of the reasons why many vendors create alternate variations as NDTV reported.

Daulat ki chaat typically takes one day to prepare. Fresh buffalo milk is mixed with cream and then cooled on an ice slab overnight.

Gallons of sweetened milk is then whisked by hand until frothy. The milk is mixed with khoya and whisked until soft peaks can be formed.

It is then topped with sugar, mixed nuts and silver leaf.

Vendors have to sell it quickly otherwise it collapses and turns into a milky puddle. It may not be widely available but it is an experience to savour when in Chandni Chowk, Delhi. 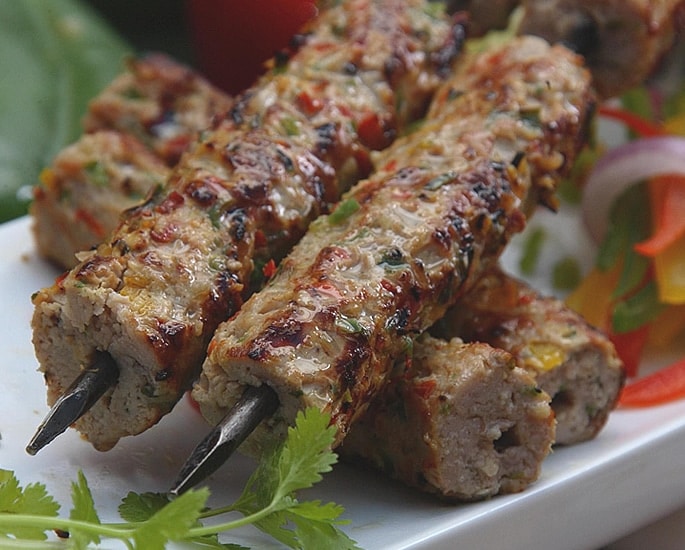 While Delhi is famous for its vegetarian street foods, there are some delicious non-vegetarian options and kebabs are some of the most popular.

India was introduced to kebabs through Mughal cuisine. They quickly spread throughout the country to become one of the most popular meat dishes available.

Lamb and mutton kebabs are the most common in Delhi and they have been marinated in various spices and skewered.

The meat is then cooked on a grill which only adds to the delicious taste. The result is tender and moist pieces of meat that are filled with a plethora of flavour.

Kebabs are usually served with various fried vegetables which have also been cooked on a grill.

The best kebabs in Delhi can be found in Tilak Nagar. The air is filled with the aroma of the kebabs which attract people like a magnet. 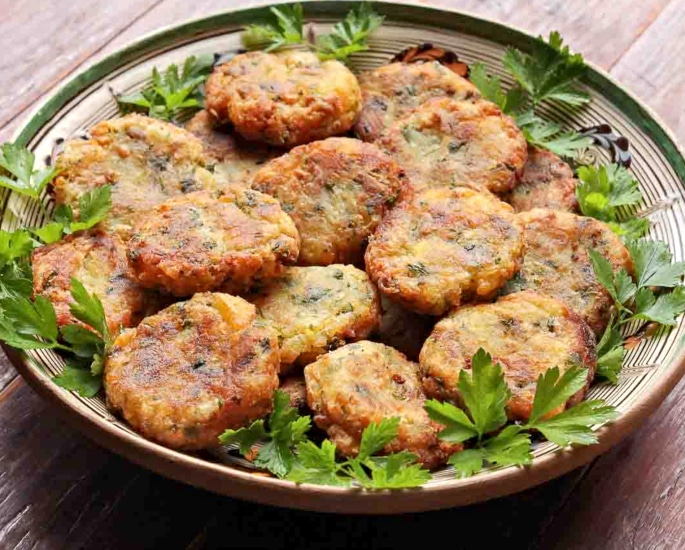 Aloo tikki is a famous food on the streets of Delhi and when people eat it, they cannot forget the wide spectrum of flavours and textures within every mouthful.

It is a simple potato-based snack which is enjoyed throughout India, let alone Delhi.

They are typically made using potatoes, peas and several spices to create a tasty snack. They are usually shaped into circles and fried.

When they are fried, there is an array of textures as the potato is crisp on the outside while the inside remains soft and fluffy.

Some street food vendors serve it on its own while others stuff it into a bun to create an aloo tikki burger. 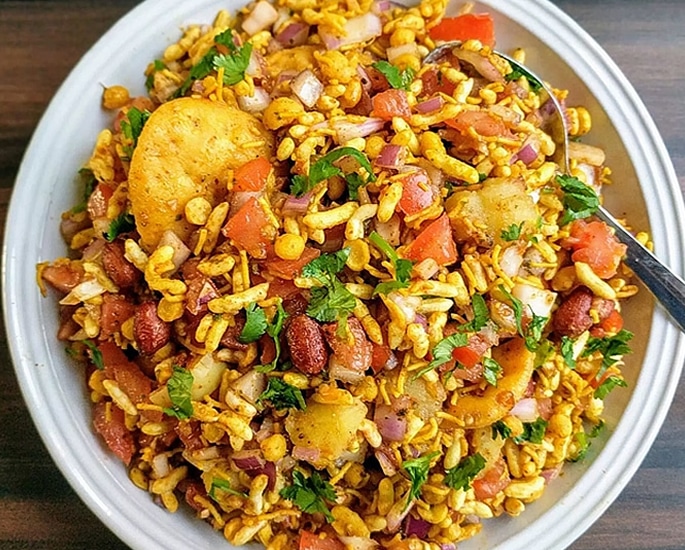 Bhelpuri is believed to have originated in Mumbai but it has a special place on the streets of Delhi.

It is a type of chaat usually made from puffed rice, mixed vegetables, chutney and other fried snacks.

It has a balance of sweet, salty, tart and spicy flavours and it is this blend what attracts so many people. Not only is there an array of flavours but the textures also range, including crispiness from the puffed rice and fried sev.

People have put their own spin on the snack. From being made with yoghurt to having roasted nuts, there are so many ways to enjoy the snack.

Bhelpuri can also be served in many ways. Traditionally, it is served on a plate but street food vendors serve it paper which has been folded into a cone.

In terms of popular street foods in Delhi, bhelpuri is one of the most versatile. 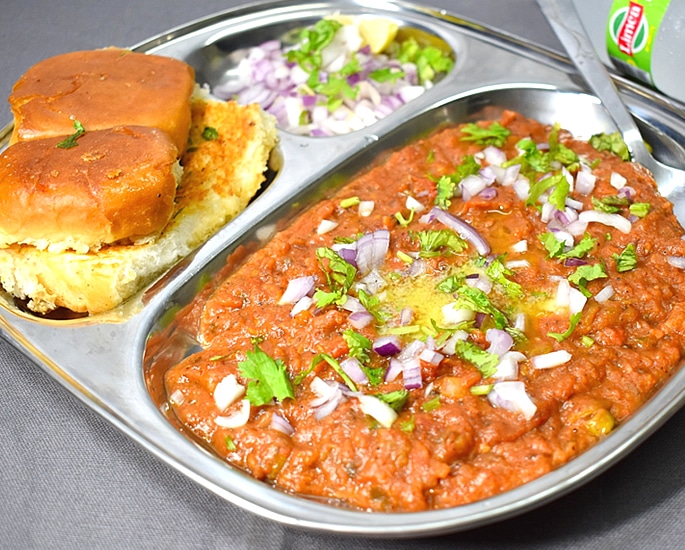 Pav bhaji is a fan-favourite when it comes to Delhi street foods. It is so popular that it is available in most Indian states.

It originated in Mumbai as a fast-food dish during the 1850s. Pav bhaji was a fast lunchtime dish for textile mill workers.

It later made its way into restaurants and is now widely available.

Pav bhaji consists of mashed vegetables such as potatoes, peas, cauliflower and various others. It is then made into a thick curry and served with a soft bread roll.

Some vendors prefer to butter the bread and toast it before serving. That gives it an added texture, the slightly crispy bread contrasts with the soft vegetables.

On the streets, pav bhaji is eaten by the locals and tourists during the evening as it is a filling meal to enjoy. 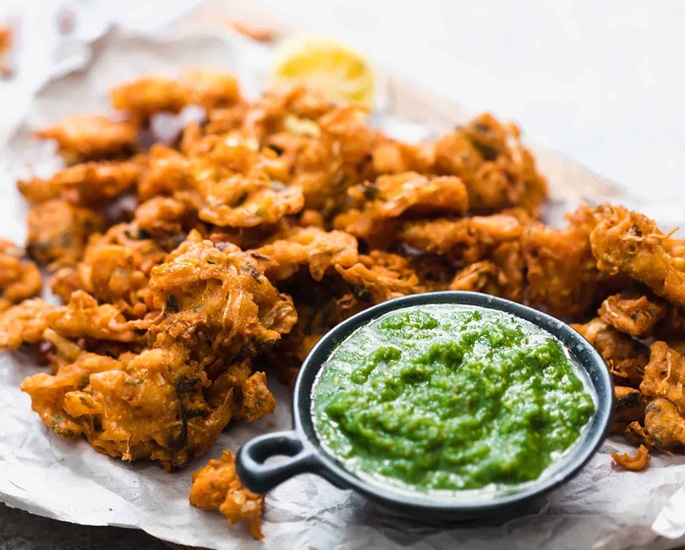 Pakoras are a classic street food option in Delhi and they are simple to make. Many enjoy them because they are flavourful, quick to eat and cheap.

The snack is essentially a spoonful of batter stuffed with various ingredients and deep-fried until golden brown.

It is a dish which may have originated in Uttar Pradesh, but they have made their way to Delhi and various other regions.

Traditionally, pakoras are made with vegetables like onions and potatoes.

However, with an evolving taste palette and more freedom to experiment, more and more varieties of pakora are appearing at street food stalls and in restaurants. 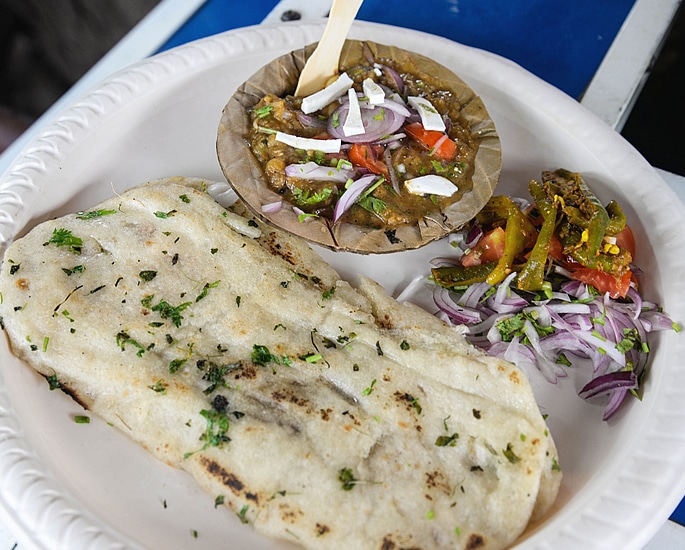 Chole kulche is a street food which is enjoyed in North India but it is extremely popular in Delhi.

It is a spicy, tangy and flavourful chickpea curry which is accompanied by a mildly leavened flatbread known as kulche.

Kulche is made using curd, white flour, salt and a pinch of baking soda. They are rolled out and chopped onions are placed into the dough before it is closed.

They are cooked in a hot pan before it is served alongside the chole.

The mixture of soft bread soaking up the intense flavour of the sauce and the slightly firm chickpeas results in a balance of flavours and textures.

It is why so many people love this Delhi street food.

Delhi has a range of delicious street foods which showcase the city’s rich culture. While some originate in Delhi, others made their way there and became popular.

Each authentic dish can be found on the streets and they promise big flavours.

Whether they are sweet or savoury, these street foods are what the locals enjoy eating and it is the reason why they keep coming back for more.

Dhiren is a journalism graduate with a passion for gaming, watching films and sports. He also enjoys cooking from time to time. His motto is to “Live life one day at a time.”
7 Naan Recipes which can be Made at Home
10 Best Drinks in Pakistan known for Their Amazing Taste