7 Naan Recipes which can be Made at Home

There is a variety of delicious and filling naan breads to try out. Here are seven tasty recipes that you can make at home.

It adds a stronger and spicier flavour to the naan

Naan bread is a staple within Indian cuisine and it is something that more and more people are making at home.

The food has had a long history, having been first recorded in the notes of Indo-Persian poet Amir Kushrau in 1300 AD.

Traditionally, naan accompanies food from the Northern area of India as well as countries like Pakistan, Afghanistan and Bangladesh.

It may have first came about in India but it is extremely popular around the world as there are many varieties.

Naan is enjoyed in most South Asian restaurants and one of the reasons is because of the way they are cooked. Naan is typically baked in a tandoor (clay oven).

However, it did prevent people from eating it in the home as the majority of households do not have tandoors so they felt they could not achieve the same great taste.

Now, there are ways in creating the authentic taste of naan, from the ingredients used to the cooking methods. We have seven tasty naan recipes for you to make yourself. 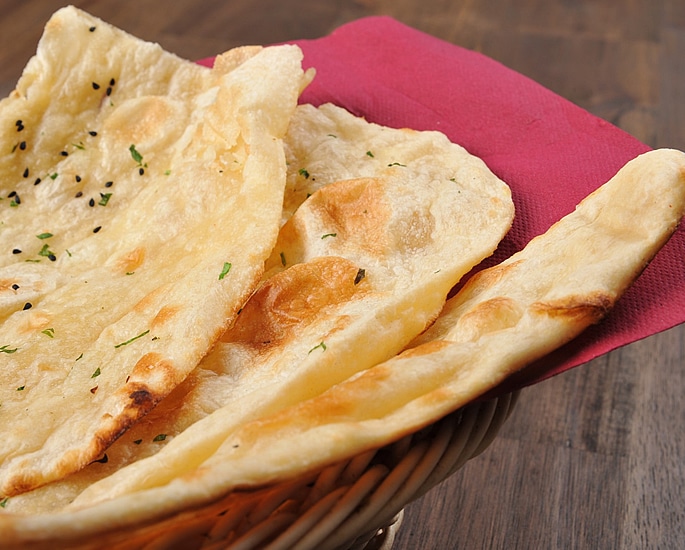 A plain naan is a classic choice as there are no other prominent flavours coming from it. The authentic taste of the bread is fully showcased but the addition of onion seeds adds a slightly bitter taste.

The yoghurt is what aerates the bread and naturally leavens it, giving it a light and fluffy texture.

The recipe does not contain any other ingredients but if you prefer some extra flavour, feel free to add extra herbs and spices. 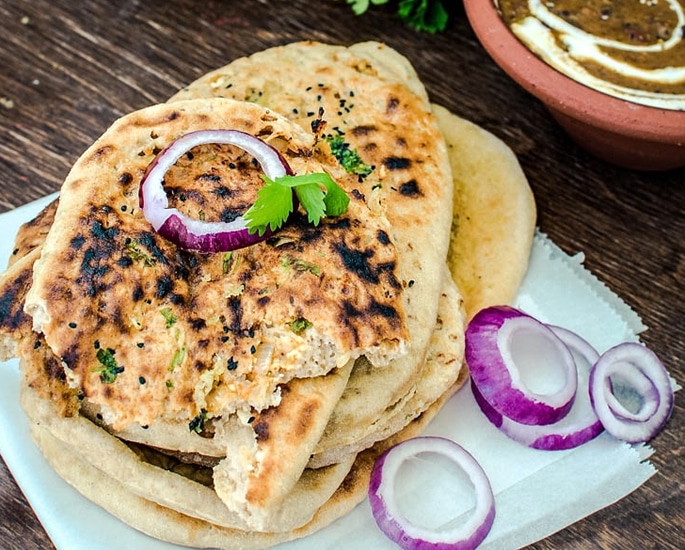 A recipe which can be a delicious meal as opposed to having with a meal is a paneer stuffed naan.

It is a recipe which has two sets of contrasting textures that work well. The slightly crispy and fluffy bread quickly changes to soft paneer.

The paneer is combined with red chillies and cumin to give it some heat and a hint of earthiness to the otherwise mild cheese.

This recipe was inspired by My Ginger Garlic Kitchen. 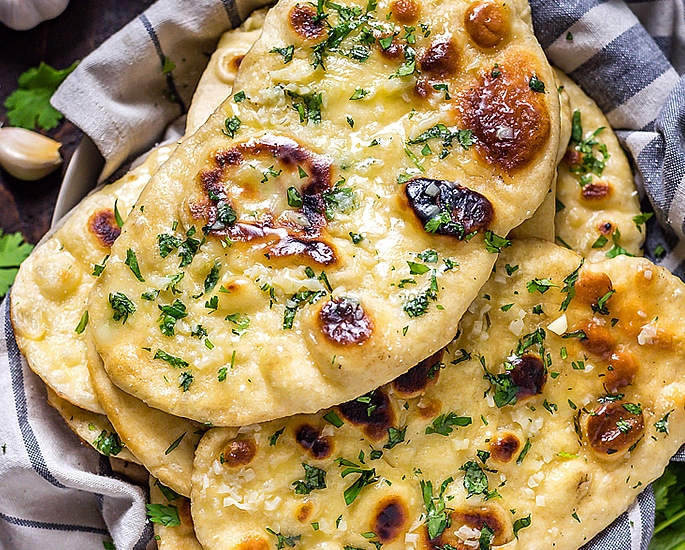 One of the most popular types of naan bread is garlic naan. It follows a similar process to how a plain one is made but there is the addition of garlic.

It adds a stronger and spicier flavour to the naan and it gives off wonderful aromas.

When combined with it’s cooking method, there is a subtle smoky flavour that pairs well with the garlic.

For the Garlic Butter

This recipe was adapted from Cook with Manali. 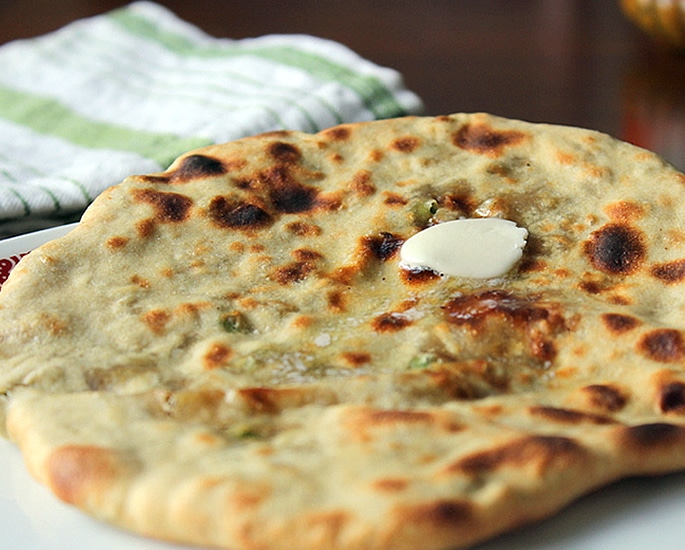 Aloo matar is a classic vegetarian dish within Indian cuisine but the dish can also be stuffed into a naan to create a filling dish.

They are crispy yet soft and have a lovely mashed potato and pea filling.

The two vegetables combined with an assortment of spices make it a spicy and tangy filling.

Even though this recipe takes time to make, when it is finished, it will be worth the effort.

This recipe was inspired by Plums n Peppers. 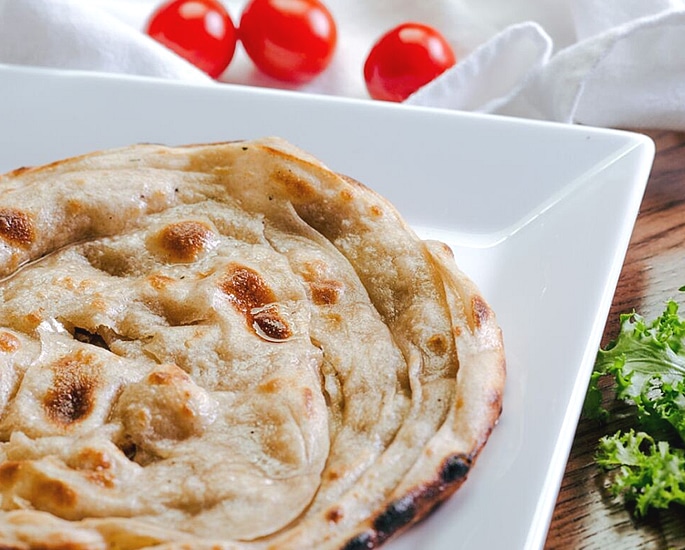 Laccha naan is a unique option compared to others in terms of appearance as there are several layers which appear when cooked.

That is because when the dough balls are made, they are rolled into a tube before being rolled again into a pinwheel. The pinwheel is then rolled into a circle which creates a layered effect.

While it has a different appearance, any type of naan can be made, this particular recipe is filled with grated cheese.

This recipe was inspired by Cooking from Heart. 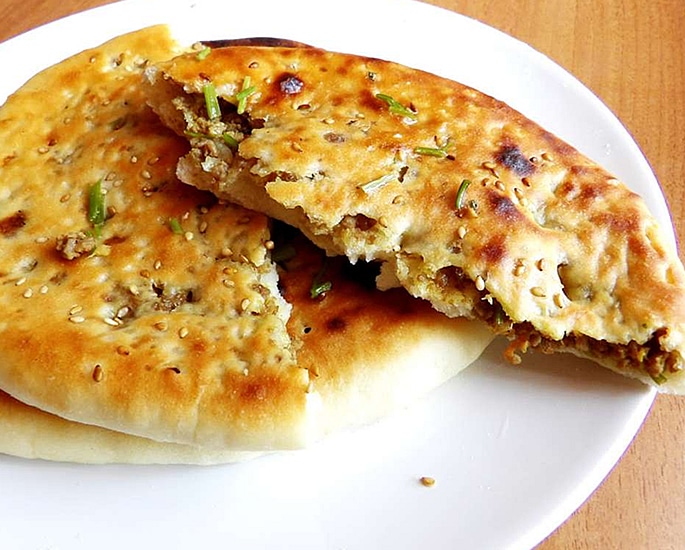 When it comes to stuffed naan bread, arguably the most popular is keema. There is nothing like the soft, airy bread filled with spicy meat.

It is a contrast in two sets of flavours and textures which go together extremely well.

The keema is cooked separately, left to cool and then stuffed into the naan dough before being baked. This is an amazing option for meat lovers.

For the Keema Filling 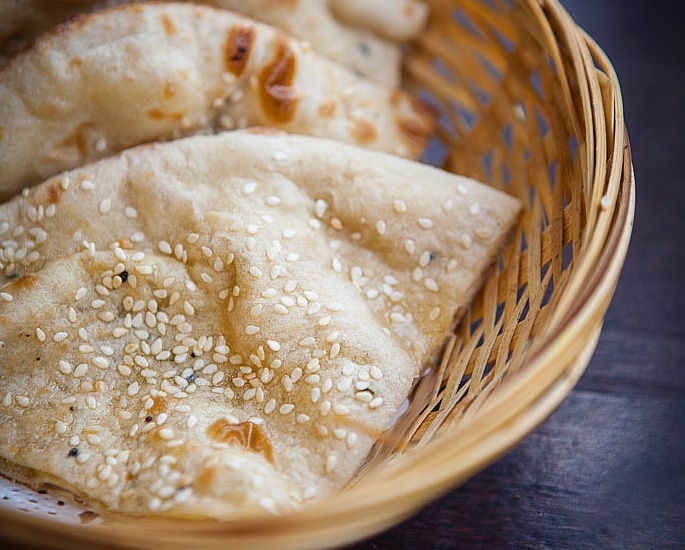 Peshwari, or Peshawari, is a naan option which is a favourite among people with a sweet tooth as they are typically filled with dried fruits.

This particular recipe is made with pistachios and almond powder for a nutty flavour as well as sultanas to give it some sweetness.

The addition of coconut powder and desiccated coconut gives this recipe an extra level of texture.

This recipe was inspired by Greedy Gourmet.

Whether they are on their own or stuffed, there is a range of naan bread options which can be made from the comfort of your own home.

Even though these seven recipes are a step-by-step guide, feel free to adjust some of the ingredients to your taste.

Making naan bread yourself guarantees a more authentic product than what you get in the shop, so try them out and you will see the difference in taste.