History of the Naan

The Naan has made a mark in South Asian cuisine through the centuries. We look at where it began and how it is enjoyed in its different forms today.

Naan was originally cooked at the Imperial Court in Delhi.

The Naan is one of the most popular flatbreads served with South Asian food.

Have you ever been spoilt for choice for its vast selection today and wondered about its origin? We explore and discover more about this delightful and enjoyable flatbread which is popular in many parts of the world including the UK, USA and Canada.

The Naan originates from India but is today eaten in most types of South Asian restaurants and homes around the globe.

This unique style of flatbread has transformed from a basic form of bread for many to experimental creations by chefs and food enthusiasts today with different fillings and flavours. 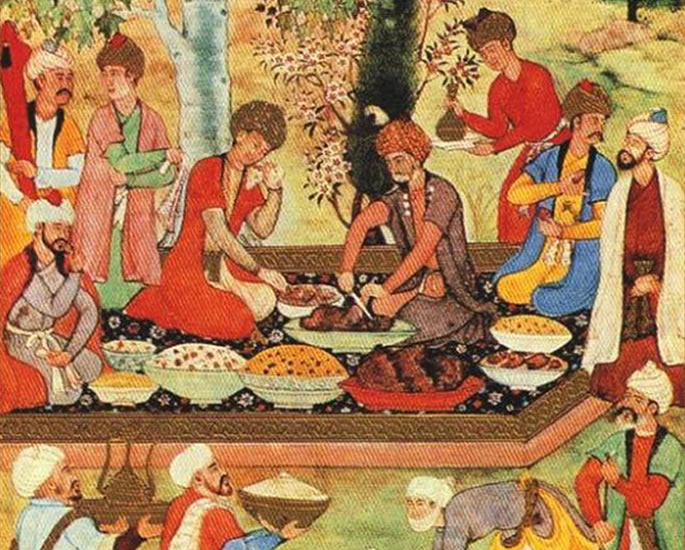 It is possible that a variety of the Naan bread could have been baked and made during the Harappan period, also known as the Indus civilisation. This was the period when chapattis and thick rotis were developed.

In ancient Persia, bread was baked on hot pebbles and its possible that the Naan flatbread is related to this bread.

It’s said that the Delhi Sultans introduced the use of the tandoor, naan, keema, and kebab cooking and food before the Mughals in India.

However, its first recorded history of the Naan can be found in the notes of the Indo-Persian poet Amir Kushrau in 1300 AD.

According to Kusharu’s records, it was originally cooked at the Imperial Court in Delhi as naan-e-tunuk (light bread) and naan-e-tanuri (cooked in a tandoor oven). Tanuri was bread which was thicker and baked in a tanur (tandoor).

During the Mughal era in India from around 1526, Naan accompanied by keema or kebab was a popular breakfast food of the royals.

The flatbread remained a delicacy for the Northern Indian royals due to the specialised way it was made for decades. But by 1700, there re some mentions of this flatbread reaching other classes of Indian society.

The word Naan is derived from the Persian word ‘n?n’ which refers to bread and initially appeared in English Literature dating back to 1780 in a travelogue of William Tooke.

In Turkic languages, such as Uzbek, Kazakh and Uyghur, the flatbreads are known as nan. Therefore, similarities in the word are evident. 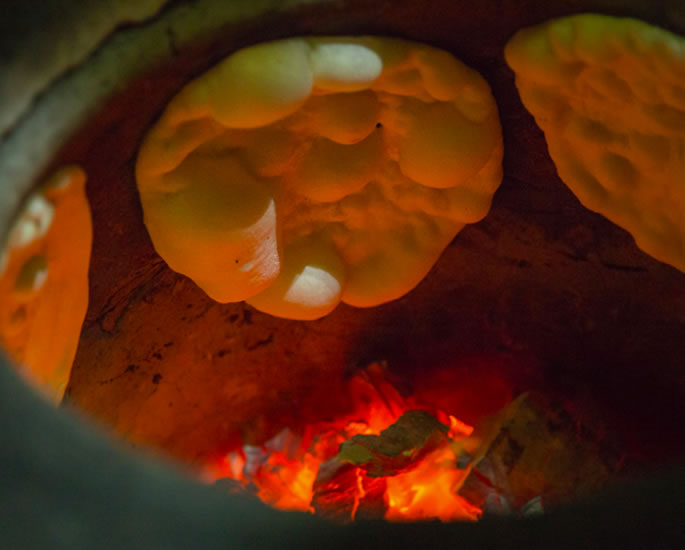 Another invention that is closely related to the Naan is the tandoor – the clay oven.

The tandoor became a major aspect of Punjabi cooking in undivided India. There are records of tandoor cooking going back to Mughal emperor Akbar’s and Jahangir’s reign during the 16th century.

The tandoor became the staple way of cooking Naan during these times and this way of making the flatbread has continued right up to today, however, some do use conventional ovens to cook it too. Whereas, chappati or roti is cooked on a flat or slightly concave iron griddle called a tawa.

Modern recipes sometimes substitute baking powder for the yeast. Milk may be used to give greater volume and thickness to the flatbread.

There are even gluten-free recipes available for this popular flatbread.

Typically, Naan is served hot and brushed with ghee (clarified butter) or butter. 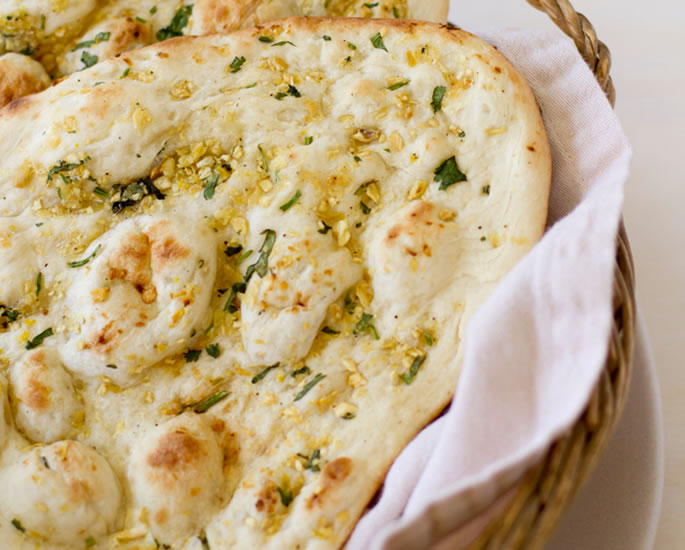 The Naan which is known for its soft and fluffiness and original flavour also led to other types of it being created.

Different types of Naan also became popular depending on them either being stuffed or coated with specific toppings. The many varieties include:

Kulcha is another flatbread which was derived from the Naan. In many ways, its soft and chewy taste was very similar to the Naan, but it was cooked on a tawa or kiln made from brick, making it easier for the masses to enjoy and not just royalty when it was first introduced.

There are various other derivatives of South Asian flatbreads. These are Chappati, Bhatura, Dosa, Romali, Puri, Luchi, Tandoori Roti, Pitta Bread and Paratha.

So which came first? The Naan, Chappati or the Pita bread?

Actually, it was the yeast. Yeast was first used in Egypt in 4000 BC but wasn’t understood till much later.

Flatbreads from 4000 BC-19th Century were un-leavened. People came to grips with the process of the yeast in the 19th Century.

Pitta bread was one of the earliest forms of flatbread. Naans were said to be cooked around the 13th century and Chapatti became popular in the 16th Century. 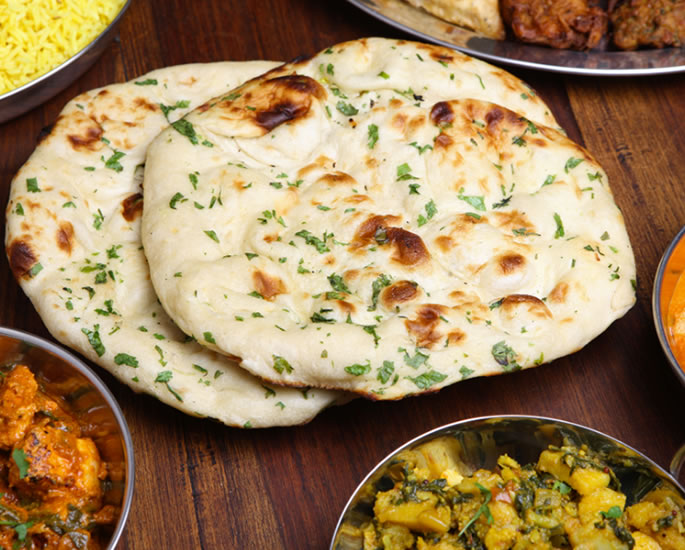 The Naan has become a very popular flatbread to accompany Indian and Pakistani cuisine worldwide.

There are special restaurants serving all kinds of naans based on customer tastes and needs in India and Pakistan.

They are being used as the base flatbread for many different toppings such a mixed vegetables (sabzi), grilled meats and even the advent of ‘Naan Pizza’ is seen in stores and at dinner tables.

In the UK, in 1926, overlooking the hustle and bustle of Regent Street, Veeraswamy, Britain’s oldest Indian restaurant served Naan on its menu.

Founded in 1984, Honeytop Speciality Foods became the first company in Europe to supply authentic Naan bread on a commercial scale to major retailers and restaurants. They introduced the first 13-week shelf-life flatbread.

The ‘World’s Biggest Naan Bread’ was made in 2004 by Honeytop Speciality Foods. It measured exactly 10ft by 4ft and celebrated the launch of Brewers Fayre’s Curry Nights in the UK. It took over five hours to make and required eight staff to carry it!

Another major record broken was by the restaurant called the Indian Ocean. They broke the Naan World Record by making 640 flatbreads in just one hour. They out-numbered their target- 400, set by the Guinness Book of World Records. They were distributed to charity and greatly appreciated by the Salvation Army Hostel in Manchester, UK.

In Birmingham’s Balti restaurants in the UK,  a ‘Family Naan’ can be ordered, which is a large table-sized flatbread cooked for everyone to share with their balti dish. There are also, many ethnic bakeries opening in the UK, making fresh ones for customers at fantastic value, for example, four freshly cooked Naans for £1.

The Naan today is available in UK supermarkets and produced in high volumes as an accompaniment to a curry or balti; chefs are always creating new varieties of this original flatbread of the Mogul era, and people are also having a go at making it in their own homes.

It has made its mark in history as being a staple form of flatbread fully enjoyed by millions around the globe.

Images courtesy of The Blissery