Shilpa Shetty after launching her 'Shilpa's Gourmet Creations' range of ready-made meals in September 2009, visited Camden, London, to launch her Vegetarian selection for the range. All made to be healthy, tasty and low in fat.

&quot;We have emphasised for it to be under 10% fat&quot;

Shilpa Shetty launched her “Shilpa”s Gourmet Creations” food range by investing in the V8 Gourmet Group in September 2009. The venture is a team effort with Shetty and one of the UK’s leading chefs, Andy Varma.

Shilpa and her husband Raj Kundra have invested and procured a 33% stake in the V8 Gourmet Group that encompasses Vama, The Bombay Bicycle Club and Tiffinbites. The group is behind creating Shilpa”s food range and the project is coming to fruition with the launch of a new vegetarian selection.

The brand is to be a line of authentic Indian dishes set to launch in restaurants throughout Europe, Dubai and Jordan. The line of food is intended to reflect Shetty”s own eating plan, which is said to focus on a combination of health and taste. 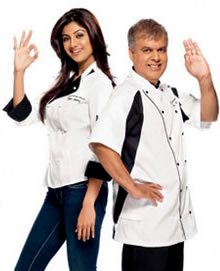 The perception that Indian food is very fattening is what Shilpa wants to address with her range. She is keen to introduce ‘ready made’ Indian meals that will be under 10% fat. She says: “We have emphasised for it to be under 10% fat which is the USP for our brand range.” The USP is a Dietary Supplement Verification Programme which is a voluntary testing and auditing programme that helps dietary supplement manufactures ensure the production of quality products for consumers.

Encouraged by how much Indian food is enjoyed by the masses in the UK, she says: “I completely adore and admire the fact how people here love Indian food!”

Shetty feels that in the early days curries in the UK were made with cream to reduce the edge of the spice in the curry, to cater for the non-Indian taste buds. She says: “People here love their curries. They can”t do with out them but at the same time they can”t have them as pungent as we do.”

She has huge belief in the wider benefits of authentic Indian food for health and well being. She says:”I want to break away from the pre-conceptions that Indian food is fattening,” and wants to demonstrate this in her range.

A selection of vegetarian meals are being introduced to the “Shilpa”s Gourmet Creations” range. Shilpa says: “Vegetables are a vital source of vitamins and minerals, but vegetarian doesn’t have to mean bland and rubbery food,” and added: 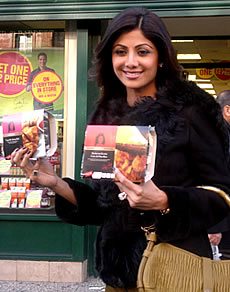 The health and fitness concious Bollywood actress was in the UK to unveil the 5-dish range at Holland & Barrett”s Camden store. She tweeted on her way to the event: “On my way to Camden,Launching the new Veg range of”Shilpas gourmet food”.Fresh and healthy and very indian;)So excited.its a big day.”

The vegetarian dishes launched at the Camden event included Onion Bhaji, Mushroom Korma and Vegetable Masala. From a health point of view, Shetty is proud to launch Shilpa’s Gourmet Creations with Holland & Barrett, and commented on the support of Britain’s leading health food retailer.

Andy Varma joined Shilpa at the Camden Town launch and after the event tweeted: “Shilpa Shetty”s launch was a massive success! Holland & Barrett sold out of her fab ready meals in one afternoon!”

Being Head Chef, Andy Varma has what it takes to ensure Shilpa gets the dishes she is looking for to add to her range. He has a flare to experiment and create dishes with exquisite flavours. He says: “I enjoy being creative and developing new dishes, conceptualising new designs and making them into reality! Creativity is just wonderful, whether in the kitchen or on the drawing board!!”

Shilpa Shetty has taken the steps to produce meals that have a healthier kite mark and hopefully, it will educate people on how Indian food can be made with less fat without compromising on taste.

Madhu is a foodie at heart. Being a vegetarian she loves to discover new and old dishes that are healthy and above all tasty! Her motto is George Bernard Shaw's quote 'There is no love sincerer than the love of food.'
Why ‘Curry’ is not Indian
History of the Naan