Are Rice and Naan compulsory for an Asian Dish?

Within Asian cuisine, many think that rice and naan are compulsory alongside it. We present some alternative options to have instead.

this round flatbread is a staple within Indian cuisine.

When it comes to Asian cuisine, the two main accompaniments are rice and naan.

Both are staples in the Indian subcontinent and offer different tastes and textures when eaten with an intensely spiced meat or vegetable curry.

Despite them being very popular, they can become tedious, especially if they are eaten each day.

This has resulted in the belief that rice and naan are compulsory.

Thankfully, there are a number of fantastic alternatives which go great alongside Asian dishes originating from South Asia.

Some are obvious while others are more obscure. Nevertheless, they are great substitutes for rice and naan and prove that they are not compulsory alongside an Asian dish. 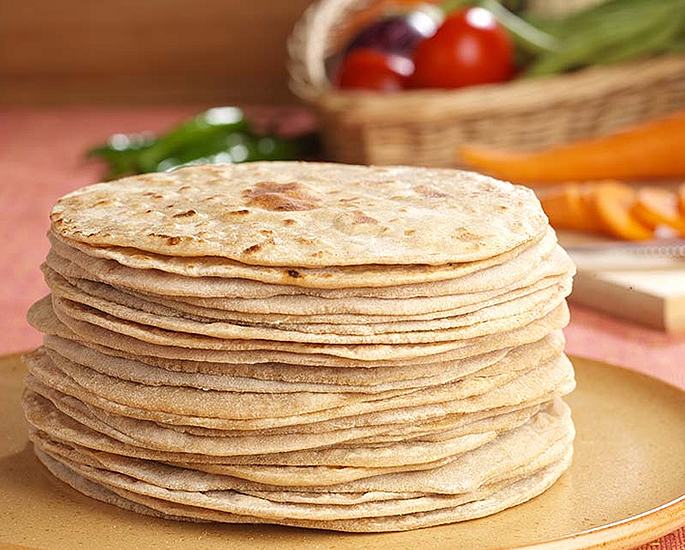 When it comes to rice and naan alternatives, the most popular one is roti.

Also known as chapati, this round flatbread is a staple within Indian cuisine. It is so well-known, there are different variations across the globe.

From makki di roti to rumali roti, there are different types to try out to keep mealtimes exciting.

It is made from stoneground wholemeal flour, traditionally known as atta, and water. Both are then combined into a dough.

It is then divided and rolled into thin circles. The roti is cooked on a flat skillet until it puffs up.

Roti is typically eaten with meat or vegetarian curries. People tend to break up the roti and scoop up the curry with it, the roti acting as a carrier.

While roti is unleavened, naan is a yeast-leavened bread.

Roti is the perfect alternative to naan because it still provides carbohydrates but it is far lighter than naan, meaning that there is more room for the flavourful curry. 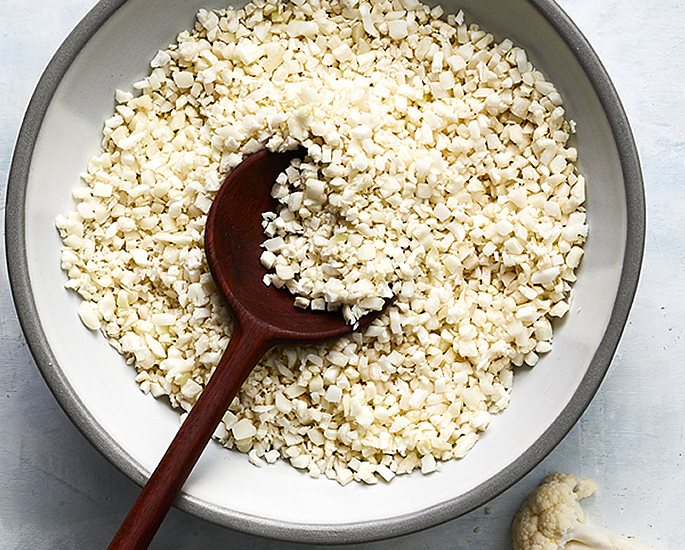 Although it has ‘rice’ in the name, cauliflower rice has no rice present, therefore it is a great way of showing that rice is not compulsory in Asian dishes.

Within the last five years, cauliflower went from being just a vegetable to becoming the go-to vegetable.

The popularity of cauliflower rice stemmed from a combination of the vegetable’s versatility and a desire for a healthy alternative to rice.

Cauliflower rice is essentially cauliflower that has been chopped into tiny pieces until they look like grains. It is then sauteed on the stove.

This makes it an ideal accompaniment to Asian dishes, especially curries with a rich sauce.

Those who want to lower their calorie intake can also replace rice for this cauliflower alternative.

In some recipes, the dish is cooked with various spices and other vegetables to create a flavourful meal that is an alternative.

It is the versatility which makes cauliflower rice a great alternative to rice and naan. 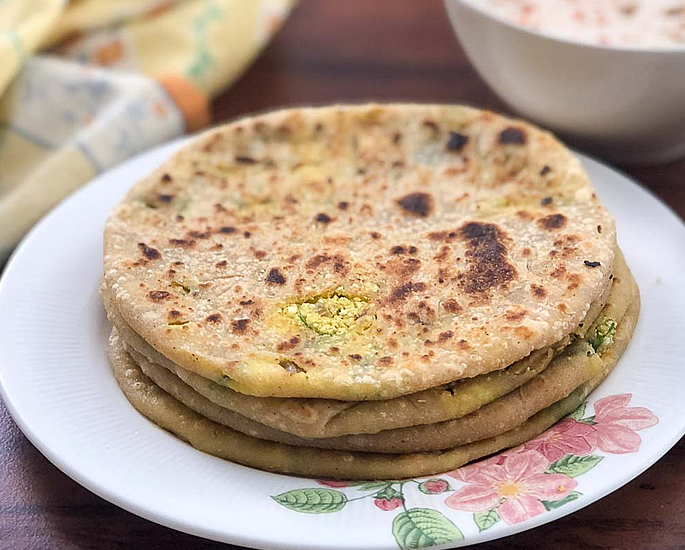 Paratha may be an important part of a traditional Indian breakfast but it can also show why rice and naan do not have to be compulsory.

This popular unleavened flatbread is native to the Indian subcontinent.

The name is a combination of the words ‘parat’ and ‘atta’, which literally means layers of cooked dough.

Paratha is made by cooking wholewheat dough on a flat skillet and finished off by shallow frying.

Compared to roti, parathas are more substantial no matter which variant you opt for.

For plain paratha, layers are created by coating the dough with ghee and folding repeatedly. The most well-known variant tends to have mashed vegetables mixed in with the dough.

Both types are a suitable alternative to rice and naan, especially the stuffed paratha because they offer an added depth of flavour when eaten with the main meal.

The different types are also enticing. While various vegetables can be used, the most popular is made with mashed, spiced potatoes.

Other types are made with leaf vegetables, cauliflower, paneer and sometimes, keema.

Dishes which go well with paratha include daal, lamb nihari and fried potatoes. 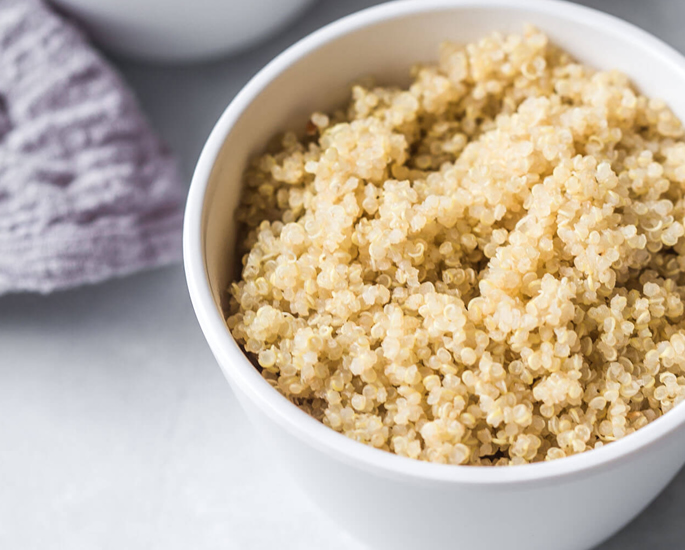 Quinoa provides an alternative to rice and naan. This herbaceous plant is grown as a crop primarily for its edible seeds.

It may have originated in South America but its cultivation has spread to over 70 countries, including India.

Quinoa is mainly known for its health benefits, which is why many people substitute it for rice during their meals.

It is gluten-free, high in protein and one of the few plant foods that contain sufficient amounts of all nine essential amino acids.

The health benefits make quinoa ideal alongside Indian food especially when you consider that a lot of Indian dishes are high in calories.

A lot of vegetarian recipes substitute rice for quinoa. For example, a mixed vegetable pulao dish can be made with quinoa.

The creamy, nutty taste of quinoa combined with intense spices makes it one alternative to try out. 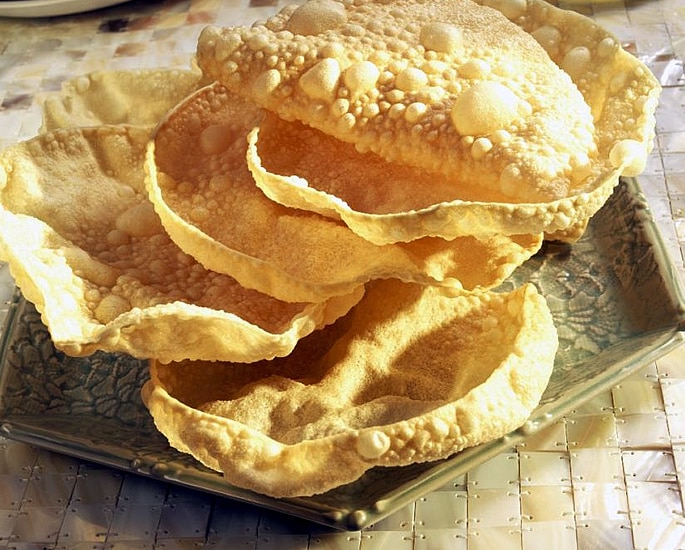 Poppadoms may seem like a strange alternative to rice and naan but it is one to try with Asian dishes.

It is usually served as a snack, alongside toppings such as chopped onions, chutneys and condiments but for some people, it is a vital meal.

Preparing a poppadom varies from region to region but they are typically made from flour or paste derived from lentils, chickpeas or black gram.

Salt and oil are added to make a dough. Seasonings like chilli, cumin, garlic or black pepper can be added at this point.

The dough is then shaped into thin circles and dried. It is then cooked by deep-frying or roasting over an open flame.

Like roti, poppadoms can be used as a carrier to eat a variety of Asian dishes.

However, the main difference is that you will get a distinct crunch with every bite. 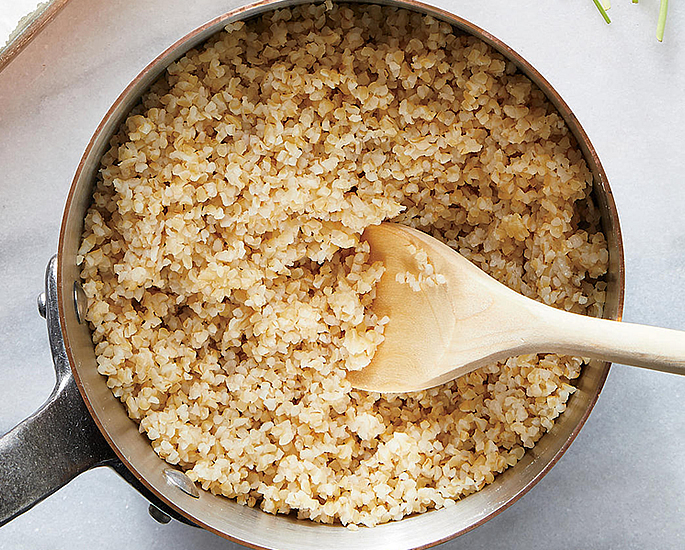 Bulgur is something which some may not be familiar with but it provides a delicious and healthy substitute for rice and naan.

Bulgur is a cereal food made from the cracked parboiled groats of several different wheat species, most often from durum wheat.

It is a common ingredient in Middle Eastern and Mediterranean cuisine but it is also known to be used in Asian cuisine.

Bulgur has a light, nutty flavour and comes in a range of grinds.

Unlike rice and naan alternatives, bulgur does not require cooking, it only needs to be soaked in water.

In terms of Indian food, bulgur can be eaten alongside spiced vegetarian dishes. It can also be used for rice dishes. For example, cooking enthusiasts can make biryani or pulao with it.

When it comes to health benefits, bulgur holds its own against rice with more than twice the fibre and four times as much folate.

Rice and naan are not compulsory with Asian dishes and bulgur is one healthy alternative to eat.

These rice and naan alternatives are a welcome accompaniment to any Asian dish.

Not only do they taste great but some are even more nutritious than their counterparts.

They prove that not every Asian dish needs to be eaten with rice and naan. So, try these out the next time you sit down and have an Indian meal.

Dhiren is a journalism graduate with a passion for gaming, watching films and sports. He also enjoys cooking from time to time. His motto is to “Live life one day at a time.”
Halwa Puri Cholay: The Traditional Indian Breakfast
Quick & Easy Indian Street Food Recipes at Home