The Origin and History of the Popular Poppadom

Poppadom, papad or appalam, this disc-shaped appetiser is a staple to many South Asians across the world. But what are its origins and history?

The poppadom is famous across the southern region of the Asian continent. Serving as an accompaniment to most South Asian dishes, this thin yet crispy circular snack is rather versatile.

Whilst the origin of the poppadom is India, it has made way across other South Asian countries. The popularity of the poppadom saw it crossing to other parts of the world.

Traditionally, the main ingredients of the poppadom include lentils, black gram flour, chickpeas and rice flour. From this foundation, there are many variations in flavour of the poppadom.

Although many consider poppadom as an appetiser, it is a vital meal in some areas of India.

Additionally, it is one of many essential food items in the South Asian household, helping to spice up a meal.

The appetiser can be eaten plain or a bit more adventurous with various condiments and chopped vegetables.

In contemporary times, poppadoms are popular, whether the preparation is from scratch, available at a restaurant or conveniently accessible at your nearest supermarket.

But, what are the origins of this appealing appetiser? We take a look back at the history of the poppadom and what it means to people.

The History of the Poppadom 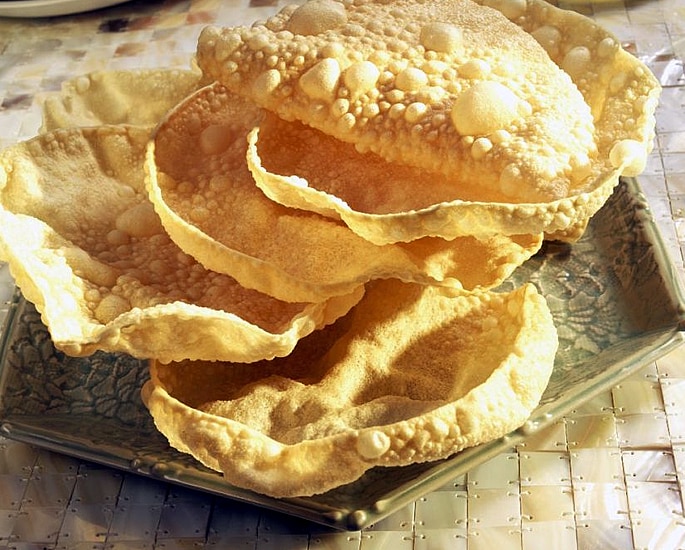 Meaning a flattened disc, the poppadom has derived from the word ‘parpata’ in Sanskrit.

Initially, this snack was ritually handmade by women at home. The women within the household got together to slice, peel and sundry so that they made the perfect poppadom.

The necessary base ingredients of the poppadom are black gram flour, rice or lentil flour, salt and oil. A dough is made from the ingredients, forming a thin, circular shape, which is similar to the Mexican tortilla.

Making a thin texture helps in creating a good poppadom. This is only possible by carefully deriving the right portions and different mixtures.

Once the preparation is complete, the snack is traditionally put to dry in the sun. People can cook a poppadom directly on a stove or fry them.

Alternatively, others store the circular bread in a container and cook it on a stove until crisp before serving.

Following World War II, Britain saw a spike in South Asian people coming over to settle down. Subsequently, this had an influence in spreading their exquisite cuisine, including the poppadom.

Ever since, people of Britain have shown admiration for many South Asian cuisines, especially Indian. Also, they have made it a regular to eat and even cook these cuisines. 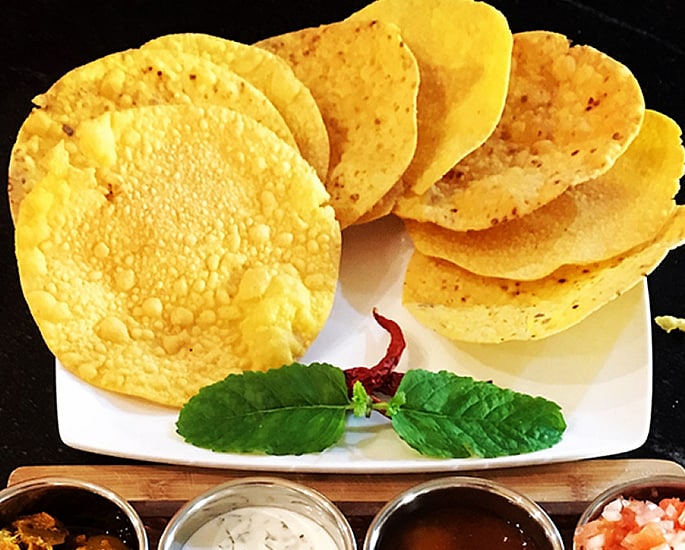 This food delicacy is famous by different names according to the various regions of India.

It is familiar as ‘appalam’ in Tamil Nadu, ‘pappadam’ in Kerala, ‘appadam’ in Andhra Pradesh and Telangana, ‘happala’ in Karnataka and ‘papad’ in Punjab and Gujarat.

Similarly, the foundation recipe for the poppadom varies in different regions and countries. For example, in Pakistan, the base ingredient is rice and its purpose being a snack or a meal accompaniment.

The beauty and simplicity of the poppadom allows the maker to create different flavours.

Cooking or frying the poppadom with dry heat helps to bring out its beautiful flavours. In contrast, some people prefer a simpler approach by microwaving the delicious snack.

Within parts of India, the method of drying poppadoms is first peference, in comparison to cooking them. More so, it is necessary to create vegetarian dishes.

Some regions of India use the dry poppadom to accompany the end of a meal. Essentially, people allow the poppadom to soak up the oils and ghee (butter) from the Desi dishes they may have previously eaten.

Being adventurous, the poppadom also features in a range of fusion dishes. This includes from being part of a salad dish to being broken into small pieces and featuring with rice. 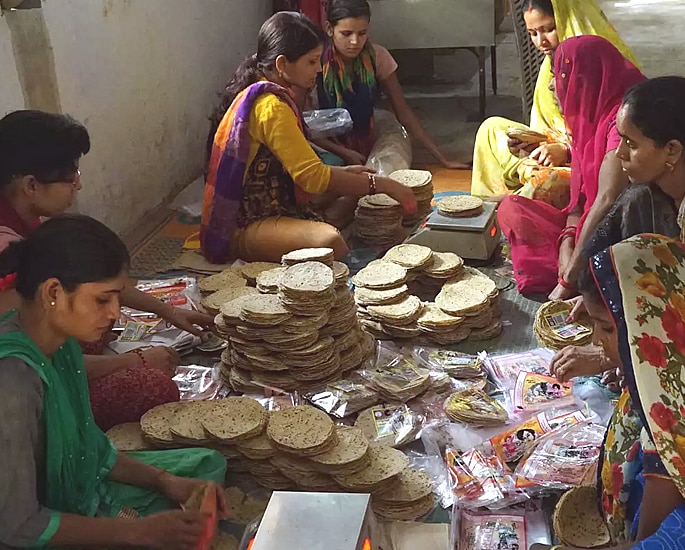 There is an association surrounding poppadoms in India. To clarify, the association comes from the empowerment of women in India.

Across India, many individual women have set up their very own poppadom businesses. As a result, these entrepreneurs earn a regular income and provide for their family.

Establishing in 1959, Shri Mahila Griha Udyog Lijjat Papad is a highly successful women’s cooperative. The assembling of this business was by seven Gujarati women from Mumbai.

These women had a strong determination to earn dignity as individuals. Hence, they went ahead, setting up Lijjat Papad by doing what they knew best, rolling poppadoms.

The whole production of Lijjat Papad is solely by women. The business operations include producing large amounts of poppadoms as well as masala, soap and detergent products, which are shipped worldwide.

The spirit of Lijjat Papad to support the women of India is inspiring, especially with their company slogan, which reads:

Furthermore, Lijjat Papad has a particular yet powerful model for the development and empowerment for female workers of low income.

Within three months of its establishment, it expanded to twenty-five women. 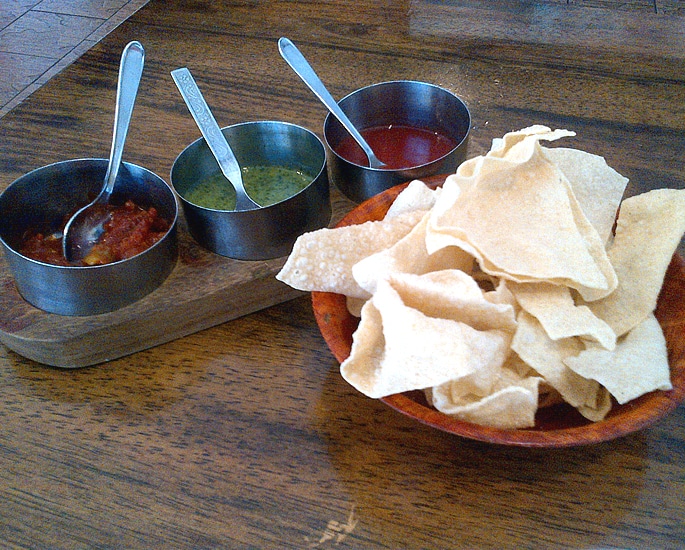 Immigration saw many South Asian families take their exquisite cuisine all over the world, including the United Kingdom.

The poppadom is popular globally, whether it is available at a restaurant, takeaway or present at your nearest supermarket.

It is popular due to the simplicity, which goes a long way.

For instance, most Indian restaurants across the UK serve and/or offer customers poppadoms as a starter. Usually fried, the appetiser is simple and sets the tone before the big meal.

Notably, the snack is set out by the side of various condiments in a pickle tray. Popular condiments include mango chutney, mint chutney, chilli sauce and lime pickle.

Popular supermarkets across the UK such as Tesco, ASDA, Morrisons and South Asian food stores sell ready-made poppadoms. These supermarkets sell their own-brand poppadoms and those produced by big manufacturers.

The theme of simplicity continues as the ready-made appetisers are pretty easy to prepare and eat. More so, some are ready to eat and enjoy, whilst others can be fried or heated in a microwave.

Commercial brands such as Patak’s, Sharwoods and Natco Foods all produce ready-made poppadoms. Typically, they are available in packs of 8-10 with great flavours including plain, garlic & coriander and mango & chilli chutney.

The popularity of the poppadom is certainly interesting, particularly the origin and history to women empowerment and how this simple snack continues to serve many.

This appetiser along with other succulent South Asian dishes will have people across the world appreciating this beautiful cuisine.

Himesh is a Business and Management student. He has a strong passion for all-things Marketing related as well as Bollywood, football and sneakers. His motto is: "Think positively, attract positivity!"
Crackdown on Plastic Eggs being Sold in Pakistan
7 Delicious Types of Dhokla to Make at Home