The Origin and History of Chapati

Chapati, Roti or Phulka, the scrumptious South Asian side dish is also an edible eating utensil. But, what is the history of Chapati?

Being so versatile, it’s no wonder Roti is giving the rice a run for its money!

Chapati, widely known as Roti, is a typical staple food in South Asian countries. But, what is the history of Chapati?

Its prominence in India means that it is just as popular as rice. No meal is complete without a serving of this delicious wholemeal flatbread.

Traditionally, Chapati is made without salt, giving a bland background to spicy dishes. But, there are many variations of Roti found around the world.

The popularity of this side dish stretches from India to America and parts of Europe. Yet, each culture has its own extensive history of Chapati and how this side dish came to be so well-known.

DESIblitz looks back on the origin and historical background of Chapatis.

The Origins of Chapati 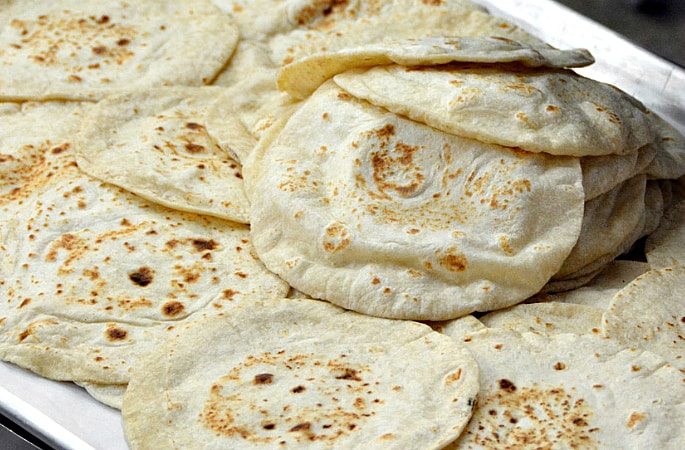 There are many stories behind the history of Chapati.

Some say that Chapati came from the Egyptian Indus Valley civilisation 5000 years ago. Others claim it was founded in East Africa and brought over to India.

However, the most common evidence is that it was founded in Southern India.

Chapati is mentioned in old Sanskrit text from over 6000 years ago. It is also said it was a favourite of King Akbar way back in 1556.

Back then, agriculture was a major occupation in India. The people of India were able to grow wheat and other dry food substances. But, lacked in other sources of crops.

So by cultivating millets and other grains in bulk, grinding them and mixing them with water – Chapati was born! Consisting of ground down wheat and flour, it was a more satisfying way of eating the crops they could grow.

Chapati quickly became an essential for travellers, as a bowl for food. It was easy to make, easy to cook, and was extremely filling. It quickly became a South Asian food staple.

A complicated, yet, fascinating history of Chapati!

How other Countries adopted Chapati? 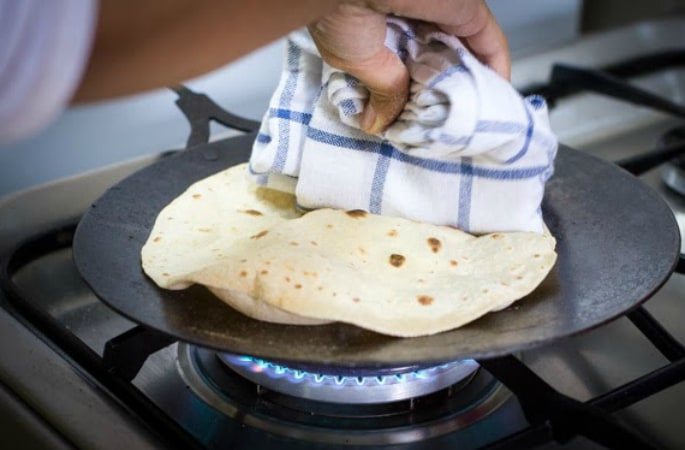 Chapati was essentially brought into other countries via travellers. It became an innovative food for them to carry as it was filling, travelled well, and rarely went off.

It could even hold water and food and also be eaten once used.

Chapati became popular with the British in 1857, during the Independence War. Army dining halls would serve them to soldiers. It became so popular that the British soon preferred Chapati to rice whenever they sat down to eat.

However, a lot of popularity for the Chapati came from immigration. As more Indian families moved to the US and the UK, they brought their cuisine over with them.

Asian cooking became very popular and soon everyone was learning how to make their own curries, rice, and side dishes.

Today Asian cooking is very much in the limelight. Most countries know of or eat Chapati with their meals. When visiting a Balti house, it is not unusual to see Chapati advertised on the menu.

Although over the years the recipe for Roti has rarely changed. It has quickly been adopted and became a staple food for many other cultures as well as India.

How has Chapati Changed Today? 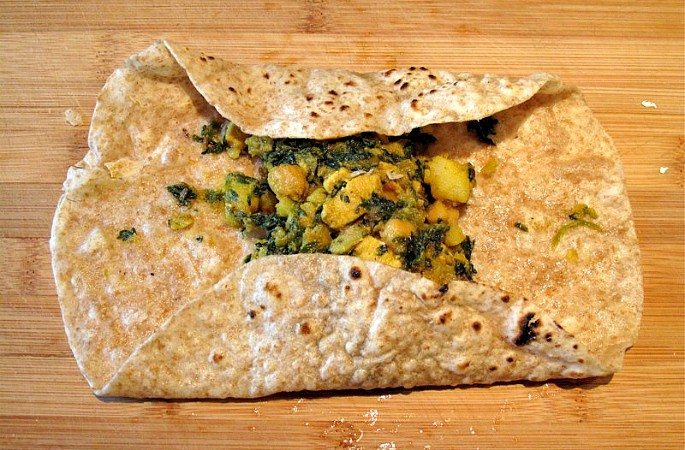 With a rise in experimental cooking, this small flatbread, and a powerful filling up tool, has quickly become a side dish phenomenon.

It’s popular because it is easy and simple to make. Not only that, but, today Roti can be brought ready made in most Asian food stores and supermarkets. Frozen or unfrozen, ready cooked wholemeal Chapatis are available in 8-12 packs. Brands such as Nishaan, Shana and Ashoka, even produce microwaveable Roti.

Yet, traditional Chapatis were famous for having no flavour.

So, whatever dish it’s paired with, it won’t have its original flavour silenced by the Chapati. It can be eaten with sweet and savoury food, making it an extremely versatile side dish staple.

But, there are thousands of ingredients it can be paired with! A lot of modern day chefs experiment with stuffing their Roti. It can be stuffed with spicy potatoes, meat, vegetables, and even sugar coconut!

There are hundreds of recipes online, adopted from different cultures and modernised. Roti has evolved from being plain and boring to being an exciting side dish.

Being both easy to make at home and commercially accessible. The Chapati has quickly transformed from a bland flatbread to a cuisine delight. You can serve it with curries, syrups and even stuff it with your favourite filling.

Being so versatile, it’s no wonder Roti is giving the rice a run for its money!

Yet, it’s interesting to discover how a flatbread has been rotating around various cultures and countries.

There you have it, the history of Chapati!