Within Indian cuisine, rice is a staple food with many eating it every day in different ways. We present 20 popular Indian rice dishes.

Once the meal of choice for the Mughal empire

It is no surprise that there are many Indian rice dishes especially since it is a staple in India.

Many people in the country eat it every day alongside other delicious dishes.

Apparently, there are almost 40,000 varieties of rice but some of the most popular types include basmati, brown rice and long-grain.

While the easiest way to make rice is by boiling it, there are different Indian rice dishes which are extremely popular in various parts of the country and across the world.

Some rice dishes are mildly flavoured while others are filled with intense spices. Some dishes are even sweet and typically served as a dessert.

With so many varieties of meals made with rice, we look at 20 popular Indian rice dishes. 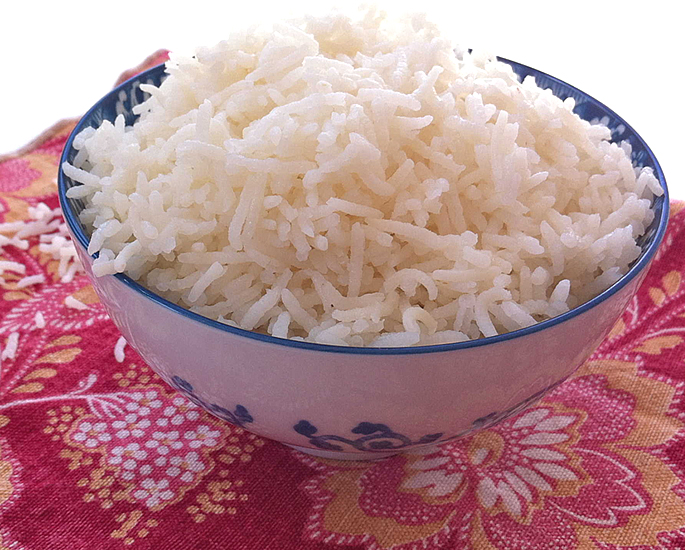 Bhaat is the most recognisable rice dish in India and across the subcontinent. It is very simple to make as it is just rice which has been boiled.

The rice is rinsed and soaked before it is cooked. It is then boiled or steamed.

After it has cooked, the rice is then strained, leaving fluffy rice grains.

As it is boiled or steamed rice, bhaat tends to be eaten alongside vegetable or meat curries. It also forms the basis for various fried dishes such as vegetable fried rice. 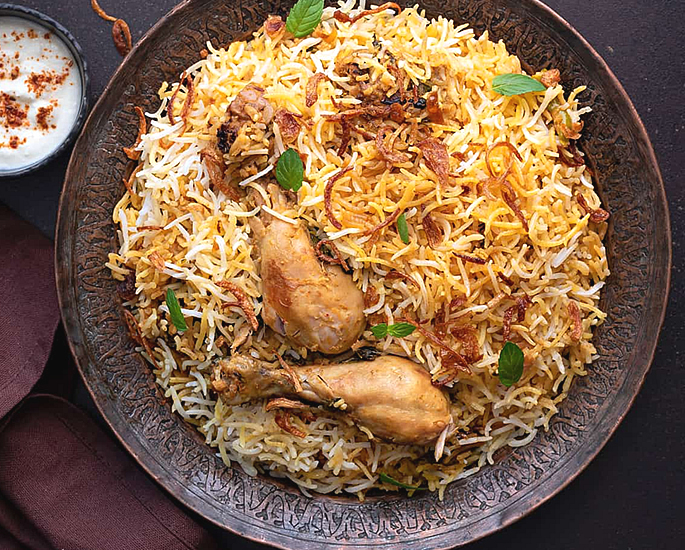 Biryani is a royal Indian rice dish with a distinctive blend of ingredients and prepared in a unique way.

Traditionally, biryani was made with meats such as deer, quail or goat but different versions are now available, including chicken and lamb.

Vegetable biryani is also popular as there are a lot of vegetarians in India.

The dish consists of flavoured rice layered with marinated meat and cooked in an oven to let the multitude of flavours infuse with one another. 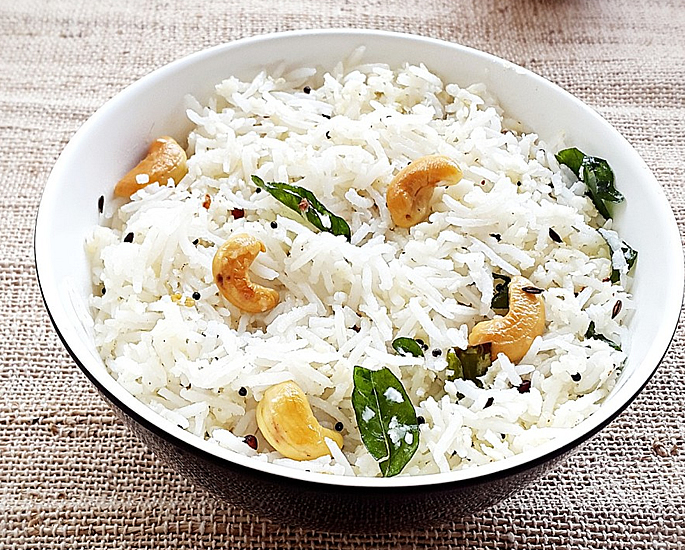 Coconut rice is a popular rice dish in South India. The main reason is because South India is known for its tropical flavours.

This dish consists of cooked rice sautéed with an equal amount of freshly grated coconut, cashew nuts and mild spices.

It is a delicious one-pot meal that can be eaten by itself or served alongside rich curries.

The inclusion of grated coconut adds a subtle sweetness to the dish.

Not only is it tasty but it is also healthy as the monounsaturated fatty acids within coconut help with weight loss and reduces the risk of obesity. 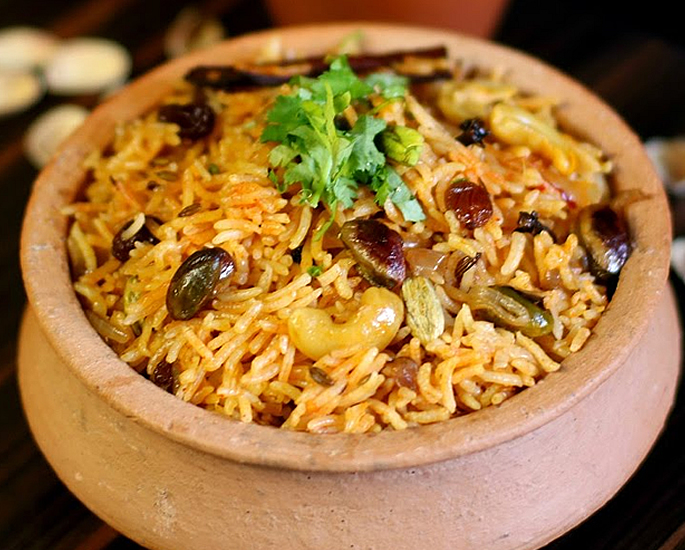 Pulao is one of the most famous Indian rice dishes.

It is rice cooked in a seasoned broth before it is fried in ghee along with various spices, cumin seeds, cashew nuts and raisins.

The result is a mildly flavoured dish with a chewy texture coming from the raisins.

Because it is so popular, different regions have their own versions, made with lentils, vegetables, chicken, fish or lamb.

For example, Kashmiri pulao is made with mild spices which help to keep it light. The fresh pomegranate adds some sweetness as well as vital nutrients. 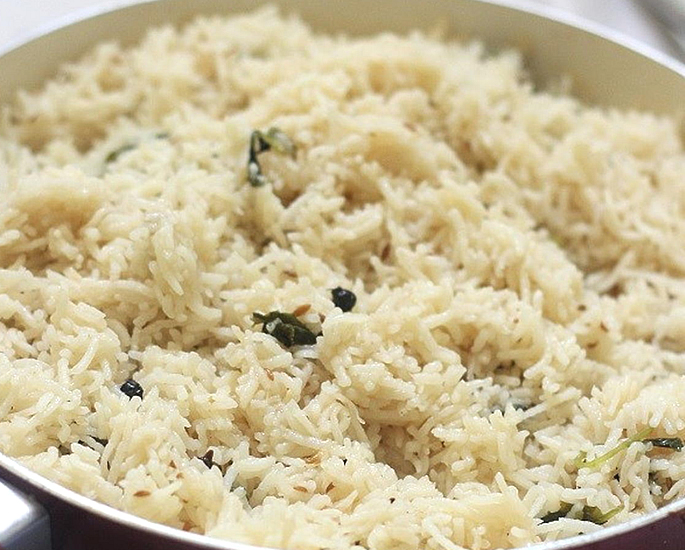 The dish is made with rice and tempered spices as Bagar is the Urdu word for tempering.

Bagara Annam is usually prepared to go alongside some of the region’s rich chicken and mutton dishes.

It is usually cooked with basmati rice similar to pulao, but coriander and mint leaves are generously added to give it a fresher flavour alongside the intense tempered spices. 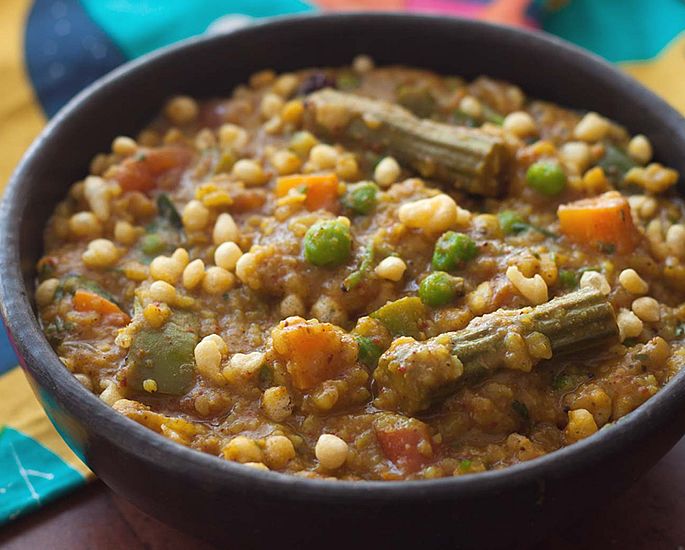 Originating in Karnataka, bisi bele bhaat, which translates to ‘hot lentil rice’ in Kannada language, is a wholesome meal with a varied blend of ingredients.

This comfort dish has gone on to become popular all across India, especially in Mumbai.

Preparing the dish can be elaborate as it involves toor daal, rice, ghee, vegetables and spices. Tamarind is used to give the dish its signature tangy flavour. It is all combined together to create a filling meal.

Some versions of the dish are made with up to 30 ingredients, meaning it can be time-consuming but it will be worth it.

The rice dish is served hot and sometimes eaten with chutney, poppadoms or chips. 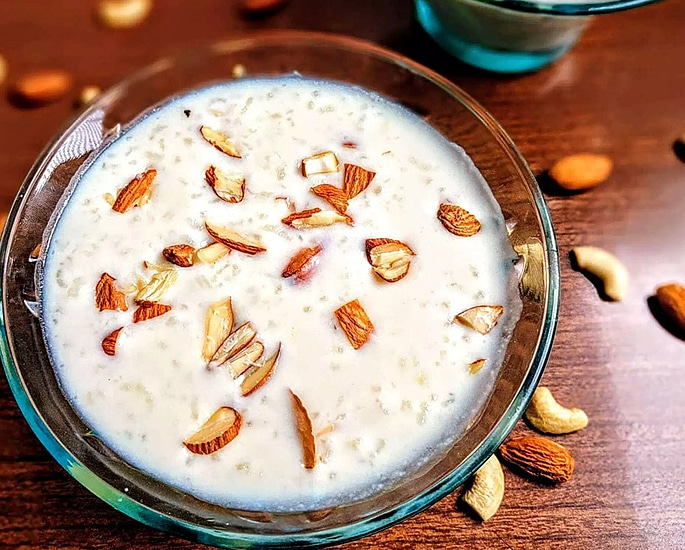 Kheer, or rice pudding, is a sweet dish and it is typically prepared on special occasions.

The dish is made with mixed nuts, dry fruits, saffron and cardamom powder. Sugar is then added for sweetness and it is then slow-cooked.

It is a rice dish which has had a long history, kheer has even been mentioned in Indian folk tales.

The result is a filling dessert which is both healthy and appetising.

The best part is, Kheer can be served hot or cold. Either way, it will win your heart over every single time. 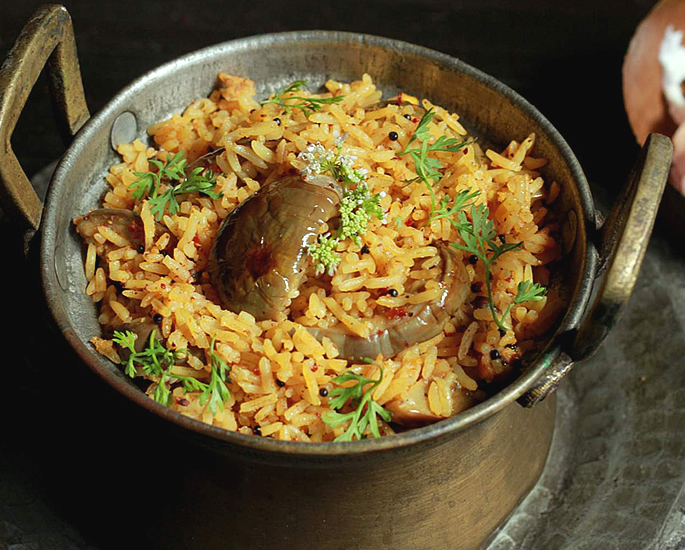 When you think of rice dishes and the city of Mysuru, the first thing that comes to your mind is vaangi bhaat.

The dish’s main ingredient is the bottle-shaped green aubergine and it is commonly found in the region.

It has a rich flavour and manages to stay flavourful without the spices overpowering it especially when readymade vaangi bhaat masala is available in supermarkets.

Vaangi bhaat is ideal alongside raita or poppadoms. 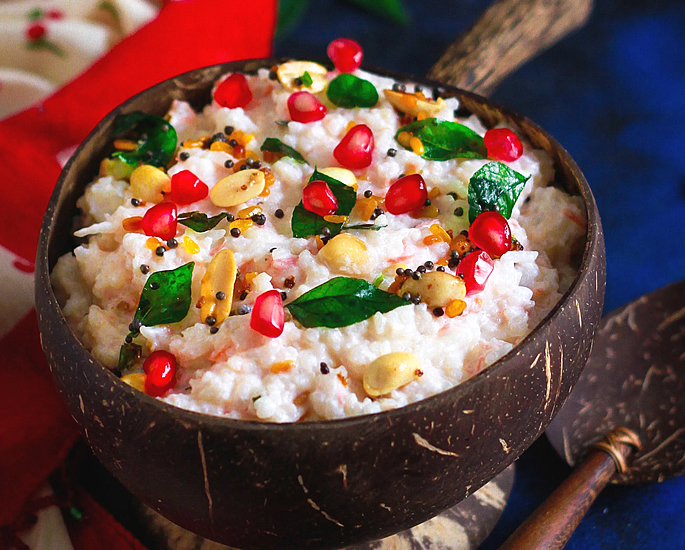 Not only is curd rice easy to make but it is also commonly eaten during the summer months.

While some variations are made with little curd, others use a lot. It all depends on what consistency you want to achieve.

It is pure comfort food with a mild and refreshing taste.

Curd rice soothes the digestive system and boosts the immune system thanks to its source of probiotics (gut-friendly bacteria).

Curd rice also has a rich source of calcium, protein, vitamin A and vitamin D. 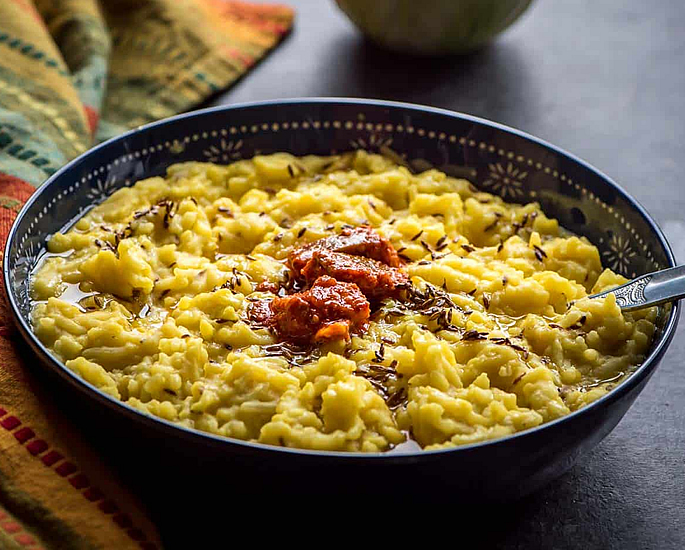 A hugely popular rice dish in India, khichdi is cooked all over the country and is proper comfort food as it can be cooked in one pot.

It is typically made with spices and lentils. Vegetables such as cauliflower, potato and green peas are commonly added.

While khichdi has similar foundations, different regions have their own variations.

For example, in Maharashtra, prawns are added. In Bihar, it is cooked into a semi-paste consistency and eaten with ghee and tomato chutney.

No matter the type, khichdi is a staple dish in India. 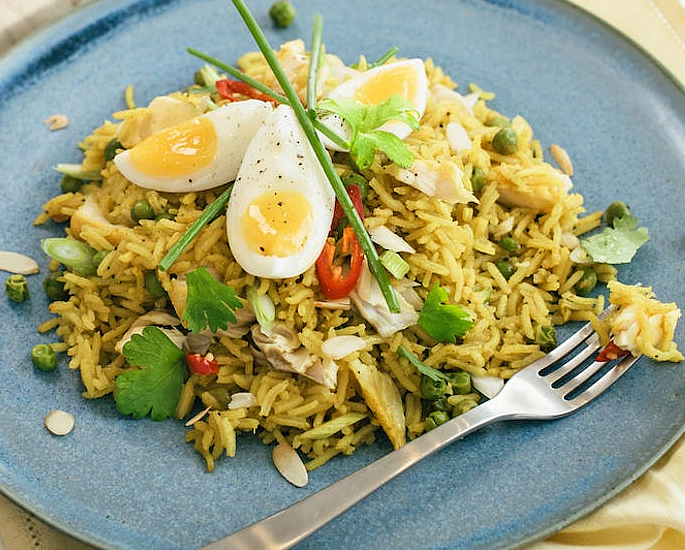 Kedgeree is a dish which was inspired by the traditional khichdi. After khichdi made its way to Britain, kedgeree was created.

While it was created by British colonials returning from India, fish has been incorporated into khichdi in Indian coastal villages.

Haddock is typically used but other fish such as tuna or salmon can also be used. This is a rice dish that can be eaten hot or cold. 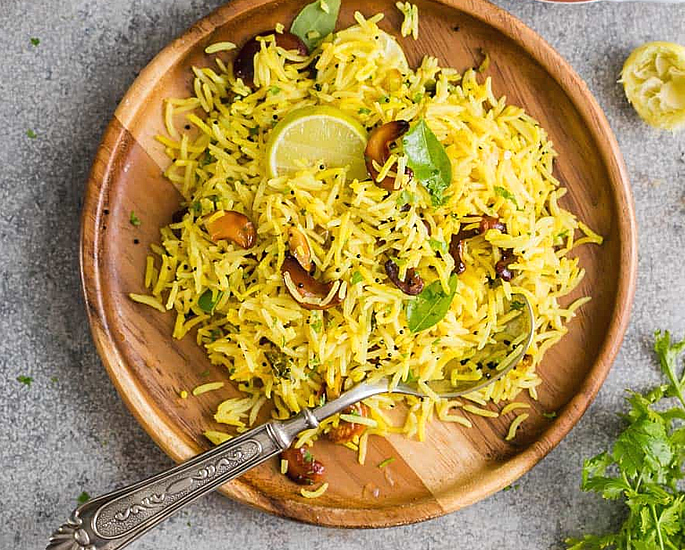 Lemon rice is usually prepared with boiled rice. It is a dish which packs flavour and can be cooked in minutes.

The distinctive yellow-coloured rice starts off with rice boiled with salt and turmeric.

After the excess starch is drained, red chillies, mustard seeds and curry leaves are added to oil in a wok.

Roasted nuts and fenugreek seeds are then added before the steamed rice is gently stirred in.

The finished dish is soft rice with subtle flavours of lemon and the various spices. It may be simple but it is very popular. 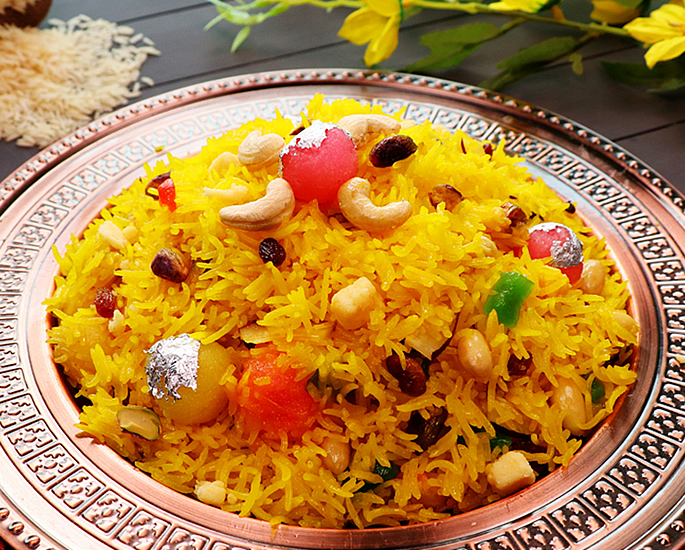 Zarda is a sweet rice dish that dates back to the Mughal era. The name comes from the Persian word ‘zard’ which means ‘yellow’.

The rice is boiled with food colouring, milk and sugar. It is flavoured with saffron, cinnamon and cloves which give off an enticing aroma.

It is a simple dessert that is typically served after a meal.

In most cases, zarda continues to be served on special occasions such as weddings. 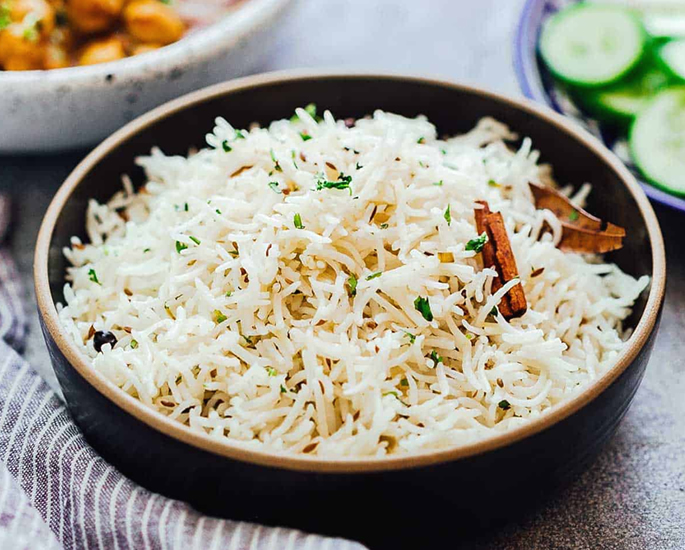 Jeera rice is a very popular North Indian dish. It is so popular that it is a menu item in almost every Indian restaurant.

It is simply rice which has been flavoured with cumin seeds.

The dish may have mild flavours but it is a level above boiled rice. It is typically served alongside meat and vegetarian dishes that are cooked in rich sauces.

This light rice dish is easy to digest and uses minimal oil and ghee to appeal to those who are health-conscious. 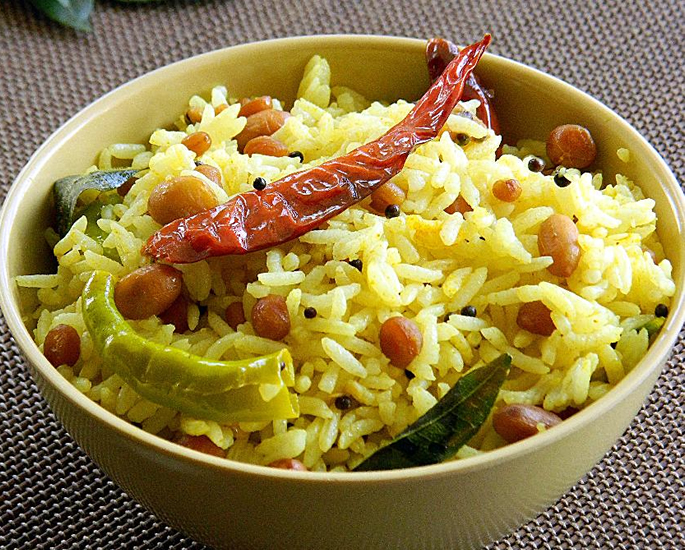 Pulihora or tamarind rice is a speciality of Andhra Pradesh. It is known for its tangy and spicy taste along with the crunchy texture of nuts and lentils.

The use of nuts and lentils enhance the fibre and protein content of the rice dish. Tamarind also has a rich source of antioxidants.

It can be eaten on its own but it tastes so much better with fresh raita or coconut chutney.

Those who go on long journeys tend to prepare pulihora as it will remain fresh for two days. 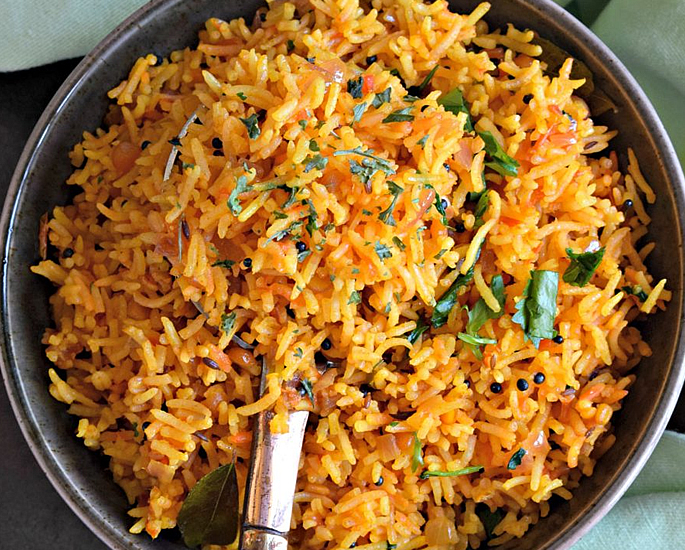 Tomato rice is a popular rice dish which can be made whenever you’re feeling a little peckish.

It is a tangy one-pot meal which can be enjoyed for lunch or dinner.

While it tastes great on its own, raita and chutney is eaten alongside it to provide a unique blend of flavours.

As it is a versatile dish, various vegetables can be added in order to create a filling meal.

It may sound simple but it is a highly enjoyable Indian rice option to go for. 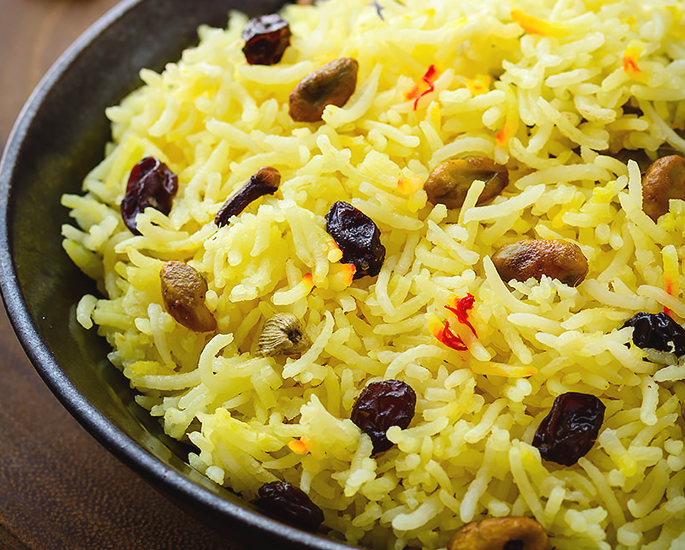 The flavourful ingredients are cooked with basmati rice. When finished cooking, the rice gives off an incredible aroma.

The softness of the rice is intertwined with the slight crunch of the nuts.

It has a mellow sweetness which pairs well with savoury curries and kebabs. 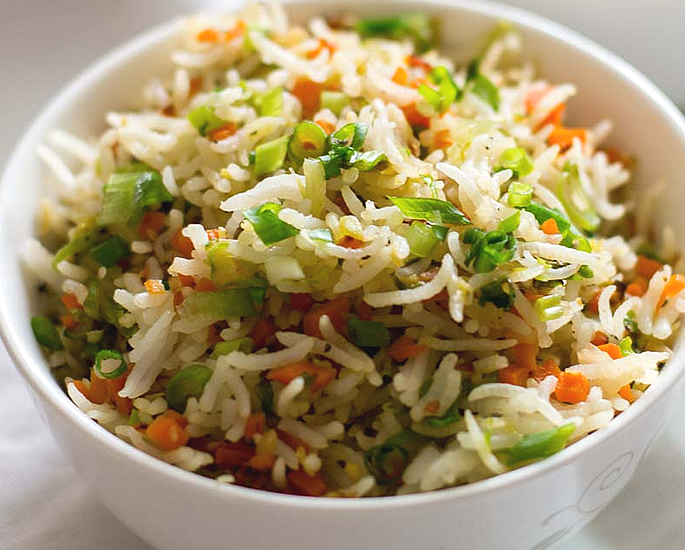 Vegetable fried rice is incredibly popular within Indian cuisine and it is an ideal dish to make when using up leftovers.

It is very versatile, meaning that the only compulsory ingredients are rice and the array of spices. You can use whatever vegetables you like.

The rice is pre-boiled while the vegetables are fried in a wok alongside the spices. The rice is then added and fried for a few minutes before it is served.

This dish ensures that you taste each rice grain as well as the contrasting flavours of each vegetable and spice. 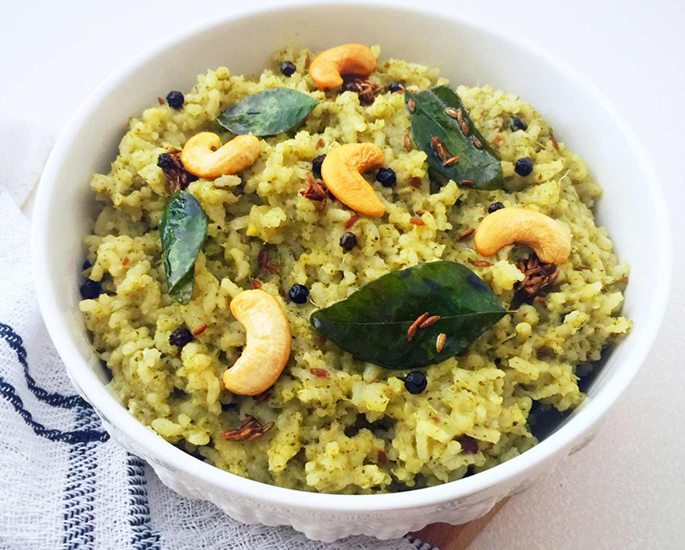 Pongal is popular in the South Indian states of Andhra Pradesh, Tamil Nadu and Karnataka.

It is a rice dish that is typically mixed with boiled milk and sugar.

There are two main varieties of pongal: chakarai pongal and venn pongal.

Chakarai pongal is a sweet dish that is made with jaggery. This gives it a distinctive brown colour.

On the other hand, venn pongal is savoury and it is served as a special breakfast alongside coconut chutney. 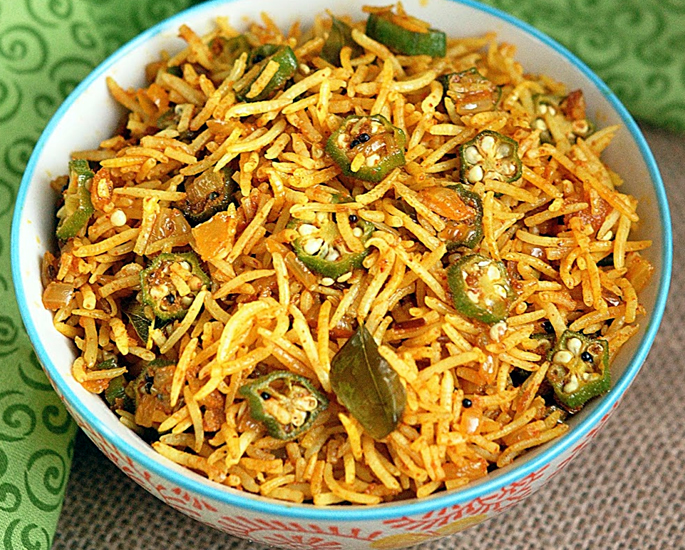 Bhindi (okra) rice is a Chettinad-style rice dish that is known for its tangy and spicy flavour.

It can be eaten on its own or with fresh raita to provide a cooling contrast to the intense spices.

As it is an easy dish to make, various ingredients can be changed according to your taste. For example, you can adjust the level of spiciness.

This vegetarian rice dish has a rich source of vitamin C, protein and magnesium. This lowers cholesterol and boosts the immune system.

These 20 dishes showcase how prevalent rice is within Indian cuisine.

Some dishes are simply flavoured with mild spices while others are elaborate meals with layers of textures and flavours.

One thing for sure is that they are extremely popular in India and across the world.

Image courtesy of Spill the Spice