Okra is a popular vegetable used within Indian cooking but coming up with different recipes can be difficult. Here are seven dishes to try out.

it is also healthy as it is rich in folic acid and vitamin B6.

Okra is a favourite among the South Asian community and is a vegetable they tend to go to when creating a delicious dish.

However, it is a vegetable which is not popular in other regions. One of the reasons is the stickiness in okra which is caused by mucilage.

To get rid of it, wash okra properly under running water then pat dry before cutting.

When it comes to okra dishes within Indian cuisine, one of the most popular is bhindi masala. But sometimes there is a struggle to create other types of okra dishes without compromising the flavour.

These seven recipes feature okra being prepared in unique ways and accompanied by different flavour combinations.

With these recipes, you can enjoy various meals to satisfy your okra craving. 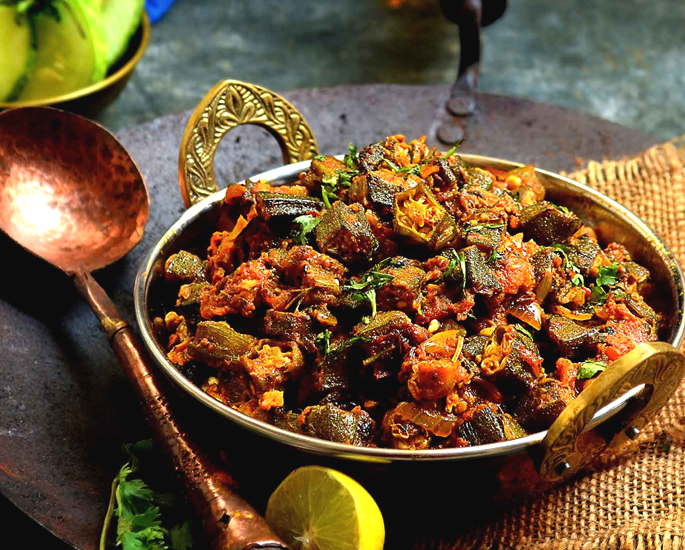 Bhindi masala is arguably one of the most well-known okra dishes within Indian cuisine and it is fairly simple to make.

It is essentially okra which has been fried with an array of spices and tomatoes.

Not only is this dish extremely flavourful, but it is also healthy as it is rich in folic acid and vitamin B6. 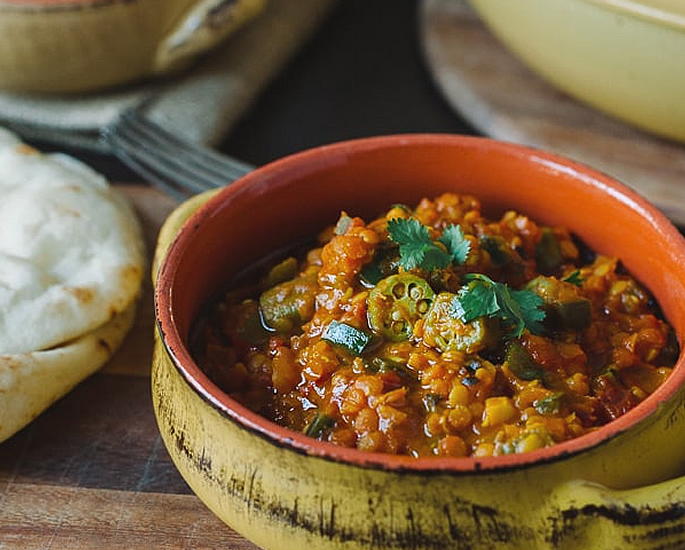 This is a dish that must be made if you are craving a warming and hearty meal.

Tender lentils sit in a thick stew and fragrances of coriander and turmeric are given off while the poblano pepper adds a hint of heat.

The okra is added at the end to ensure it is cooked through but still has a bite.

This recipe was inspired by Kitchen Confidante. 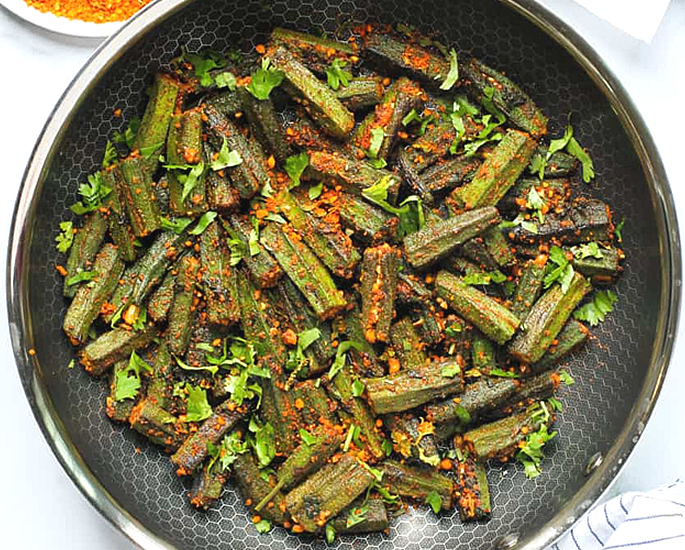 Spicy stuffed okra is a delicious appetiser to have, with a combination of spices and ground peanuts stuffed into fresh slit okra.

It is cooked until crispy and garnished with chopped coriander. This dish is ideal alongside roti or naan bread.

While it will be a mealtime favourite, it is not suitable for people with a nut allergy. For those who want to still enjoy this dish, substitute the peanuts for chickpeas.

This recipe was inspired by Ministry of Curry. 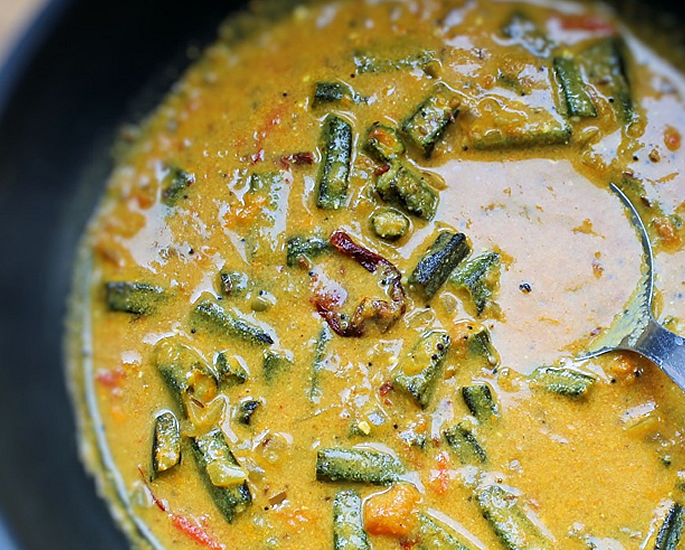 This is an okra dish that is filled with aroma. The okra is gently cooked in a sauce which consists of yoghurt, coconut, cashews and beaten rice (poha).

It may be a dish that is perfect for a cold day, some people may be concerned about the calories.

Low-fat yoghurt and draining the fried okra are two simple measures to take.

It does not subdue the flavour of the dish. It is still an enjoyable okra dish.

For the Ground Paste

This recipe was inspired by Easy Bites Online. 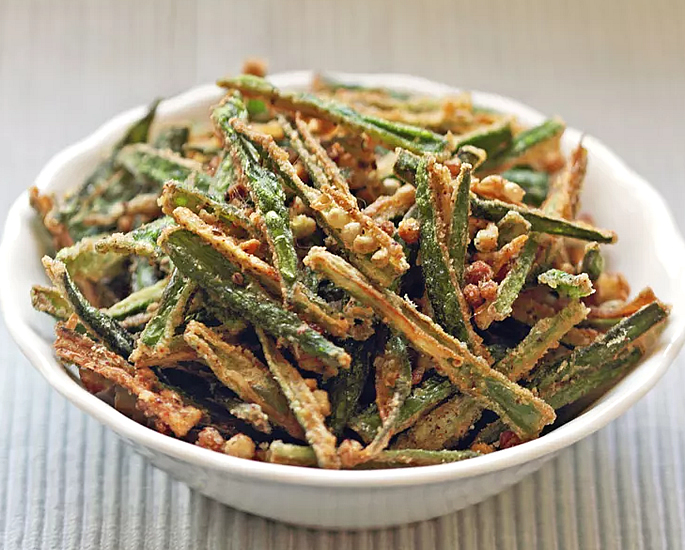 For those who want to enjoy okra as a snack, this recipe is for you.

This recipe uses gram flour as part of a dry batter. It gives the fried okra a slightly nutty flavour.

The carom seeds add an extra level of bite and have subtle notes of anise and oregano. 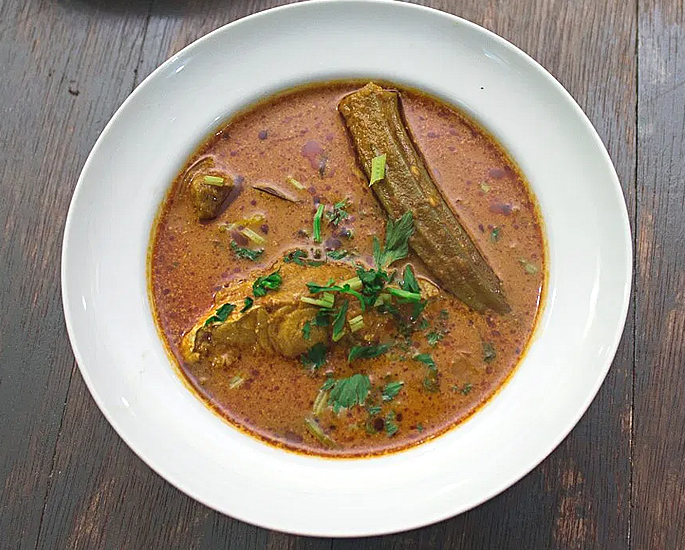 This recipe has been simplified so that it is not time-consuming. Instead of preparing a spice blend and cooking everything separately, this is a one-pot dish.

The result is a filling meal containing tender pieces of fish, soft aubergine and crispy okra.

Salmon is ideal because it is unlikely to break during cooking and will complement the strong curry flavour. If you prefer, swap the salmon for Spanish mackerel steaks.

This recipe was inspired by Roti and Rice. 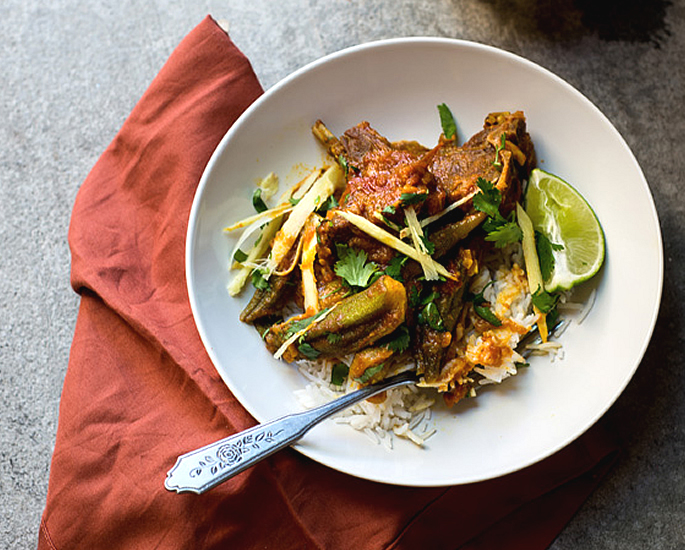 A curried okra and meat dish is true comfort food as it is a simple tomato-based curry with wonderful flavours.

The secret is to add the okra towards the end of cooking to prevent it from breaking down while cooking.

For the meat, you can choose any red meat of your choice. Lamb or beef is perfect.

It surprisingly does not take long to cook as most of the time is needed for the meat to get tender.

This recipe was inspired by Simply Reem.

These seven recipes prove that okra is much more versatile than first suggested.

They are perfect as an appetiser or as a main meal. Whether it is cooked in a sauce or dry, there is a range of okra dishes to try out and these recipes are a step-by-step guide in helping you cook them.