What are the Most Popular Curries to Enjoy?

Within Indian cuisine, curries are the most popular type of food but some are more popular than others. We look at some of the most enjoyable ones.

This Punjab-origin dish provides a balance of flavours.

Curries are by far the most enjoyed element within Indian cuisine.

Whether it be mild or spicy, in a rich sauce or dry, there is something for everyone. They may have originated in India, but their popularity has seen them in all corners of the world.

Curries are the centrepiece in every Indian restaurant where the cooks put their own twist on the original recipe.

Not only are they delicious but they are also versatile. Ingredients can be changed to suit one’s preference. This includes swapping the meat for vegetables if the person is a vegetarian.

They also differ from one another. Each curry offers a range of tastes, textures and even cooking methods, which makes each one unique.

But some are more popular than others. We look at some of the most enjoyed curries in more detail. 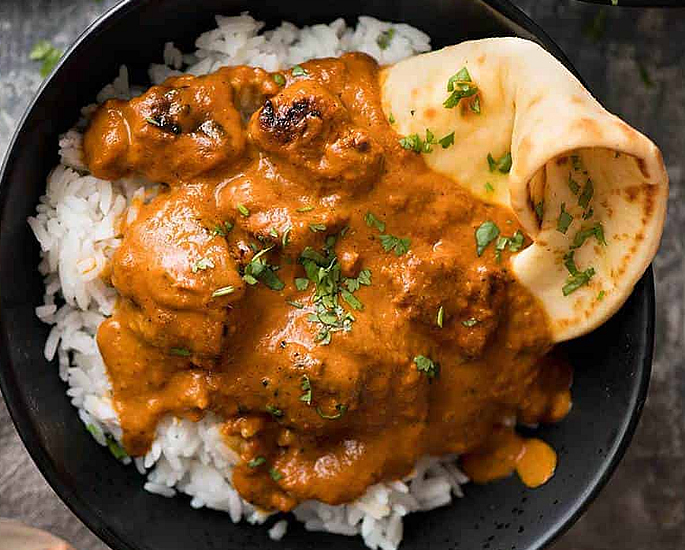 Tikka masala is one of the most popular curries, especially in the United Kingdon.

It is often a ‘go-to’ for diners due to the traditionally cooked and seasoned meat finished with a richly spiced tomato sauce.

This Punjab-origin dish provides a balance of flavours. It features the creaminess seen in mild dishes but intense spices are also prevalent.

The dish consists of boneless pieces of chicken, which have been marinated in spices and yoghurt. The chicken is then traditionally cooked in a tandoor. This gives it a unique smoky flavour.

Meanwhile, a tomato sauce is made with onions, spices and cream. The result is a rich sauce full of flavour.

Its popularity is also down to the fact that it is easy to make at home. 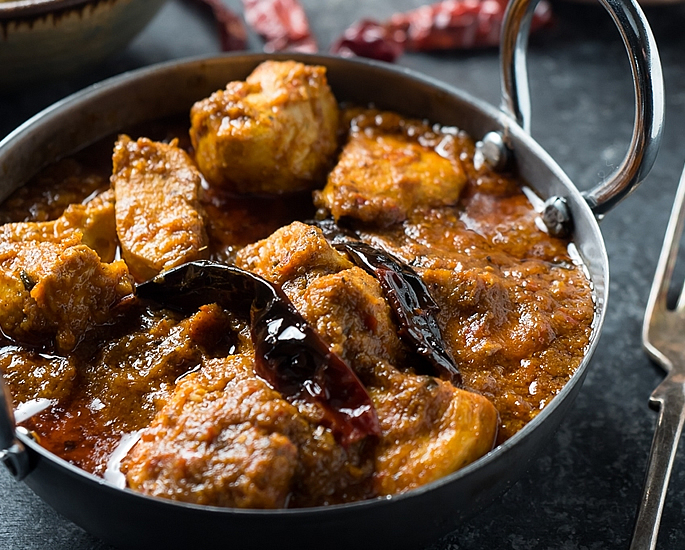 Vindaloo was popularised in Goa and it has gone on to become an iconic curry all over the world.

However, this is not one for everyone as it is one of the spiciest curries available.

Although it is an Indian dish, it actually originated in Portugal and was introduced to India.

It started as a simple dish using wine vinegar and garlic but evolved into a fiery, hot “sweet and sour” style curry. The Indians added dried red chilli peppers along with additional spices.

The original recipe used pork. However, other meats like lamb and beef can also be used. Firmer meats work better than chicken as they take on the intense flavours better.

As there is a lot of chilli powder, it is best avoided if you do not like spicy food.

Vindaloo gained popularity outside of India where it is a menu item in almost every Indian restaurant. 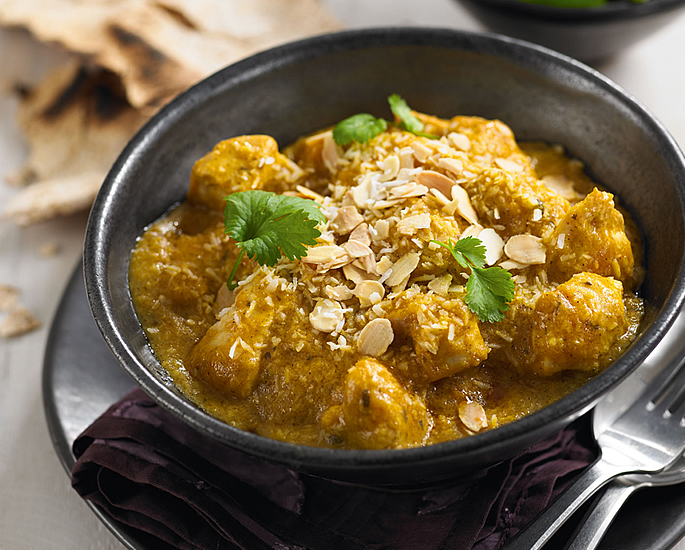 Korma is one of the most popular curries in the world as it particularly appeals to those who are not fans of spicy food.

This rich north Indian curry is commonly made with chicken that has been marinated in a mixture of mild spices and yoghurt.

Typically, flavoursome spices such as ginger, cardamom, cinnamon and cumin are used for the marinade.

Korma differs from most curries because it involves little to no spice. Instead of a rich and spicy flavour that is common within Indian curries, korma holds more of a sweet and creamy taste.

A sauce is made using coconut milk, cream and mild spices, which give off an enticing aroma. Cashews and almonds are included for added texture.

The meat is first seared on high heat, using ghee before it is then subjected to long, slow cooking. The meat remains moist and becomes extremely tender.

Although chicken is typically used, other meats like lamb are suitable or an assortment of vegetables. A vegetarian version is Navratan Korma, which uses nine different types of vegetables. 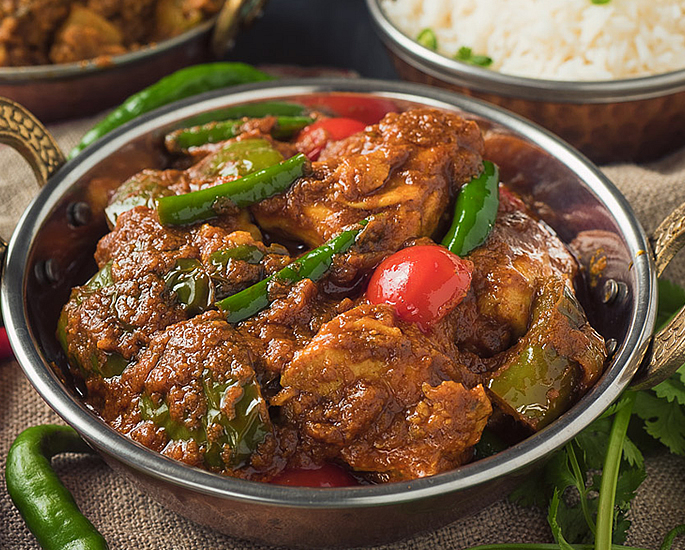 Jalfrezi is also a popular curry in the UK, often more popular than the likes of tikka masala.

Although the true origins of this curry is not known, it is said that it first appeared during the time of British rule in India.

Jalfrezi recipes appeared in cookbooks as a way to use up leftovers by frying them with spices and onions.

Creating a jalfrezi uses Chinese cooking techniques, with a mixture of green peppers, onions and fresh chillies stir-fried to create a base.

The marinated meat of your choice is then added. Tomatoes and various spices are also added.

While a lot of famous curries have a thick, rich sauce, jalfrezi is different. It has a thick sauce but it is dry, meaning that the meat and vegetables are the main attraction.

Usually, before serving, a small amount of thick, spicy sauce is added. It may only be a small amount but that is what makes it one of the hottest curries in Indian cuisine and it is what curry lovers enjoy about it. 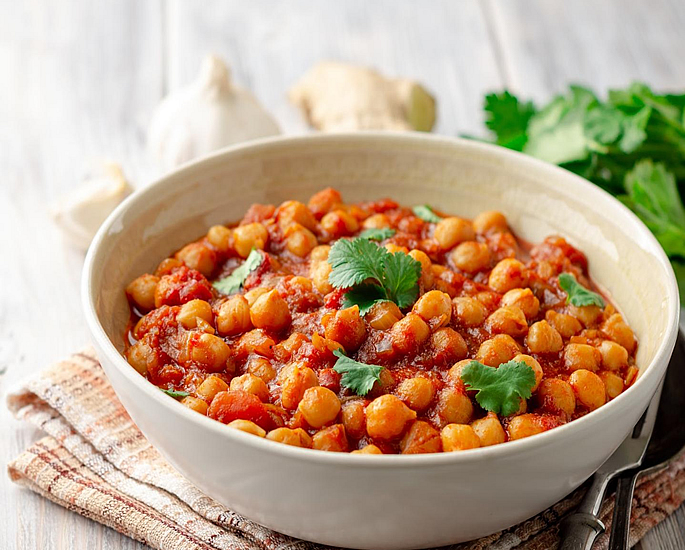 For vegetarians, one of the most popular curries is chana masala. Also known as chole, the main ingredients are chickpeas.

It is cooked in a tomato sauce with onions and loads of spices like garlic, ginger, chillies and sometimes dried mango powder. This gives it a slightly tangy flavour.

Not only is this dry and spicy curry delicious but it is also good for you as it contains iron, fibre and vitamin B.

The dish is very versatile and can be eaten as a main meal or as a snack.

The bread is light and crispy while the curry is warming.

The bread is dipped into the intensely spiced chickpeas. It is a mixture of textures as the chickpeas are soft, yet they keep their shape and the bread has a slight bite to it.

It has a wide spectrum of flavours and textures, which make it a popular curry. 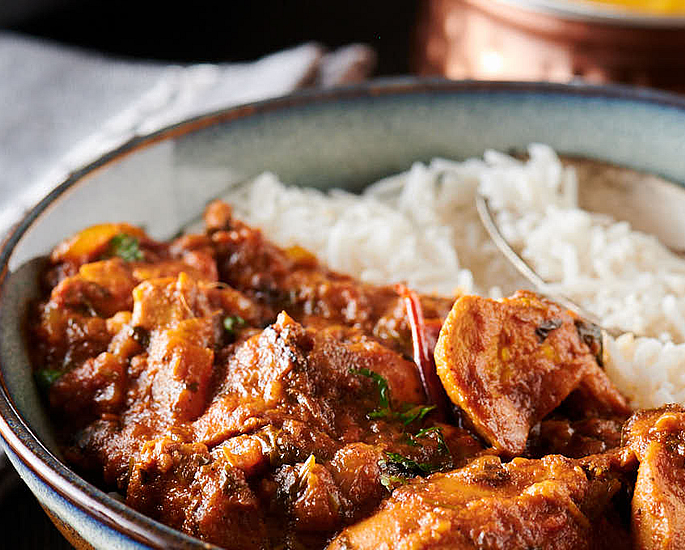 A bhuna has a unique cooking process where spices such as turmeric, chilli powder, cumin and ginger are gently fried in oil to bring out their flavour.

Meat is then added to the spices and is left to cook in its own juices.

A traditional bhuna follows this method in order to create deep flavours but with very little sauce.

As it garnered popularity, different cooking methods were employed.

In a restaurant, it is likely that a bhuna will be served accompanied by a thick sauce made with tomatoes, onions and red pepper.

It is commonly a hot curry as fresh green chillies are used without any use of cream or yoghurt. However, some variations may be hotter. 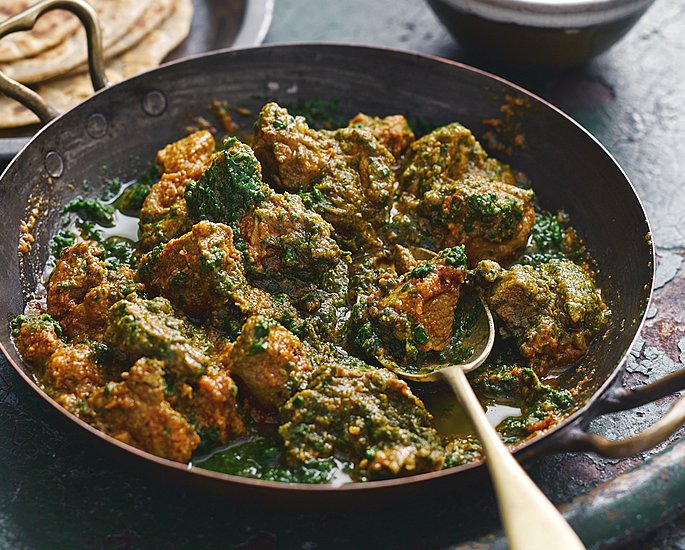 Saag gosht is a classic curry that is traditionally made with spinach and lamb.

Saag gosht literally translates to meat in leafy vegetables but is commonly used to mean a pureed spinach and lamb curry.

Saag is a general term for green leaves like spinach, mustard greens and fresh fenugreek leaves.

Although boneless lamb can be used, it is best recommended to have this curry where the lamb is on the bone as the meat becomes much more tender and does not dry out.

It is typically made with lamb but due to its popularity, many restaurants will offer a chicken or prawn alternative. So the dish usually omits the gosht (lamb) from the name on the menu.

The dish has quite a balanced flavour and is made similar to how a bhuna is made. 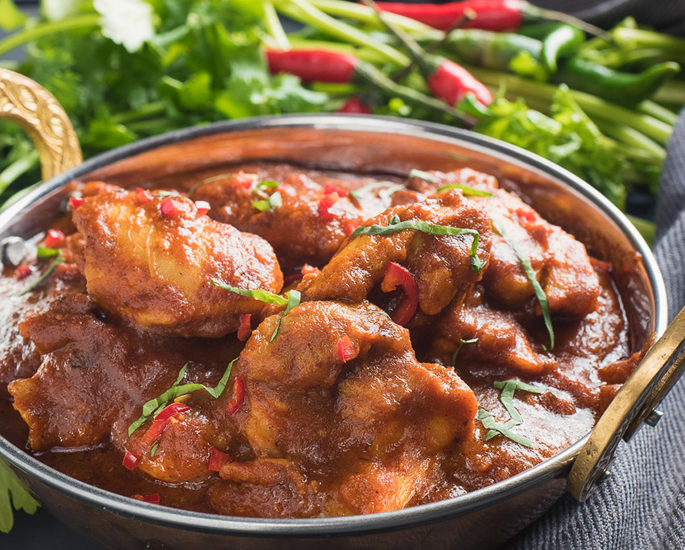 Madras is said to originate from the south of India and gets its name from the city of Madras, now named Chennai.

But the actual curry was invented by Indian restaurants in the UK as a hotter version of the standard curry to please more diners.

As it is not a traditional dish, the flavours and consistency can vary from place to place.

Madras tends to be made with beef, but lamb and chicken are also common.

It is served in lots of sauce and has a distinctive red colour. Chilli powder, garam masala, cumin and turmeric give it a fragrant and fiery taste.

Other versions include dry roasting spices like coriander seeds, dried chillies and cinnamon for extra flavour.

This hot curry is usually served with fresh raita to take away some of the heat.

It may not be a truly authentic curry but it is highly enjoyed. 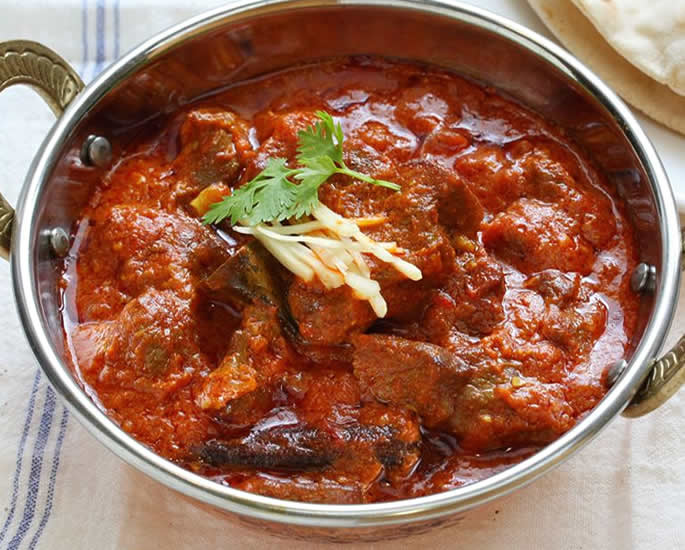 The delicious Rogan Josh is one of the best curries and easiest to try. It is a staple of Kashmiri cuisine and was introduced there by the Mughals.

It has a unique blend of spices, which make it extremely popular.

Rogan Josh consists of pieces of lamb or mutton slow-cooked in a thick gravy, which is flavoured with garlic, ginger and aromatic spices. Some versions include yoghurt.

The first thing, which hits you is the aroma of the spices used to cook the meat.

The dish has a deep red colour, which is one of the main characteristics. This comes from generous amounts of dried, deseeded Kashmiri chillies.

Even though a lot of chillies are used, Kashmiri chillies are far milder and the recipe emphasises aroma rather than heat.

When considering the meat, it is extremely tender and it soaks up the rich sauce to give it a burst of flavour.

It is a mouthwatering dish that is one of India’s most popular curries.

Different tastes and textures are what make curries unique from any other type of food. It is also what makes them so popular.

There is something for everyone and as more people are willing to experiment with flavours, new and exciting taste combinations will come to fruition.

Dhiren is a journalism graduate with a passion for gaming, watching films and sports. He also enjoys cooking from time to time. His motto is to “Live life one day at a time.”
What Ingredients Do You Use to Make a Curry?
Akshay, Twinkle & Malaika join ‘What’s In Your Dabba’ Challenge