7 Vegetarian Curries You Must Eat

Indian cuisine is famous for its colourful and culinary delights. Especially true, when choosing these gorgeous vegetarian curries in Indian restaurants.

Indian cuisine is known for its vivid flavours and colours.

Indian cuisine is known for its rich flavours and vivid colours. And this is particularly true for Indian vegetarian curries.

Most Indian and South Asian restaurant diners are familiar with baltis, kormas, and jalfrezis. But there are a host of unearthed gems on the menu which do not get the same attention.

Herbivores, however, have known about these delicious dishes for a long time.

Some would argue that vegetarian dishes are more authentic and traditional as examples of northern Indian and Pakistani cuisine. 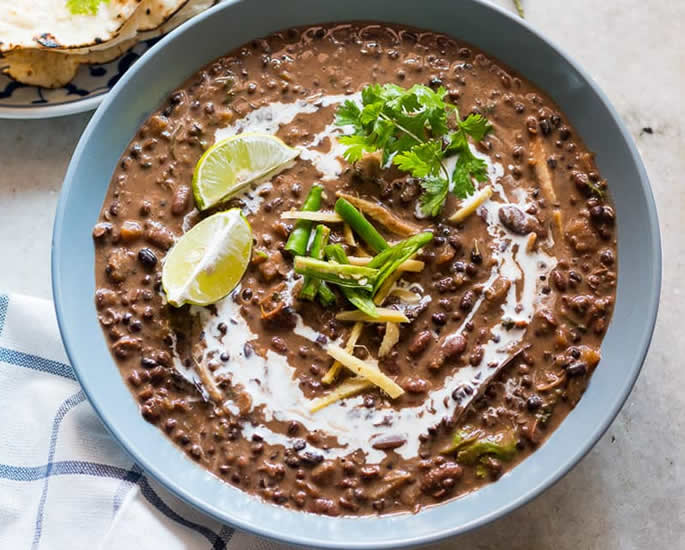 ‘Daal Makhni’ means ‘buttery lentils’. As such, it is known for its creamy consistency and rich texture due to being cooked with butter and sometimes finished with some cream.

There are many types of lentils, and the type used in daal makhni is whole black lentil (urad dal).

Daal makhni originates in Punjab where it is a staple. The movement of Punjabis to all parts of India after partition, and of the diaspora to the UK, US, and Canada, has made the dish widely known in Indian cuisine.

It is a versatile dish which can either be served as the main meal, a side dish, or as part of a buffet.

In India, it is often consumed on special occasions such as birthdays, weddings, religious celebrations, and national holidays.

Like most daals, daal makhni goes well with rice. But if you want to eat like a traditional Punjabi, go for a brown wholemeal earthy roti, cooked on either the tava (skillet) or in the clay tandoor oven. 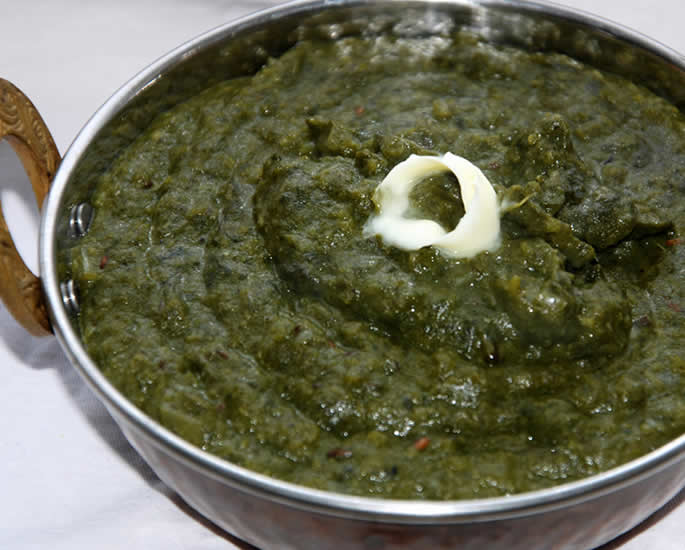 Saag is an Indian curried stew made of green leaves such as spinach, mustard leaves, collard greens, and basella.

It is hailed as one of the king-like dishes when it comes to vegetarian curries.

Many Punjabi households in the UK also often include broccoli and spring greens in their home-cooked versions.

In some restaurants, saag is made primarily with spinach, with the other ingredients given less importance or not included at all. It is usually topped with clarified butter (ghee).

In Indian restaurants, you may find either, or both, saag aloo (saag with potatoes), or saag paneer (with a mild tasting and rich Indian cheese). Both of these are delicious in their own unique way.

It can be eaten with naan or roti. It is not common to eat saag with rice, although it is eaten with rice in the eastern Indian states of West Bengal and Odisha.

In Northern India, saag is eaten with Makki di roti, a thick roti made from corn flour, and yellow in colour. 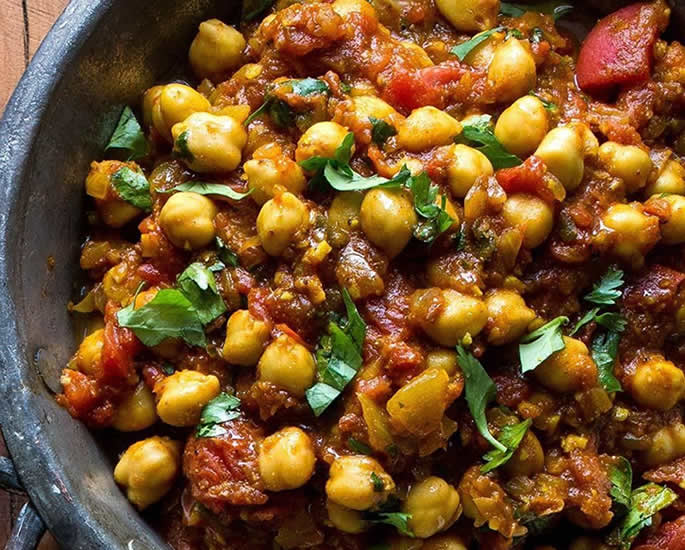 On restaurant menus, it will be called channa masala, but Punjabis themselves are more used to calling it cholay.

It can be dry or saucy. In India and Pakistan, it is sold as a snack in dhabas (Indian diners), and as street food. In these settings, it is often sold with bhature, a type of fluffy white fried flatbread.

Like any good curry, along with the chickpeas, the ingredients include onion, chopped tomatoes, coriander seed, garlic, chillies, and ginger, which give it the authentic taste of a North Indian curry. 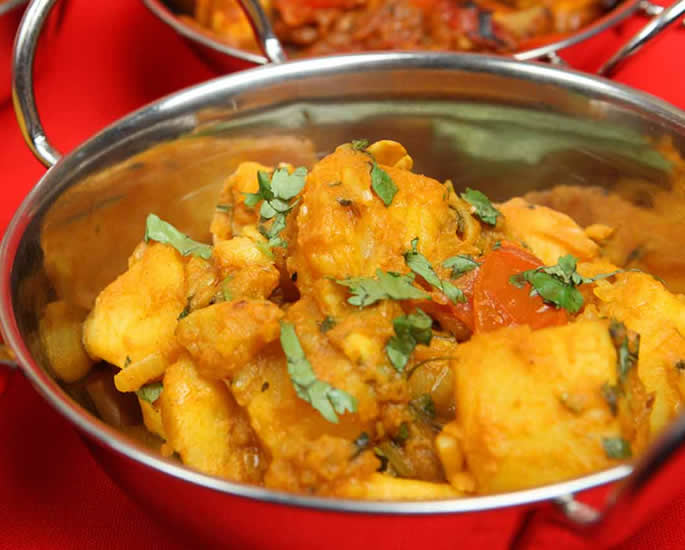 Bombay aloo is the perfect side dish which compliments almost everything on an Indian restaurant menu which feature vegetarian curries.

It will go well well with any vegetable or legume curry. For those of you non-vegetarians, it is great to go with your meat dishes.

The sauce can vary in consistency but is usually on the drier side.

Potatoes are a staple for many in India. Bombay aloo turns the humble ‘tater’ into a sexy, silky, smooth treat. 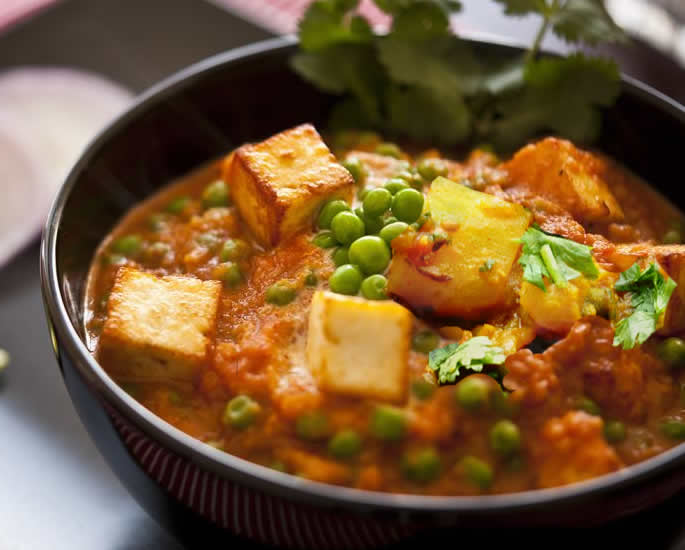 Like many of the dishes featured here, this dish takes one of the most ordinary and blandest of vegetables, the garden pea, and turns it into a gorgeous dish.

Aloo mattar (potatoes and peas) is a popular curry amongst all sections of North India. Paneer, being a more expensive delicacy, means that aloo mattar paneer is usually prepared for special occasions. 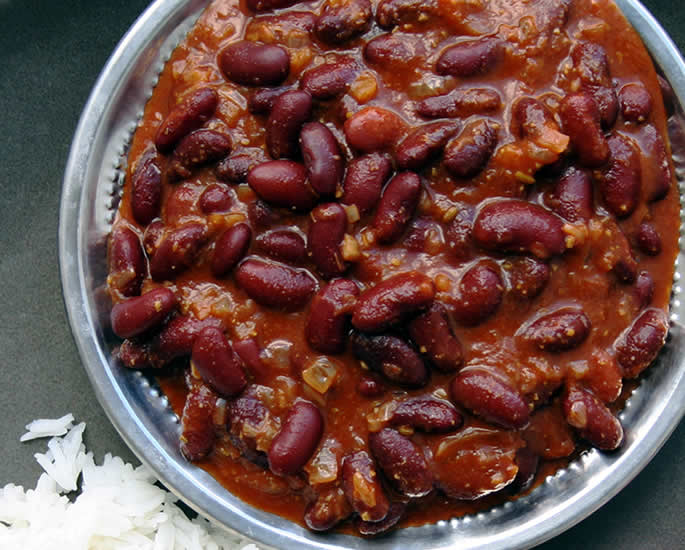 Rajma consists of red kidney beans in a thick, spicy tomato-based sauce. The base of the sauce is made with onion, garlic, and many spices.

It goes well with naan, roti, or rice. In North India, rajma-chawal (rajma and rice) is a popular dish.

Like daal and other legume-based vegetarian curries, Rajma is a staple food in North India, particularly Punjab, as well as being appreciated as a delicacy for special occasions.

However, the kidney bean is not of Indian origin and was actually brought to India from Portugal during the Age of Discovery. 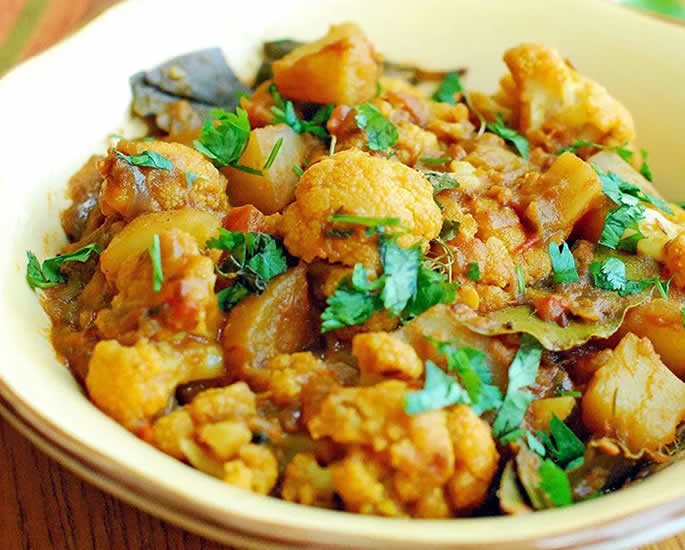 One of the many tastes that vegetarians appreciate more than your average carnivore, is that of the cauliflower. Many Punjabis and North Indians are fond of their gobi.

Aloo gobi is usually a dry dish made from potatoes and cauliflower. Its sumptuous taste comes from the use of ginger, garlic, onions, and cumin seeds. The liberal use of turmeric gives it its yellow colour.

Being on the dry side for a curry, it will match better with a roti (either tawa or tandoori) or a naan, rather than rice.

If you are a vegetarian these are an array of delectable dishes for you to try.

For those of you who prefer meat, you could choose one of the above as a side dish.

Prepare to be pleasantly surprised at the depth of taste that you experience with these incredible tasty vegetarian curries.

Harvey is a Rock ‘N’ Roll Singh and sports geek who enjoys cooking and travelling. This crazy guy loves to do impressions of different accents. His motto is: “Life is precious, so embrace every moment!”
Indian food banned at St George’s Day event
Cooco’s Den in Lahore’s old Heera Mandi