15 Foods High in Omega-3 which You Must Eat

When it comes to diet, foods high in nutrients, such as omega-3, are key to a healthy lifestyle. Here are 15 foods which you must eat.

Salmon is one of the most nutrient-dense foods

In order to lead a healthy lifestyle, one must have a diet that is packed with nutrients. This includes foods that are rich in omega-3.

Omega-3 fatty acids are a type of polyunsaturated fats with various benefits for the body and brain.

They are referred to as ‘essential fats’ but they cannot be made in the body. Therefore, they have to be obtained through diet.

The main omega-3 fatty acids are:

Thankfully, they are easily obtainable through different foods. Here are 15 foods that are high in omega-3. 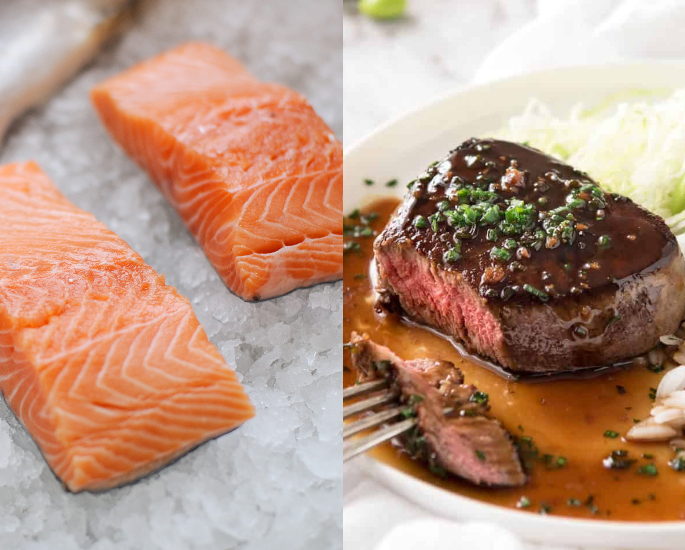 Salmon is one of the most nutrient-dense foods on the planet, containing large amounts of vitamin D, and B vitamins.

It is also high in omega-3, specifically DHA and EPA.

Fresh salmon does not usually contain ALA, but canned salmon can have up to 0.04 grams in addition to the other omega-3 fatty acids.

In half a fillet of cooked, farmed Atlantic salmon, there is around 4,123 milligrams of omega-3.

Herring is a medium-sized, oily fish that is typically cold-smoked, pickled or pre-cooked, then sold as a canned snack.

In some countries, smoked herring is a popular breakfast dish.

But like other types of fish, it is high in omega-3.

In addition, a standard smoked fillet contains almost 100% of an adult’s recommended daily intake (RDI) for vitamin D and selenium and 221% of the RDI for vitamin B12.

Compared to grain-fed cattle, grass-fed cattle produces beef that is higher in omega-3.

In a six-ounce piece of ground, raw beef, it has 149 milligrams of omega-3, which is predominantly ALA.

While the omega-3 content is lower than other foods like salmon, it is four times higher than grain-fed animals, according to a Nutrition Journal review.

This is because cattle walk around in fields eating things like flax and purslane.

Shellfish are a good source of omega-3s because they tend to contain ALA, DHA and EPA.

This includes the likes of oysters, lobster and scallops.

When considering oysters, they are highly nutritious. Just 85 grams of oysters contain 293% of the RDI for zinc, 70% for copper, and 575% for vitamin B12.

You can get your omega-3 fix at any time of the day when eating oysters as they can be enjoyed as a snack or as a whole meal.

Anchovies are tiny, oily fish that is often bought dried or canned.

Because of their strong taste, they are used as toppings on foods such as pizza. They are also used to flavour many dishes and sauces. 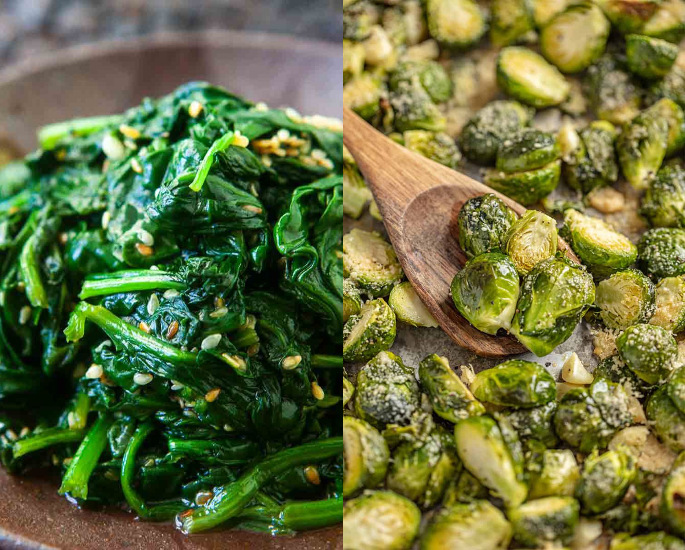 This leafy green vegetable is an ideal food to eat if you are looking to increase your omega-3 intake.

A cup of raw spinach contains 41mg while a cup of cooked spinach has 166 mg of omega-3.

It is also rich in nutrients like vitamin E and betaine and choline, which work together to turn off fat-storage genes.

Spinach is a vegetable that can be incorporated into salads and curries, making for an easy way to obtain omega-3.

Brussel sprouts may not be a popular vegetable, but they are rich in omega-3 fatty acids, specifically ALA.

Including a few servings will help manage your omega-3 needs.

If you do not like the texture, roast them to give sprouts a crunchiness on the outside and soft centre.

Winter squash is the name given to several squash species. It differs from summer squash in that it is harvested and eaten in the mature stage.

This is when the seeds within have fully matured and the skin has hardened into a tough rind.

In terms of omega-3, they are a great source. One cup of hubbard squash contains 332 mg of omega-3.

Winter squash is also great for weight loss, with one cup providing a third of the RDI of vitamin C, a nutrient related to the body’s ability to burn fat. 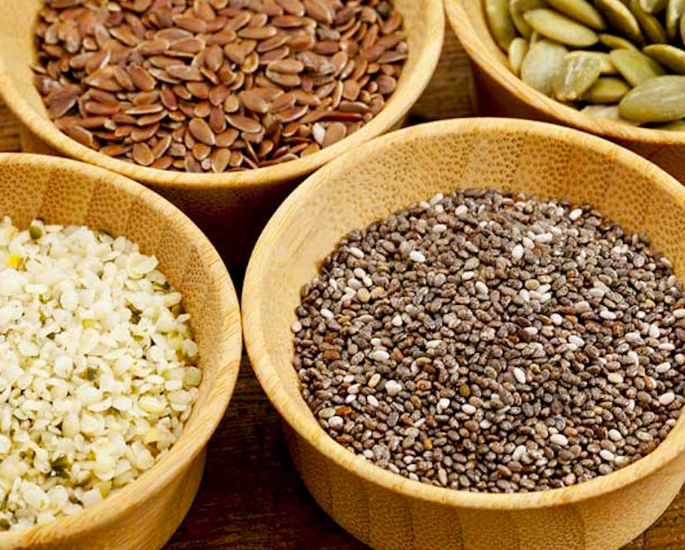 Flax seeds are small brown or yellow seeds. Typically, they are ground, milled, or used to make oil.

Compared to other foods, flax seeds are the richest whole food source of ALA omega-3 fatty acids.

As a result, flaxseed oil is often used as an omega-3 supplement.

Flax seeds are also a good source of fibre, magnesium and other nutrients.

For those who do not like flax seed’s nutty taste, chia seeds are a great alternative.

Chia seeds contain high protein and fibre levels, making them an excellent option for those on a plant-based diet.

Compared to other nuts and seeds, walnuts have the highest omega-3 content, with around 2,570mg per 28 grams.

Not only are they high in omega-3 but they are also high in disease-fighting antioxidants.

According to a study, this combination protects against heart disease.

Other benefits include helping reduce blood pressure and decrease inflammation in the blood vessels during times of stress.

Walnuts are also loaded with copper, vitamin E and fibre.

Incorporate into a salad or eat a handful as an afternoon snack.

Mustard seeds may be small but they pack a lot of omega-3.

One tablespoon of ground mustard seeds provides 239mg of omega-3.

They have fat-burning qualities. Scientists at England’s Oxford Polytechnic Institute found that a teaspoon of mustard seeds were enough to boost metabolism by up to 25 per cent for several hours after eating.

The weight loss benefits are attributed to allyl isothiocyanates, compounds that give the mustard its characteristic flavour. 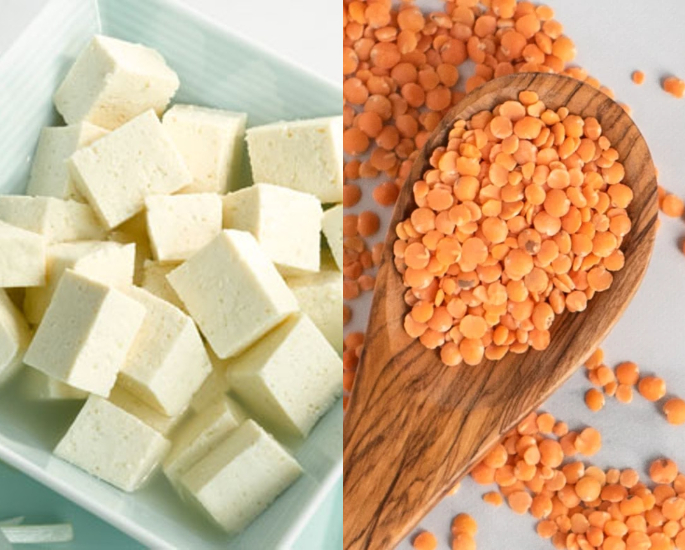 Tofu is made from soybeans and is a great source of plant-based protein, making it suitable for vegans.

It also has the potential to contribute to weight loss.

It is also very high in omega-3, especially if it is firm tofu, containing 495mg per 85 grams.

However, it does have a reputation for being bland, so make sure to add to stir fry and curries for a delicious and nutritious meal.

Wild rice is an interesting option because it is not rice at all. It comes from an ancient aquatic grass.

Compared to brown rice, wild rice has nearly double the fibre and protein, as well as fewer calories. This makes it a great food for weight loss.

This amazing food is also made up of around 30% omega-3 fatty acids.

In one cup of cooked wild rice, it contains 156mg of omega-3. Eat instead of white or brown rice to see the nutritional benefits.

Red lentils are a cheap pulse that tastes great in a number of dishes.

Containing 240mg of omega-3 per half a cup (raw), lentils are a rich source of omega-3.

They are also great for boosting fat metabolism and regulating appetite.

Researchers say the slimming benefits can be attributed to resistant starch, a form of slow-digesting fibre that triggers the release of acetate, a gut molecule that tells the brain when it is time to stop eating.

This is just a selection of foods that are rich in omega-3.

Other foods include mackerel, eggs and hemp seeds.

There are many foods that contain omega-3 but ultimately, it is a matter of what you like to eat.

So, if you’re looking to increase your omega-3 intake, these are the foods to eat.

Dhiren is a journalism graduate with a passion for gaming, watching films and sports. He also enjoys cooking from time to time. His motto is to “Live life one day at a time.”
Mowgli Street Food to expand during 2021
Mother-in-Law inspires Engineer to launch Food Business