Edible Insects which You Can Buy and Eat

A growing food trend is edible insects. More and more people are eating them. We look at some products and the legalities with it.

"our snacks have the right crunch and flavour"

Edible insects are the growing trend when it comes to snacks albeit a strange one for many.

However, it is common, especially in countries like India and China where different species are eaten based on the differences in environment, ecosystems and climate.

It is estimated that the number of edible insect species consumed globally range from 1,000 to 2,000.

The practice of eating insects has now gained ground in Western countries where they are mass-produced, specifically for human consumption.

In many cases, insects have been processed into a non-recognisable form, such as dry roasted or as powders.

Not only have insects found to be highly nutritious but they are sustainable for the environment. Compared to chickens and cows, insects take up far less land, water and need less feeding.

As it is such a growing trend, we look at some edible insect products as well as the concerns that come with eating insects. 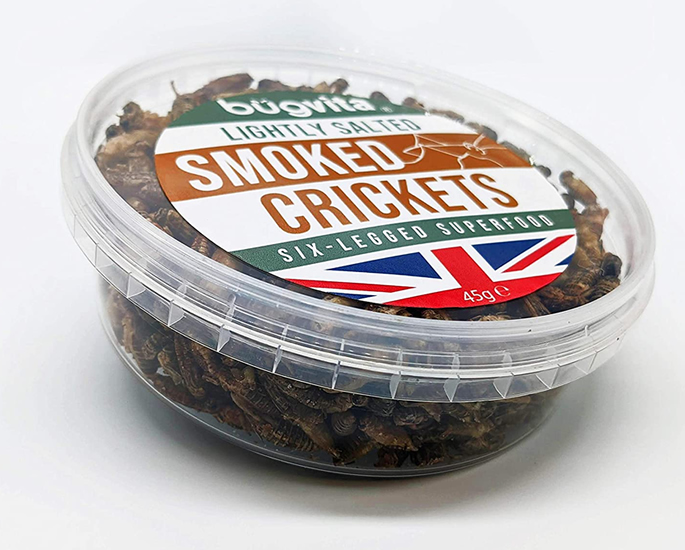 Bugvita Whole Roasted Crickets are farmed in the UK and fed a 100% certified organic diet.

These edible insects are one of the most sustainable sources of complete protein on the planet, at 70%. Compared to beef, pork or chicken, crickets require less feeding, water and land.

They are also incredibly healthy, containing all 18 amino acids in a highly digestible form.

Whole roasted crickets have a mild savoury flavour that is similar to toasted nuts, meaning that those who are hesitant to eat them may be at more ease after hearing that.

Not only can they be eaten on their own as a snack but they can also be added to dishes as a protein substitute. 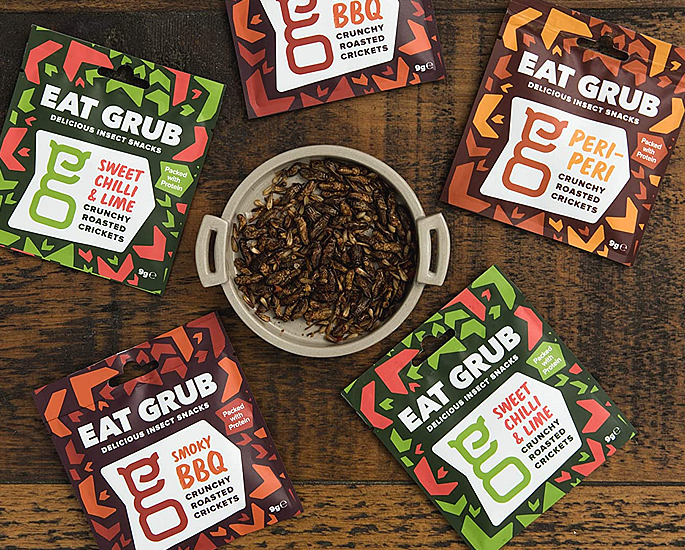 Eat Grub is perhaps the UK’s most well-known manufacturer of edible insects. Not only do they specialise in crickets but they also offer grasshoppers, mealworms and buffalo worms.

The company say: “Carefully roasted with a beer in mind, our snacks have the right crunch and flavour to make them the perfect pair.”

These edible insects are roasted with natural herbs and spices to ensure that every flavour is tasted.

Eat Grub offers a variety of flavours similar to those typically associated with crisps. Flavours include peri-peri, sweet chilli and lime, salt and vinegar, salted toffee and smoky bbq, making for a unique snack.

In terms of nutrition, crickets can reach up to 75g of protein per 100g. Crickets are also rich in iron, calcium, omegas 3&6, zinc, magnesium, and vitamin B12.

They are also a good source of fibre.

This insect food brand is number one in the UK and not only are they trying to encourage people to eat insects due to their taste but also for the good of the environment. 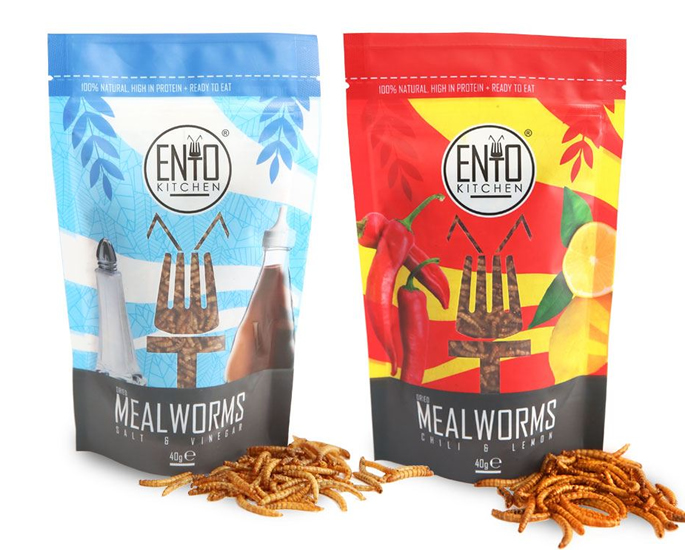 EntoKitchen is another UK-based company that strives to get more people eating insects.

Like Eat Grub, their products come in a variety of flavours. But mealworms are the speciality.

EntoKitchen say that eating insects, or entomophagy, will be part of a more sustainable future.

Like crickets, mealworms are high in protein and fat, meaning they are good for consumption.

Dried mealworms contain around 53% protein and 28% fat as well as six per cent of fibre.

Dry roasted mealworms are perhaps the best way to eat them as they are least recognisable this way. It is a good way to store excess mealworms.

They do not take up much space and can last up to a year without being refrigerated.

This method of cooking removes the moisture while keeping much of their protein and nutritional value.

While they can be eaten on their own, mealworms can also be salted, sprinkled on salads and added to soup.

They can even replace nuts when making cookies or cakes as they taste a lot like peanuts. 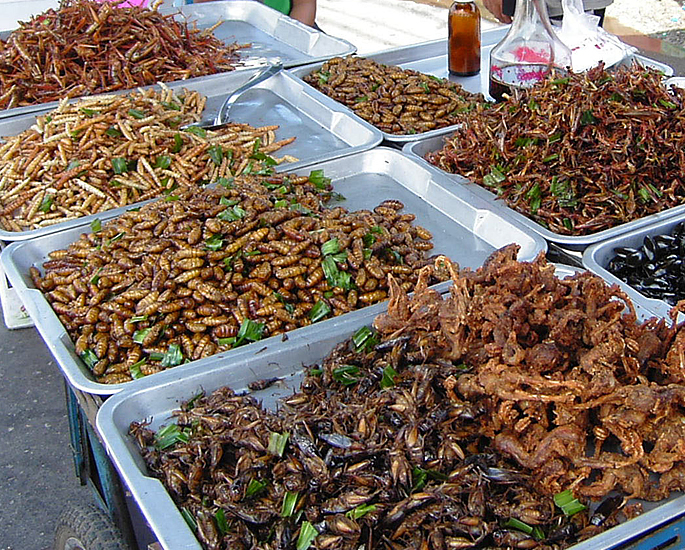 While edible insects are readily available, there are some potential challenges caused by production and safety concerns.

Mass production in the insect industry is a cause for concern due to a lack of technology and funds to efficiently harvest and produce insects.

The equipment would have to house proper enclosure for each life cycle of the insect as well as the temperature control. This is because it is key for insect development.

The shelf life of insects in comparison to animal products also has to be considered as some insects can present food safety concerns.

Insects are capable of accumulating potential hazards, such as pathogens, allergens and pesticides, to name a few.

However, hazards in edible insects like crickets and mealworms can be controlled in different ways.

One way is that allergic hazards can be labelled on the packaging to avoid consumption by allergy susceptible consumers.

Another method is that selective farming can be used to minimise chemical hazards while parasitical hazards can be controlled by cooking processes. 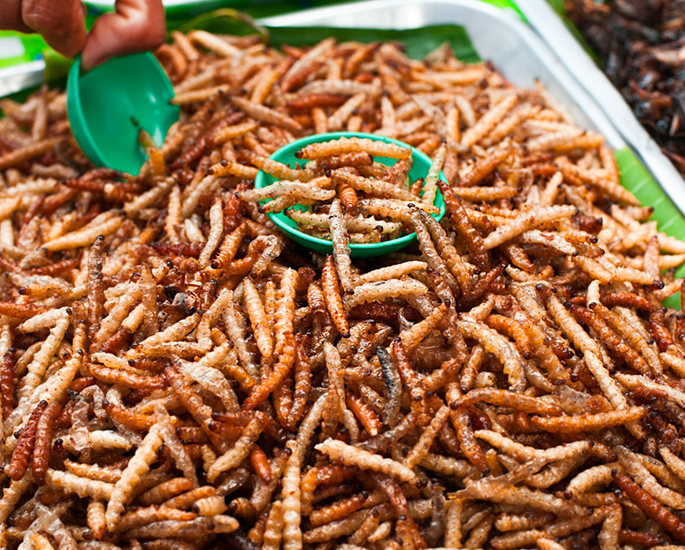 The consumption of insects is still a fairly new thing, especially in the West. As a result, it is rarely regulated.

This leads to food agencies, customs and health departments often finding themselves helpless in the face of new product development based on processed insects.

In terms of geography, there are three legal trends.

Countries like the UK, USA and Australia do not see edible insects as a novel food, but the food agencies have authorised import and sales.

In the USA, there is no specific set of standards for edible insects.

The Food and Drug Administration (FDA) has stated that to be allowed for the market, the insects must have been bred for human consumption.

Labels must have the insect’s scientific name as well as their common name. Potential risks of allergy must also be noted.

Importation from other countries is permitted.

In the UK, the Food Safety Agency has favoured the idea of the selling and consumption of insects.

However, Brexit has made the future uncertain. But it is most likely that insects will be allowed to keep on being sold on the market.

In particular, the European Union has felt the need to have rules and provide approvals before allowing the marketing of insects.

However, in April 2020, the insect industry expected the EU’s European Food Safety Authority to endorse whole or ground insects like crickets as being safe for human consumption.

At the time, Christophe Derrien, the secretary-general of the industry organisation International Platform of Insects for Food and Feed, said:

“These have a good chance of being given the green light in the coming few weeks.

“They are taking the necessary time, they are very demanding on information, which is not bad.

“But we believe that once we have the first novel food given a green light from EFSA that will have a snowball effect.”

For some time, the potential for edible insects was held back by a lack of EU-wide approval.

Belgium, Denmark and Finland took a permissive approach to a 1997 EU law that requires foods not eaten before that year to get novel food authorisation.

Those national regulators decided that the law did not relate to animals used for food. Subsequently, many insect-based products can be found in Belgian and Finnish supermarkets.

However, edible insects are banned in France, Italy and Spain.

In 2018, a new EU law sought to bring some clarity. It stated that insect-based dishes would also require novel food authorisation.

A transition period was established to allow companies already producing insect-based food to operate until they received a judgment on the safety of the species they work with and final approval by the EU’s institutions.

Derrien added: “We have many of our members building bigger factories because the key to success is to upscale your companies and produce on a mass scale. And this is already happening.

“We are expecting the next few years will be very interesting ones and obviously the novel food authorisations will definitely help.”

“The sort of foods ranges from whole insects as an aperitif or as snacks to processed insects in bars or pasta or burgers made out of insects.

“We believe that insects for food is one solution for some of the biggest challenges we are facing on the planet.”

“In the context of scarce resources, and insect production is not too demanding, you have the capacity to produce high-quality protein. That is a very promising solution.”

Insects are often a traditional food but are rarely packaged and exported or imported.

It has been a tradition in Asian countries but they do not have regulations relating to the sale and export of insects.

In countries like China, insects are a common culinary ingredient, however, there is still no mention of this in food law.

The same can be said for places like India where insects provide an alternative to meat.

One insect which is common in Assam’s indigenous communities is red ant larvae. They resemble puffy rice and have a sour taste.

People sometimes eat them raw, with salt and chilli but sometimes, they grind it into a paste along with spices to make a chutney.

Consumption is common but exportation is not.

While insects are becoming more prevalent as an item of food, there are still inconsistencies in different countries when it comes to being sold on the market and regulations.

In some countries, insects can freely be sold in shops with no issues but in others, there are no regulations.

Although it is an issue, more and more people are consuming insects as a snack or combining them into dishes.

Dhiren is a journalism graduate with a passion for gaming, watching films and sports. He also enjoys cooking from time to time. His motto is to “Live life one day at a time.”
Best Indian Takeaways to Order From for Lockdown
COVID-19 Impact on Desi Pubs in the West Midlands