One of the most warming foods is soup and Indian soup combines warmth with the intense spices of the cuisine. Here are 10 delicious recipes to try.

The result is a filling, yet slightly spicy and creamy soup.

There are a number of delicious Indian soup variations which are full of flavour and certain to warm you up, especially during cold days.

Soup is such a simple food but it is also one of the most diverse as they are so many types which range in textures and flavours.

It has also been known to have health benefits, especially when eaten during cold weather.

Indian soups have a plethora of flavour in each spoonful as they use ingredients which are typically used in Indian cooking and when integrated into a hot broth, it takes it to a whole new level.

While some soups feature spicy flavour and creamy texture, some dishes are native to the country’s regions hence, they are very popular in certain areas.

All guarantee to be a hearty meal when eaten with a piece of crusty bread or even freshly baked naan.

We show you 10 recipes which will appeal to all the senses. 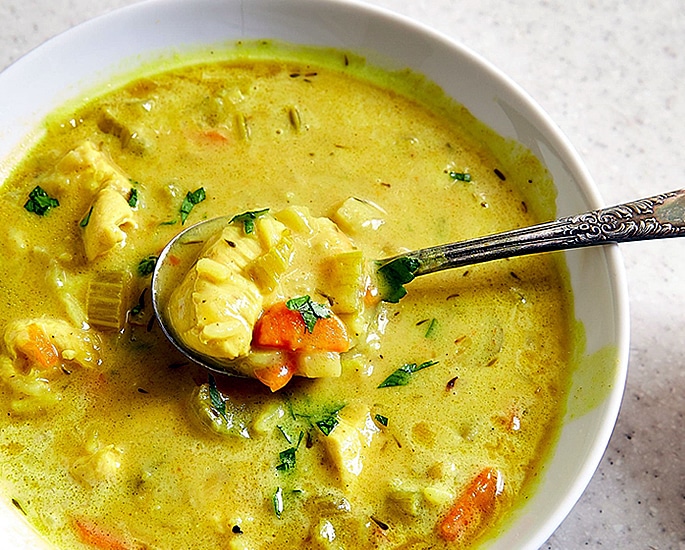 Although it is an English soup, it originated from South Asian cuisine. Mulligatawny soup is a product of the British Raj in India.

The British modified it so that it includes meat, though the local Madras recipe does not.

This recipe combines inclusions from the British and Indian. The chicken, which was typically used by the British, has been flavoured with Indian spices such as garam masala.

The result is a filling, yet slightly spicy and creamy soup.

While it can be enjoyed on its own, make it into a satisfying meal by serving it with rice or with some crusty bread. 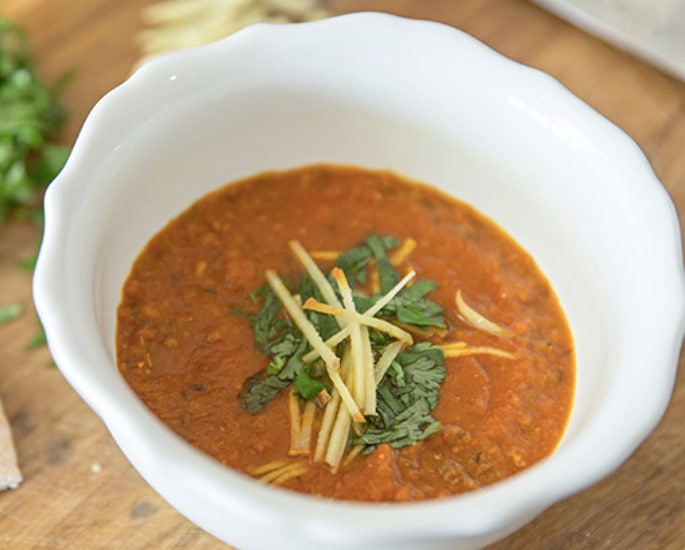 Ginger soup is one which is certain to warm you up. It is a soup to have when you are feeling under the weather.

Not only does it warm you up inside, but the flavours will also bring your mouth to life.

While ginger has many known health benefits, it is also very flavourful in this recipe as it adds a citrus freshness to offset the spice from the chilli.

If you want strong Indian flavours coming from your soup then ginger soup is one to try.

To make the Masala 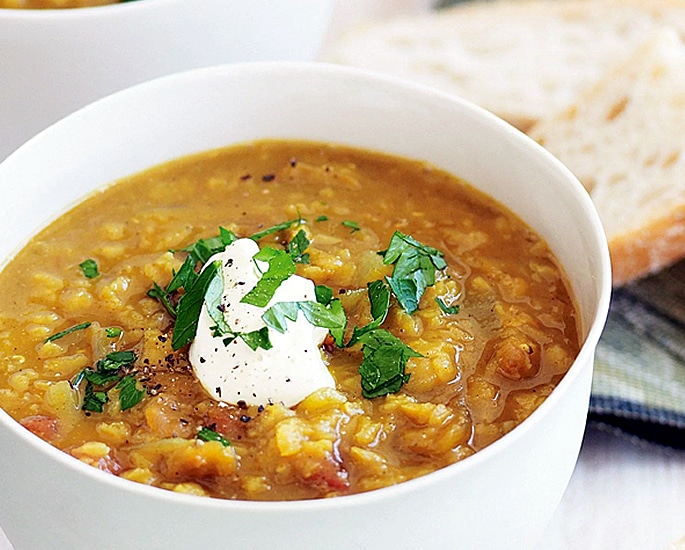 This curried red lentil soup is inspired by the Indian side dish daal. Not only is the dish full of flavour, but the texture of the lentils make it even better.

Fragrant ginger, cinnamon and cumin add lots of rich flavours to the thick creaminess of the lentils.

The wholesome ingredients are packed with protein, fibre and vitamins for a filling and delicious soup.

This recipe was inspired by Eating Well. 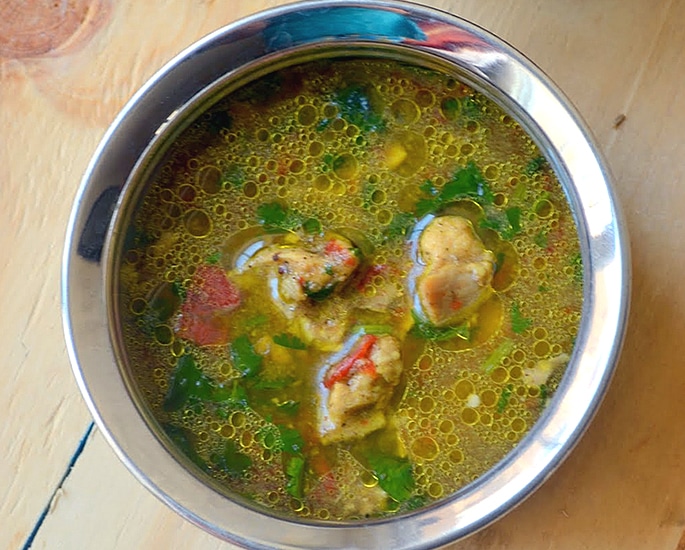 Chicken rasam soup is an authentic South Indian dish and the mix of ingredients create a spicy broth.

Although there is spice, it is not overpowering as the ginger adds a slight citrus flavour to it which offsets the heat from the spice.

The chicken used typically has bones and it remains moist when cooked and as part of the soup. You can use boneless, but it may not be the same experience.

Additional oil is not needed as the soup gets its oily texture from the chicken fat, enhancing the overall flavour.

This recipe was adapted from Spices and Aroma. 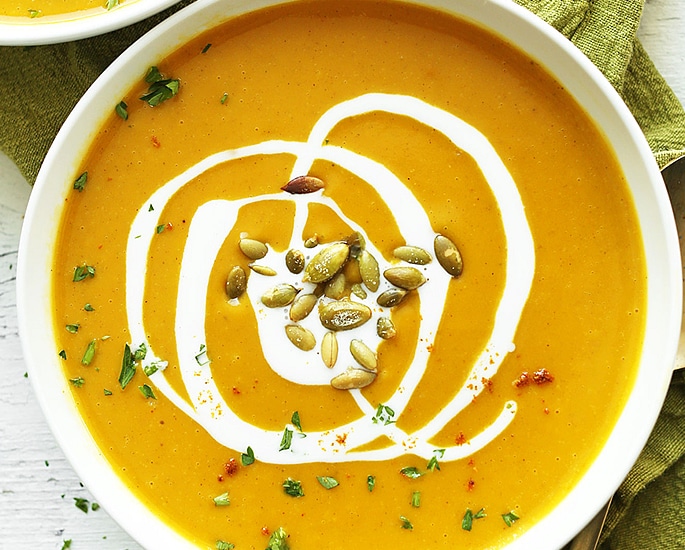 This is a dish which combines Indian and Asian flavours with the amazing vegetable that is the butternut squash.

It has a sweet flavour and the most vivid orange colour that entices you.

Roasting the squash brings out the sweetness from the vegetable. This blends well with the heat from the chillies.

The creaminess from the coconut and warmth from the cumin results in a hearty soup for you to enjoy. 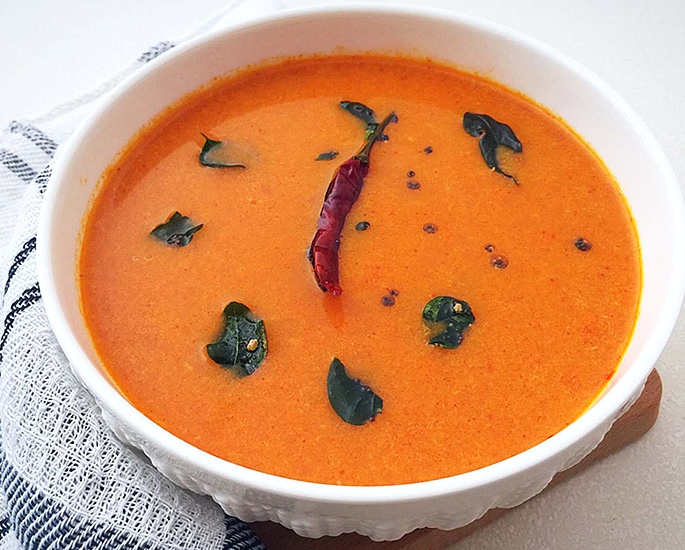 Tomato Saar is the Indian equivalent of the classic cream of tomato soup. The tangy vegetarian dish is popular in Maharashtra.

It is made by boiling and pureeing the tomatoes, which are then flavoured with mustard seeds, curry leaves and peppercorns.

Some versions use coconut milk to thicken the soup’s consistency, but this recipe sticks to the original ingredients.

Tomato Saar is ideally eaten with rice, but you can enjoy it on its own.

This recipe was adapted from Archana’s Kitchen. 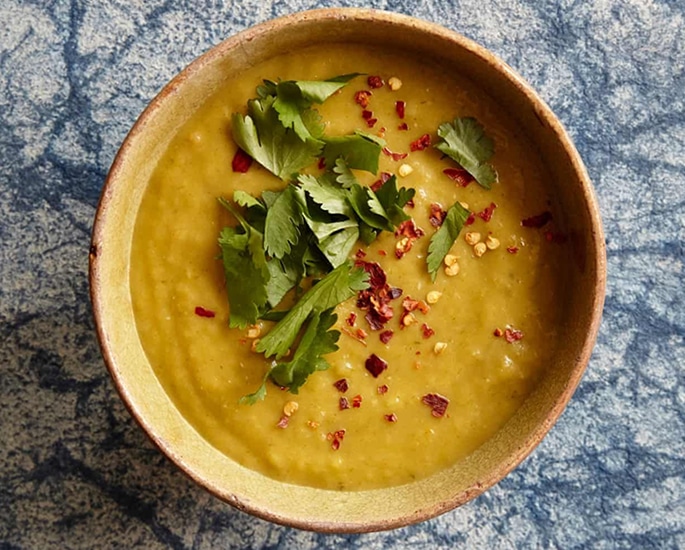 This recipe uses basic ingredients but they are prepared very well for a delicious Indian soup.

It is a dish which is all about great textures as the potatoes, leeks and carrots make the perfect combination of varied textures when trying this soup.

The subtle sweetness and earthiness from the vegetables offset the spices to create a mild flavour with only a hint of chilli.

Adding butter only adds to the richness of the soup.

This recipe was adapted from Chetna Makan’s recipe. 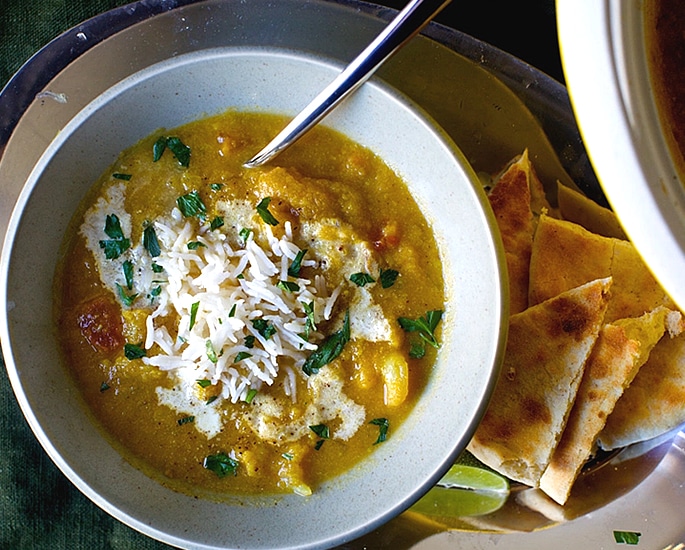 This dish is basically aloo gobi (potatoes and cauliflower) but formatted as a soup. The modified version of the classic Indian dish manages to maintain a range of wonderful flavours.

The use of chilli, garlic, ginger and cumin makes for a similar flavour to the traditional aloo gobi.

However, this soup is intensely seasoned to stretch the flavours into a full-bodied and hearty soup.

Add rice to this dish will make it ideal as a main meal but it can also be enjoyed with bread or on its own.

This recipe was inspired by Smitten Kitchen. 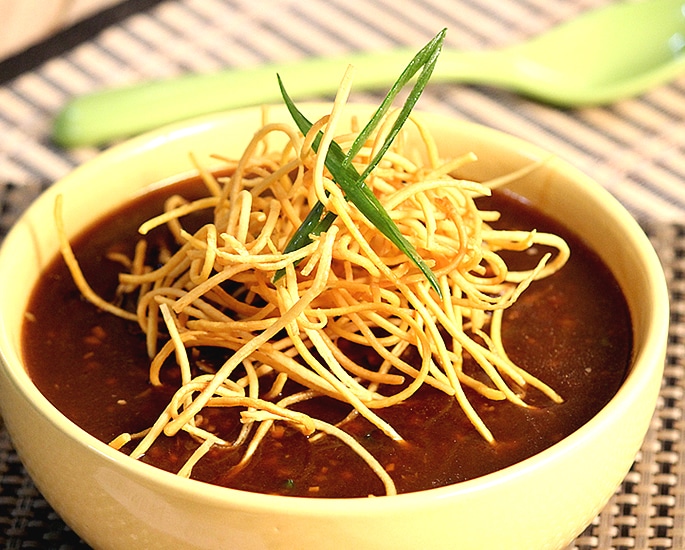 This soup is very popular in Indian and Chinese cuisine due to its simple preparation and spicy taste.

A mix of finely chopped vegetables is cooked in stock and thickened with cornflour. It is then mixed with Chinese ingredients such as soy sauce.

It is a thick soup with an extra bit of crunch as it is garnished with deep-fried noodles.

While it is typically a vegetarian dish, you can add chicken if you like.

This recipe was inspired by Sanjeev Kapoor. 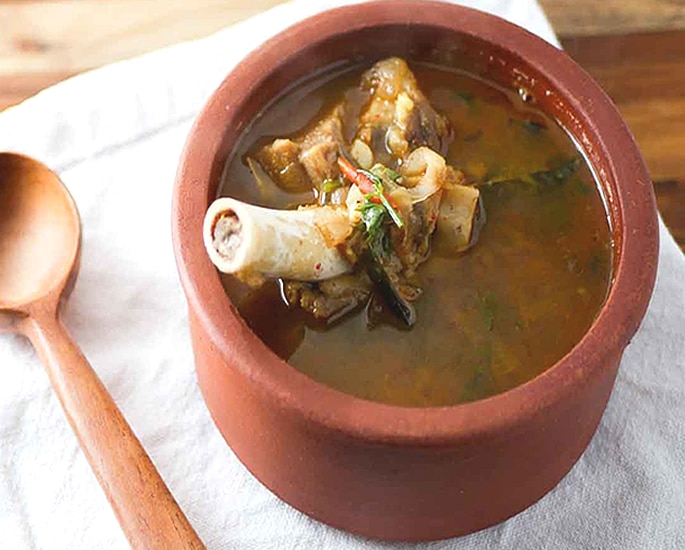 Mutton soup is very common in the southern regions of India and is made using by cooking mutton bones and meat with spices. This makes for an aromatic soup.

It is a mild tasting dish and you adjust the spice level to your preference.

Its ingredients list boasts of curry leaves, turmeric and red chillies. They undoubtedly add to its taste and the mutton makes it extremely hearty.

This Mutton soup is perfect to warm you on a wintery day.

For the Spice Powder

This recipe was adapted from Kannamma Cooks.

There are a wide variety of soups to suit all taste preferences. Whether it is spicy, creamy or mild, there is something for everyone.

This selection of recipes features a range of delicious Indian soups which are all different but all promise intense flavours.

Some are richer in flavour than others but it is down to your taste. The recipes have listed specific spice quantities, but you can alter the amount.

The 10 recipes will hopefully provide you with a guide on Indian soups to make when you want a food to warm you up.